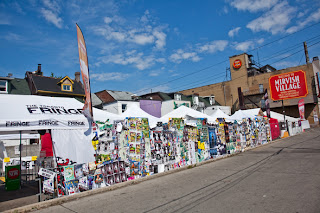 HAZARDS
We are besieged by hazards, real and imagined, those outside ourselves, and the ones inside our minds - from corrosive substances to not knowing which fork to use; from freefalling into love to meeting your personal Waterloo; from a meteor hitting earth to handwriting that begins to look like your mother’s, even though she’s left-handed and you are right-handed. HAZARDS, a one-woman show created by New York Times best-selling author Mina Samuels, will play at the Helen Gardiner Phelan Playhouse as part of the Toronto Fringe Festival July 5-13, 2013.

Inspired by the warning signs we encounter every day, HAZARDS dives into the chaotic soup of our minds, exposing our worries, from the personal to the universal, and our deep-seated fear of humiliation if we are “found out.” A performance piece in the absurdist tradition, HAZARDS combines spoken word with 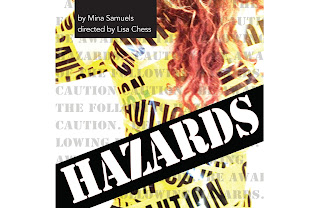 sometimes-frenetic, sometimes-beseeching movement, bringing us face-to-face with the question of our own significance in the universe.  And the answer is: YES!

"Though nothing can bring back the hour
Of splendour in the grass, glory in the flower,
We will grieve not, rather find
Strength in what remains behind."
~ William Wordsworth

Two lovers, haunted by their former romance, see each other again after many years. Have the years apart brought anything more than pain and emptiness?  The Remnants present INGE SNAPSHOTS: MID-AMERICA MID-CENTURY, two of noted American playwright William Inge’s one-act plays - BUS RILEY’S BACK IN TOWN and GLORY IN THE FLOWER - performed as a double-bill at the Helen Gardiner Phelan Playhouse Theatre as part of the Toronto Fringe Festival July 3-13, 2013. T

Can coming to terms with the past bring hope for the future? Welcome to INGE SNAPSHOTS: MID-AMERICA MID-CENTURY. Playwright William Inge explored the same ground in two different versions of the same story - one a youthful reunion set against the optimism of early 1950’s America, and one through a more mature lens, set against the burgeoning change of the late 1950’s. INGE SNAPSHOTS offers an elegiac portrait of small town life, the fullness of first love and its aftermath. Presenting both plays with the same acting company, in a twist on the old model of repertory theatre, The Remnants ask the question:  How does a reunion change when a pair of lovers reunite later in their lives? How does time affect feelings of loss and regret? 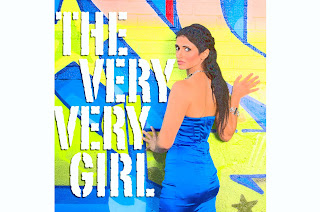 “There is no greater agony than bearing an untold story inside you… I can be changed by what happens to me. But I refuse to be reduced by it.” ~ Maya Angelou

How do you piece yourself together after years of hurt and pain? Can you overcome trauma?  Gayatri Productions presents THE VERY VERY GIRL, a powerful one-woman show by Julie Brar, playing  July 5-13, 2013 at the Annex Theatre as part of the Toronto Fringe Festival. Inspired by real-life experiences, THE VERY VERY GIRL is about  identity and the formation of self.

Stripped. Deprived. Made bare. How do you go from a strict Sikh upbringing to stripping in bars across Canada? How do you navigate the distance between the girl you were, the woman you’ve become, and somehow find your way to the person you want to be? At the age of 15, THE VERY VERY GIRL makes the difficult decision to leave her traditional Sikh family - a move which frees her of abuse but leaves her feeling lost, alone and desperate.  She tries to find her way in increasingly dangerous places, through sex, alcohol, and drugs, working in strip joints to make her way. THE VERY VERY GIRL follows one young woman’s search for freedom … and the many missteps she makes along the way.

“You gotta figure out what you’re gonna do with the dark stuff. Cause believe me, you got it. We all got it.”

Red Canoe Studio and Raccoon Productions present SOLO: A BOY’S JOURNEY, a one-man show about male rites of passage created by Jerry Brodey and Robert Morgan, playing July 4-14, 2013 at Tarragon Extra Space as part of the Toronto Fringe Festival. Inspired by a true story, SOLO: A BOY’S JOURNEY explores the nature of violence, gender and racism and ways to offer hope to today’s youth.

Two teens in crisis. A nervous social worker. Can anything save them from themselves on this foray into sacred Native land? Welcome to SOLO: A BOY’S JOURNEY, by Toronto-based Red Canoe Studio. A melding of myth and personal history, SOLO tells the tale of two teens in trouble with the law who come together on a canoe trip with their social worker in Canada’s North. This journey leads the boys away from their chaotic childhood and into a world that is both frightening and life-changing. Add a loud-mouthed raccoon trickster and you have a combination of high drama and sharp humour that keeps this one-man show balanced on the edge.

JUST LIFT YOUR FEET by Heather Allin
A woman encounters a dying animal on a lonely road, and realizes she is facing the loss of something within herself. Part myth, part reality, JUST LIFT YOUR FEET is a mesmerizing fable of a woman, a creator, an artist who longs to deeply connect to others, to embrace and embody life… but suddenly realizes the connection, the embrace… is gone.

“Creativity is what gets me up in the morning. It’s the soul and heart of my life and living,” says Toronto actor and emerging playwright Heather Allin. For Heather, living a life without living creatively is a kind of starvation.  “It feeds us, nourishes us, and inspires us. It calls us to relate to others, but more importantly, it 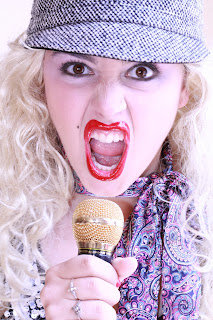 calls us to relate to ourselves.” It is this view of life and the importance of the creative experience that is the subject of her new play, JUST LIFT YOUR FEET, due for its debut in July at the upcoming 2013 Fringe Festival.

NOBODY'S IDOL by Alexandra Lean
Does everybody really want to be famous?  How far would you go for fame?  Alexandra Lean Productions presents NOBODY’S IDOL, a fun, fast-paced musical created by Alexandra Lean, playing July 4-13, 2013 at the Randolph Theatre as part of the Toronto Fringe Festival. Come and spend 90 minutes with Fame as he hosts the singing competition where he is the grand prize.

A lifetime of fame. That’s the guarantee for the grand prize winner in NOBODY’S IDOL, an irreverent musical parody that dives into the conflict between the “nobodies” and “somebodies” of our pop-culture world. Inspired by this magical promise, misfits and wannabes duel with their voices at the world’s biggest televised competition.  From pop to hip-hop to rock n’ roll, this new musical bursts onto the Toronto scene with gorgeous voices, great dance numbers and a twisted plot that will pin you to your seat – who will have it all? In a world divided between “somebodies” and “nobodies”, who is judging whom?

Once burnt, where do you find the fire and passion to rediscover self-worth? BURNT…and toasted! is a one woman musical show based on the life of performer Donna Greenberg. Through her journey, Donna discovers a courage that she never knew she possessed, and with it rises to rebuild a life filled with dreams she had never dared to dream before, where success is the sweetest revenge. BURNT…and toasted! is the story of a joyous mid-life rebirth. 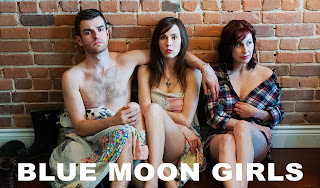 BLUE MOON GIRLS
Love. Friendship. Secrets. Fruitful Productions is proud to present BLUE MOON GIRLS, a story of childhood friends and the choices they face when love comes between them. Written by Jessica Lea Fleming, BLUE MOON GIRLS plays July 5-13, 2013 at the Helen Gardiner Phelan Playhouse as part of the Toronto Fringe Festival. Tickets are available beginning June 17 via www.fringetoronto.com, by telephone at 416-966-1062 (ext.1), or at the door.

Julie and Sonya meet as teenagers in the small Métis -French town of Blue Moon, Ontario. Complications arise when they both fall in love with Christian, and sacrifices are made by all. Heartfelt and funny, BLUE MOON GIRLS asks: What is real love? …and perhaps more importantly: What does it cost?