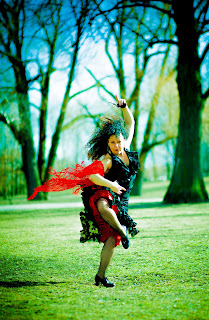 Featuring the artistry of internationally acclaimed dancers and choreographers, Dusk Dances continues to bring joy to audiences of all ages. Hosted by Dan Watson, this year's program features new works from Canadian artists with an immense breadth of experience:

- Susie Burpee (Toronto) and tiger princess dance projects with “The Last Round”.
A new work telling the story of two long-time archrivals who meet in the boxing ring for one final round. This piece is performed, fittingly, by long-time dance partners Robert Glumbek and Yvonne Ng.
- Melanie Kloetzel (Calgary) and members of the Canadian Contemporary Dance Theatre (Toronto) with an excerpt from “The Alice Odyssey”, examining the strange, and often violent, maelstrom that lurks in children’s fantasy worlds. 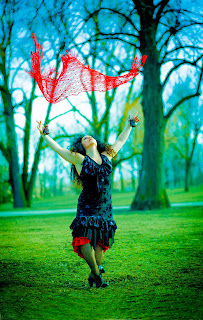 Dusk Dances is an outdoor dance festival that brings high quality contemporary and traditional dance to public parks. As dusk descends, a theatrical host leads the
audience - which invariably includes children, dog walkers and local residents - to eclectic dance pieces that unfold in different areas of the park. Choreographers from various backgrounds are invited to create a 10-minute dance piece inspired by the park’s natural environment. Audiences are invited on a pay-what-you-can basis to an innovative site-specific festival, which is not only an artistic event but a social and cultural one as well. 2013 will be Dusk Dances’ 19th season.

Images of Carmen Romero at Withrow Park by John Lauener