at the Art Gallery of Mississauga until September 7, 2013:

P Mansaram    Past | Present
Print, collage, photography and drawing from 1966 - 2013 explore the experience of reinvention and “being.” 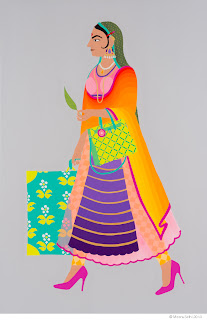 011+91 | 011+92
Telephone calling codes of India and Pakistan initiate a critical discourse on Locational Identity and home.

Also on view:
XIT-RM | Alice Wang: The fallacy of misplaced concreteness
Tenses speak to each other in artist Alice Wang's video. An XIT-RM project by guest curator Erik Martinson.

The colour and movement of South Asia has become one of the threads of Canadian cultural life and the summer show at the Art Gallery of Mississauga showcases that spirit through the work of artists at various stages of their careers.

Past | Present is the first retrospective of artist Panchal Mansaram's work and includes pieces completed between 1978 and 2011. 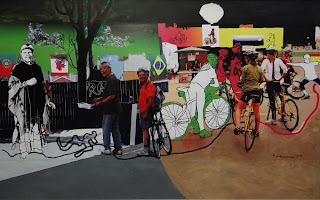 Panchal first came into contact with the Toronto art world in the late 1970s. He met Marshall McLuhan around the same time and the two formd a life-long friendship built upon ideas, art and dialogue. (As a note peripheral to the show, he was also my high school art teacher at Glendale High during a brief stint at a teacher.)

The show includes photographs, letters and other archival material along with his bright and beautiful works in digital, painting, prints and mainly collage, an art form he uses as a wondrously flexible medium.

"The work of Mansaram presents a natural dialogue of the East and West." - from a descripton by Marshall McLuhan

His pieces suggest motion and fluctuation, using Indian imagery with flashes of Western culture - English words among the Hindi script - bits of newspaper articles, Trudeau and Gandhi on the same page. A print of the Ottawa Market includes rickshaws and a notice about meditation. He offers a layered obervation of cross cultural permeation rather than pat conclusions; a look at the vitality and movement.

There are many pieces to enjoy but some favourites: Rear View Mirror No. 80, including Batman and Indian mythological figures. I also loved On the Way to Udaipur (2009 - in acrylic accentuated Mansamedia gliclee on canvas) with its figures of women and a boy in perspective down a street. The image is mainly photographic but sketched in some areas; it hums with life and movement. 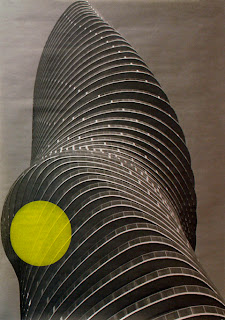 011+91 | 011+92 - based on the telephone calling codes of India and Pakistan - expands on the ideas of identity in the work of several younger artists. Avantika Bawa is fascinated with the modern architecture of Mississauga - those curvy Marilyn buildings and a bright yellow ball as an installation that shows up in the images.

I also liked Joshua Vettvelu's wood and dirt installation Unsuitable Vessel (Dad's Ghosts) 2013; it had both a poignant and monumental presence. Also striking was Sumaira Tazeen's All That Glitters IV - gold dots that swirl in a pattern on the wall.

It's a very enjoyable show over all that looks at the South Asian identity in Canada; one that retains its unique character even in contemporary North America.
art gallery of mississauga canadian art collage contemporary art indo canadian artist marshall mcluhan south asian artists