on July 28, 2013
I got an email introduction from Rotem Hecht, a young Israeli composer a while ago and slowly, bit by bit (not being proficient in Hebrew myself!) I've been piecing together something to post about him. 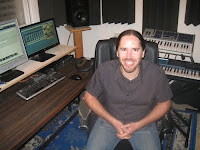 TEL AVIV - Rotem Hecht is a composer, arranger, music producer, sound editor (at Sound Post Frodkshin) and more - everything to do with creating music, sound design and recordings. He has worked as a Composer and Sound Editor on TV series, movies, video games, commercials, plays and shows and today owns  his own business under the names RH Studio and Theta Music .

Rotem was born in a kibbutz in the north near the Lebanese border, where the age of eight he started to play the piano and quickly fell into the world of music. He began arranging compositions for various musical instruments in the sixth grade and at age 13 he was playing jazz, Beatles, European classical music and had started to learn music theory. He also played in 3 different bands.

His stage career began at age 16, when he started to perform in Israel with singing groups as a pianist even as he was still learning music in high school. By age 18, he'd learned to play the piano and managed to learn the guitar, drums, saxophone, clarinet, accordion, working with synthesizers and Skoonsrim. "I'm not bragging," he says, "I just loved to play."

Music and sound design for Storm Of Magic game by Shamrock Games from Russia.
You can download the game for free for your Apple / Android  device from here


At 18 he moved to Tel Aviv, "the center of things." Once settled in, he continued to play with various artists and singers and began recording. "At 22 I had my eye on a new synthesizer out and hop!!! I found myself with a whole studio equipment. (It's addictive)," he says.

He began to compose his own music. "Here and there things went and I found myself working for a living at it mainly as a television composer and arranging songs artists. While working I also do mixing, editing, sound post Frodkshin and more and more and more ...." Diversity is the salvation of every creative freelancer.