In Texas, they like their legends. The Alamo, Sam Houston, even the Dallas Cowboys. And down in San Antonio they have another: the Krayolas, the band started in 1975 by the Saldana brothers, a pair of 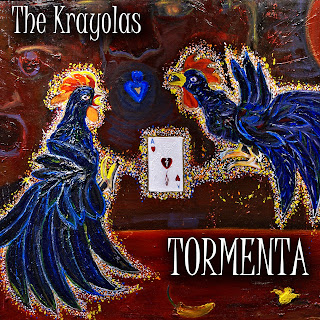 Mexican-American teenagers in love with powerpop. The great Augie Meyers, the Texas Tornado himself, calls them up to go in the studio with him, and Little Steven, Dave Marsh, and Ben Fong-Torres think they’re the coolest thing since an iced bottle of Lone Star.

With the new iTunes album, Tormenta (Box Records; release: July 30, 2013; available now on iTunes), the Krayolas let the world in on the secret Texas has been keeping. The band will take the East Coast by storm in early August, with concerts in Richmond VA, Washington DC, New York, and Asbury Park NJ.

“Our moniker was the Tex-Mex Beatles for many years,” observes drummer David Saldana. They were inspired by the Fab Four, the Who, all the great 45s of the 1960s. They toured with Nick Lowe and Joan Jett and shared stages with local heroes like the Sir Douglas Quintet ,the late Stevie Ray Vaughan, and the West Side Horns. As guitarist/singer (and admired music journalist) Hector Saldana puts it, “Our heart and soul are in San Antonio. We have a Mexican influence and this is a Mexican town. There’s always been a vibrant music scene and we’ve been part of that.”

For the Krayolas, the whirl lasted until the 1980s, then the band went on hiatus until 2008. Since then they’ve been busier than they were before, releasing five critically acclaimed albums, being special guests at Austin’s SXSW and the State Fair of Texas, and hitting New York for gigs. The Krayolas are 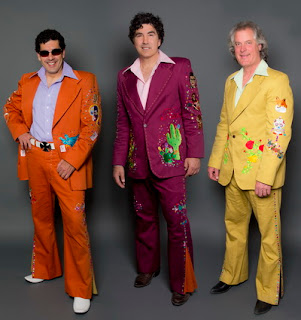 back and better than ever. Tormenta catches them on a new high, with 10 new songs and remastered highlights from earlier albums. It’s the perfect introduction to your new favorite powerpop band, with memorable melodies, harmonies to make your heart beat faster and, of course, choruses that will stick in your mind like Velcro.

“The songs are better than ever,” Hector says. “It’s a different message that reflects the world we look at.” And there’s a deeper knowledge of their roots and heritage, too. “Piedras Negras,” for instance, is a rewrite of a 1954 corrido by Santiago Jiménez and featuring his son, the great accordion player Flaco Jiménez. “We do it Krayolas style, but then, when the track fades out, you hear the original track.”

“Fruteria (The Fruit Cup Song)” “sounds like it tastes,” Hector explains with a smile. “There are Mexican fruit stands here that sell fruit cups for $2.50, they have wild Mexican music playing. We tried to capture that.”

There’s a deeper sense of the world on Tormenta – the cut “Tony Tormenta” is about “the cancer of the drug wars down here” – while “Americano,” “Dirty Mexican,” and “Home” “are all about us.” But even an unflinching look at the world is tempered with compassion (“Home”) and wrapped in taco pop joy.

“Many bands want to be themselves as young men when they re-form,” David reflects. “We decided to learn to be in the present moment. We’ve gone with the flow to make the music.”

But those young men do come out to play again on a cover of the Ramones’ “I Wanna Be Your Boyfriend” (it’s also on the disc in Spanish – “Quiero Ser Tu Novio”) that’s been breaking out on radio. 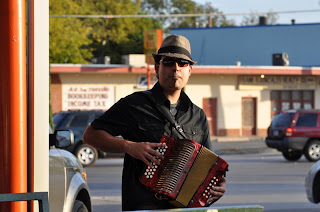 “When we were young we played a festival here put on by a local radio station,” Hector recalls. “A DJ gave us a box of albums and the Ramones was in there. It blew me away. We tapped into the fun part of things and the song fit us to a tee. It’s so simple and catchy. And with the Spanish version, even people who don’t know a lick of the language hook into it.”

It’s full of energy, the sheer energy of classic pop. But the secret of the Krayolas is that they’ve never forgotten the power of song. Five years ago it all came back to them, when Augie Meyers called up. “He said he had a song he’d record and play on with us. You don’t say no to that, not to someone like Augie. This is the guy from the Texas Tornados. Dylan calls Augie’s organ his magic box. The session took us back to when we made our first record, everyone in the same room.”

That’s the spirit that propels the Krayolas today. Not so much re-formed as reborn. “We’re a rock ’n’ roll band. We’re energetic. You need songs that get over,” reflects Hector.

And as Tormenta shows all too clearly, the Krayolas have a very deep well of songs. The best-kept secret in Texas is ready for the world.