Scotiabank BuskerFest in support of Epilepsy Toronto
August 22-25, 2013
throughout the Downtown Yonge Neighbourhood from Queen Street to College Street 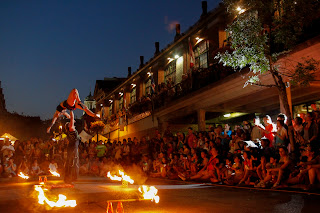 running Thursday, August 22 to Sunday, August 25 in the Downtown Yonge Neighbourhood. More than a million people are expected once again to attend the festival, which has been moved to its exciting new location along the Yonge Street corridor from Queen St. to College St. and surrounding areas - including Trinity Square Park and Yonge-Dundas Square. Yonge Street itself will be dedicated to pedestrians beginning at 6pm on Thursday, August 22 and running through to the end of the festival on Sunday, August 25.

More than 100 of the best street performers from Canada and around the world will excite and amaze Torontonians and tourists alike at the festival's new location. Among the terrific new acts coming for their first time ever to Scotiabank BuskerFest are:

Australia's Natural Wings, which use stunning aerial imagery and acrobatics to fly against the odds. Their show titled Elements is a non-stop aerial spectacle, as they journey through the elements - water, wind, earth and light - to leave audiences spellbound. 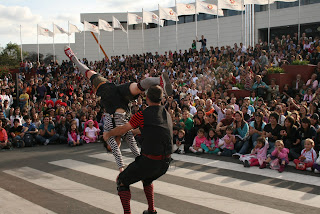 Duo ComicCasa, a super funny Swiss/Israeli couple delight audiences with their performance about love and the circus - for a show about their love for circus! Their unique style of physical theatre and top-notch circus skills underlines "NOTHING IS IMPOSSIBLE!"

From the United Kingdom comes Rob Roy Collins, an impressive comedic escape artist and acrobat who literally finishes his show on a high as he escapes from 20 metres of steel chain and handcuffs on top of a 12-foot ladder!

Canada's Catwall Acrobats from Quebec City teeter on a teeterboard apparatus that propels them up to 9 metres high in the air, defying the laws of physics! They spin in all directions (over 3 times in one jump!) all the while entertaining with humour and jaw-dropping acrobatics!

Gabriel Angelo (aka MasterBlaster G - The San Francisco Trumpet Kid) is not your average 14-year-old! He is an impressive trumpet-playing, tap-dancing wunderkind who will knock your socks off! His charisma and talent have already landed him on television's The Ellen DeGeneres Show.

And some of the fabulous acts returning to Scotiabank BuskerFest include: 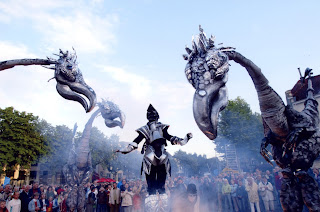 Rrrragggghhhh!!!! The Sauruses are back! All the way from the Cretaceous Period, by way of modern-day Holland, these beautiful, larger-than life sized dinosaurs are absolutely thrilling for audience members of all ages - just watch out for snapping dino jaws!

On the music front, Toronto's deVah Quartet, who performed at the 2015 PanAm Games launch, will rock the fest once again! This all-female, electric string quartet lays down heavy grooves as they perform original and cover rock music.

Previously announced new acts, both from Canada and around the world, include: 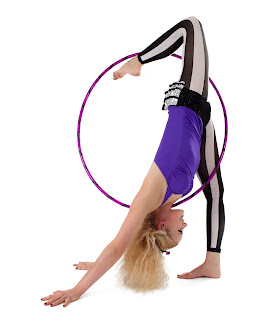 From the Netherlands: Lisa Lottie is a world-class hula hoopist who "Bends it like Barbie" with super stunts of flexibility and a finale of the most dangerous hula hoop trick in the world! The Flying Dutchmen (one half of whom is Canadian) are The Rolling Stones of street performers, doing their last tour... again! Performing together since 1989, these old school comic geniuses are considered heroes in the world of international street performance and this is their monumental 'comeback tour.'

From Brazil: Diogo Alvares is a Master Manipulator who performs a silent show with a musical backdrop using incredible manipulation skills with cards, billiard balls and cigarettes to create a truly unique magic act.

From Australia: Twisted Designs creates Monsters! These giant balloon creations may look frightening, but they survive on love and give out bubbles and balloons in exchange for hugs and laughs, cuddling everyone from babies to grandparents.

From the United States: Chris Capehart is an accomplished veteran performer who started on the streets of New York City 40 years ago with his interactive comedy-magic show that entertains all ages from ages 3 to 99! Jonathan Burns is a hilarious and flexible comedian who impresses with his unusual talents (which include squeezing his entire body through a toilet seat!) and was recently featured on the Jay Leno Show and the Late Show with David Letterman. The Twin Tango is a combination of silent clown, dance, Chinese pole and a funny love story that charms the whole family!

From Germany: This year's festival features its first ever World Champion Living Statue! Germany's CANDYman dispenses a lot of - guess what? - CANDYs! This artificial salesman of sweets plays with the audience in sync to music with surprising tricks!

From Toronto: Alissa Vox Raw - think doo-wop band in a box - as Alissa Vox finds new and creative ways to express old a capella styles with just a loop station and her voice. An entire choir seems to emerge! Nathaniel Rankin, an international award-winning magician, mind-reader, juggler and circus artist, entertains with his show "Borderline Madness." Arashido Taiko is a traditional Japanese drumming (Taiko) group whose name means "The Way of the Storm." The most exciting acoustic band in town! 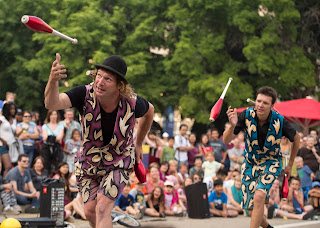 o Sweden's Charlie Caper won Sweden's Got Talent since last appearing at the festival in 2008 as well as a silver medal at the 2009 World Championship of Magic. In a magic duel between Harry Potter and Charlie Caper, the winner would probably be Harry - but only just...

o The USA Break Dancers were the 2009 Street Performance World Champions in Dublin, Ireland and have won 7 People's Choice Awards at fests around the world. They return with a high-energy interactive new show - Flow Like H2O, an action-packed, break dance show like no other - featuring Cirque Du Soleil performer Julio "Klown" Santiago!

Other returning acts from around the world include Pete Sweet whose show "Meet Pete" is a hilarious display of danger, charm and technical virtuosity incorporating slack-rope acrobatics, juggling, singing and dancing (U.S.A.); Pyromancer, a must-see fire-breather from the Netherlands; Hungary's Bence Sarkadi's Theatre of Marionettes; and Montreal-Australian duo The Giant Seagulls who rummage in bags and pockets, steal food and generally incite chaos and shrieks of laughter wherever they go!

And returning local area favourites previously announced include Heather Chappell and Vince Peets, an engaging Toronto folk/roots duo (with a plethora of pretty penny whistles, a romping red guitar and a purple accordion named Violet) and Motion Device (from Bolton, ON) who make it a family affair as they rock out led by an 11-year-old girl singer, Sara Menoudakis, along with her 13 -year-old brother David, 15-year-old sister Andrea, 18-year-old cousin Josh and 19-year-old family friend Alex to make up one of the most unique rock bands on the planet!

More returning local area favourites previously announced include Toronto's own Scott Jackson, 2012 Canadian Beatbox Champion and finalist on Canada's Got Talent; Fireguy with his sophisticated fire-breathing and world-class devil sticks; the Funny Waiter who spins plates, pulls out the tablecloth from under a pitcher of water, and juggles rubber chickens; internationally acclaimed living statue Kate Mior captivates audiences through beautifully controlled narrative movement, or by simply standing still; Max T. Oz, with his humorous sleight of hand show; vaudevillian duo Mental Floss Slide Show bring acts and exhibits from the five corners of the globe - all with a little dash of snake oil; and of course, who can forget veteran busker Silver Elvis, Toronto's Memphis mechanical metal man who moves for money, honey - "thank you, thank you very much."

Admission to Scotiabank BuskerFest is by voluntary donation to Epilepsy Toronto, a non-profit organization dedicated to helping more than 40,000 Torontonians with epilepsy, and their families, through counselling, employment support, advocacy and education.

"Here in Toronto, 40,000 people live with epilepsy, and with the gate donations from Scotiabank BuskerFest, Epilepsy Toronto is able to provide the support our clients rely on," says Geoff Bobb, Executive Director of Epilepsy Toronto. "We're incredibly excited to be partnering with the Downtown Yonge BIA, to be bring the Scotiabank BuskerFest to their neighborhood and we're certain that the generosity of the spectators at our new location will only increase our ability to help the 1 in 100 people in our city living with epilepsy."

Buskers retain proceeds from "the hat" passed after their performances except for two special group benefit shows where proceeds go to Epilepsy Toronto: the 8th Annual Fire Show showcases the 'hottest' fire performers at the fest (Sat, Aug 24 at 9:30pm) and the Grande Finale (Sun, Aug 25 at 6:30pm) where the winner of this year's Metro's People's Choice Award will be announced. Both of these will take place on the Scotiabank Stage in Yonge-Dundas Square. 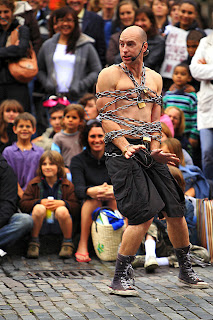 Images:- BUSKER 13 Dream State Circus - Australia's Dream State Circus,  a fiery act with fiery chemistry and Metro People's Choice Award winner at Scotiabank BuskerFet in 2009 & 2012, delight and entertain with dynamic performances of hand balancing, juggling, and incredible fire manipulations. A brilliant balance between comedy and danger.
- BUSKER 13 Duo ComicCasa - Duo ComicCasa, a super funny Swiss/Israeli couple delight audiences with their performance about love and the circus - for a show about their love for circus!
- BUSKER 13 Sauruses 1 - The Sauruses are back! All the way from the Cretaceous Period, by way of modern-day Holland, these beautiful, larger-than life sized dinosaurs are absolutely thrilling for audience members of all ages - just watch out for snapping dino jaws!
- BUSKER 13 Lisa Lottie1 - The Netherlands Lisa Lottie, a world-class hula-hoopist, will "Bend it like Barbie" with super stunts of flexibility and a finale of the most dangerous hula hoop trick in the world!
- BUSKER 13  Flying Dutchmen - The Flying Dutchmen (one half of whom is Canadian)  are The Rolling Stones of street performers, are doing their last tour... again! Performing together since 1989, these old school comic geniuses are on their monumental comeback tour....again! Winners of ten first prizes around the world!

- BUSKER 13 Rob Roy Collins - From the United Kingdom comes Rob Roy Collins, an impressive comedic escape artist and acrobat who literally finishes his show on a high as he escapes from 20 metres of steel chain and handcuffs on top of a 12-foot ladder!

Admission is by voluntary donation to Epilepsy Toronto