Director Jacob Vaughan will intro the film, followed by a Q+A
Opens theatrically in Canada in October

Darkly comic indeed  Bad Milo! stars Ken Marino as Duncan, a stressed out exec whose high pressure life, including his manipulative, crooked boss (Seinfeld’s Patrick Warburton), his controlling mother (Mary Kay Place), her much-younger boyfriend, his wastrel New Age dad (Stephen Root) and the expectations of his sweet wife metastasize to create a gremlin-like creature that emerges from his poop chute to wreak bloody vengeance on everything that plagues Duncan.

It is Duncan’s dark ID run amok. Diagnosed and identified by a hypnotherapist (Peter Stormare), Milo is a problematic product of expectations. His wife Sarah (Community’s Gillian Jacobs) is gently communicating that she expects more of her office drone husband. His boss Phil secretly looking for a stooge to cover his own dirty dealings – offers a “promotion” that involves being a corporate hatchet-man.

And the malevolent Milo makes no distinction between the guilty and the innocent when it comes to dealing with Duncan’s plagues of conscience.

Though it also has grace notes of another satirical cult favourite, How To Get Ahead In Advertising, Vaughan says his actual inspiration for Bad Milo! was David Cronenberg’s early horror film The Brood (about a woman whose anger causes angry, murderous children to be born from her skin).  He was describing that movie to Bad Milo! co-writer Benjamin Hayes when inspiration hit. 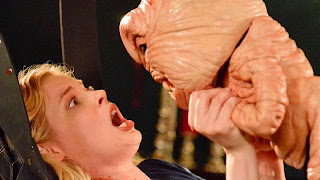 “I was telling Ben, ‘Now, that (The Brood) is something great.  It’s psychological.  There’s a metaphor there.  Wouldn't it be funny if we made a horror film about a creature that killed people?  And it should come out of the guy’s ass.’

“The whole idea made me laugh, so I knew, if I did this, it would have to be funny.  No way you can make a movie like this serious.”

Executive produced by the Duplass brothers (Cyrus), Bad Milo! opened to acclaim (and genuine surprise over its emotional sweetness), at the 2013 South by Southwest Festival.