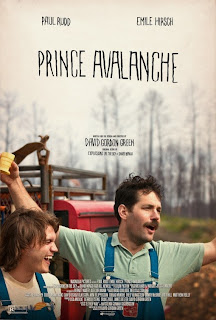 (Toronto) Driven by striking performances from Paul Rudd and Emile Hirsch, PRINCE AVALANCHE is an offbeat comedy about two men painting traffic lines on a desolate country highway that’s been ravaged by wildfire. Against this dramatic setting, beautifully shot by Tim Orr, the men bicker and joke with each other, eventually developing an unlikely friendship.

Funny, meditative and at times surreal, PRINCE AVALANCHE features a moving score by Explosions in the Sky, and David Wingo, and was loosely adapted from an Icelandic film called Either Way.

What helped draw Green to write PRINCE AVALANCHE was the theory that  there are two sides to a lot of people.  “I’m still 11 years old,” he says. “Every now and then, I try to pretend I’m 38, but it doesn’t really work.”

David Gordon Green, an American filmmaker, was born April 9, 1975. He has directed dramas such as George Washington, All the Real Girls and Snow Angels, as well as the thriller Undertow, all of which he  wrote or co-wrote. Since 2008, he has also transitioned into comedy, directing the films Pineapple Express, and Your Highness, as well as episodes of the HBO Comedy – Eastbound & Down.