DANCE: Access is a self-produced series administered by Danspace Project.

NEW YORK CITY - Jin Ju Song-Begin is a choreographer, dancer, and dance teacher from Seoul, Korea, whose work has been presented internationally in Korea, Japan, and the U.S. She founded Da-On Dance in 2012. Song strives to create and convey truthful experiences within the performers, through the stage, and

into the audience. Her vision is to offer impetus for thought, emotion, and something less definable. This evening marks the premiere of the company's first evening-length work.

Thirst is structured on themes drawn from Dante's Inferno, such as desire, greed, punishment, incessant chase, loss of self, suffering, and the nature of hell. As Song and dancers explore the possibilities offered by these ideas, they create tableaux characterized by thoroughly different structures and movement qualities.

The work features music composed by Jerome Begin and features musician Loren Dempster. The score is written for cello, synthesizer, and various sound-producing objects, all amplified and processed electronically. 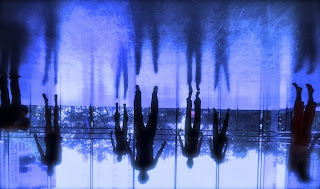 NB - the video is from their Kickstarter campaign - which has already reached its goal.