Love, Sex and Obsession - Buddies in Bad Tmes Opens 35th Season with Pig - on Stage to October 6 2013 in Toronto

BUDDIES OPENS 35TH SEASON WITH A PROVOCATIVE AND HAUNTING NEW PLAY ABOUT LOVE, SEX, AND OBSESSION

TORONTO - How far would you go for love? PIG follows three gay couples as they stretch the boundaries of their relationships in the quest for deeper levels of intimacy. Through acts of emotional domination, sexual submission, compulsion, and violence, these men delve into the space where the lines between shame, 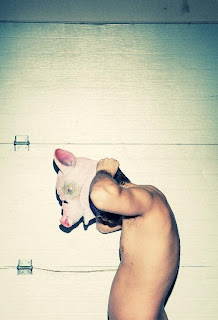 Buddies in Bad Times Theatre launches its 35th Anniversary Season with the world premiere of PIG by British playwright Tim Luscombe. Based in Berlin, Luscombe has had a successful and varied career abroad which has included productions of his play The One You Love at The Royal Court and Thomas Ostermeier’s Baracke Theater in Berlin, his musical EuroVision, which was produced by Sir Andrew Lloyd Webber, and his recent adaptation of Jane Austen’s Mansfield Park which has toured the UK to great acclaim. This production is directed by Buddies' Artistic Director Brendan Healy (Blasted, The Maids, Arigato, Tokyo) and features Bruce Dow (Of A Monstrous Child at Buddies, Jesus Christ Superstar at Stratford and on Broadway), Blair Williams (nineteen seasons at the Shaw Festival, Blithe Spirit at The Segal Centre, Julius Caesar at The Citadel), and Paul Dunn (East of Berlin at Tarragon, Dangerous Liaisons, Peter Pan, Anthony and Cleopatra at Stratford). The show also welcomes a fresh team of designers to the theatre, with set and costumes by James Lavoie, sound by Antoine Bédard, and lighting by Rebecca Picherack.

UK PLAYWRIGHT OFFERS A SHOCKING LOOK AT CONTEMPORARY SEXUALITY
In the tradition of “in-yer-face theatre” (pioneered by writers such as Sarah Kane and Tracy Letts), Luscombe offers a raw and confrontational take on sex and love, in a world where sexual liberation and new technologies allow us to explore the furthest limits of our carnal desires.

The play casts its three actors as a series of men striving to achieve deeper levels of physical and emotional intimacy in their relationships. From a couple struggling to maintain a monogamous ‘traditional’ marriage to a pair of sex workers caught in an abusive relationship and a sadist seeking increasingly brutal encounters with his partners, these men find themselves caught in webs of addiction, domestic abuse, prostitution, violent sex, and sexual violence. As the lives of these characters begin to intersect and overlap, the line between romantic 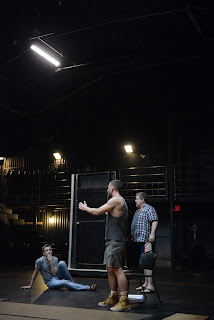 ideal and addictive hell ceases to exist and the audience is asked to consider whether the even most horrifying acts can be expressions of love.

Much like the revolutionary works of The Marquis de Sade and Anne Desclos' The Story of O, PIG presents a brazen look at our darkest physical impulses and stretches our understanding of sexuality, power, violence, and love.

PUSHING THE BOUNDARIES OF QUEER THEATRE  AND THE QUEER COMMUNITY
PIG addresses familiar and long-standing themes found in queer theatre such as HIV/AIDS, marriage equality, covert sexual behavior, discrimination, and civil rights, but recontextualizes these issues within a present-day reality. The play courageously tackles barebacking subcultures, “pig” sex, domestic abuse within the gay community, the eroticization of HIV/AIDS, extreme sado-masochistic relationships, and the relevance of marriage equality to gay culture. It takes a hard look at how the devastating forces of shame and discrimination persist in the community and continue to shape the ways in which we love each other. It asks tough questions about how the pursuit of civil rights can lead to assimilation, and examines how recent advancements in the management of HIV interact with the community's roots in sexual liberation.

Buddies is committed to presenting theatre that can be a catalyst for growth and understanding within our community. With this in mind, the company has partnered with The AIDS Committee of Toronto to present a special panel discussion about some of the sexual practices depicted in the play following the matinee performance on Sunday, September 22. Further discussions about the political, aesthetic, and social implications of the play will take place in post-show artist talks (specific dates to be announced on our website) and an online “Think Series” on Buddies’ blog that will feature prominent queer writers reflecting on the production (a list of guest writers to be released shortly). 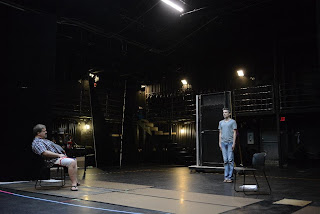