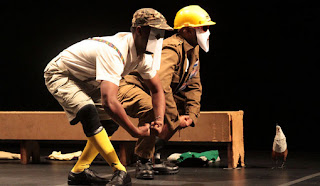 the South African apartheid state signed the Nkomati accord, a non-aggression pact. The Inkomati (dis)cord is Cekwana and Canda’s referral to this failed historical agreement, as well as the river that lent its name to it. In an attempt to break through artificial borders and traverse territories, using their own bodies, skins, identities and histories, the choreographers explore the internalized colonial boundaries that still alienate shared histories and aspirations. 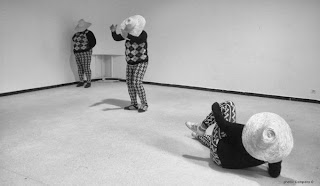 Bouchra Ouizguen
Ha!
Sep 27 - 28 at 7:30pm
Inspired by the quatrains of Persian poet and Sufi mystic Djalâl ad-Dîn Rûmî, Ha!, the latest creation by Bouchra Ouizguen, is an exploration of madness. Using the same working method that led to the success of Madame Plaza (presented at New York Live Arts in September 2012 as part of Voices of Strength), Ouizguen returned to Morocco, her homeland, gaining additional inspiration from the cultural terrain that has enriched the movement, ritual, singing and language in this new work.

Sep 27 at 6:30pm - Come Early Conversation:Aïtas and the Art of Vocal Rebellion moderated by Lili Chopra, Artistic Director of FIAF and Co-Curator of Crossing the Line