Toronto – The Canadian Opera Company launches its 2013/2014 season with a new production of one of the world’s greatest love stories, La Bohème. Puccini’s masterpiece of youthful flirtation, passionate love and 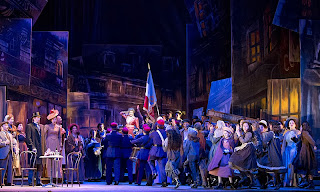 Canadian-born Tony Award-winning director John Caird (Les Misérables, Nicholas Nickleby), last with COC in 2007 to stage the monumental Don Carlos, premieres for the company this new production of one of opera’s favourite love stories. He’s joined by one of world’s best Puccini conductors, Italian Carlo Rizzi, who makes his company debut leading the COC Orchestra and Chorus through a score of soaring and impassioned orchestrations filled with dramatic intensity and beautiful melodies.

La Bohème is set in the raucous streets of Paris’s Latin Quarter in the late 19th century and explores the loves and lives of a group of young Bohemians. The COC production has cast an equally young group of singers, many Canadian, who are making names for themselves internationally. 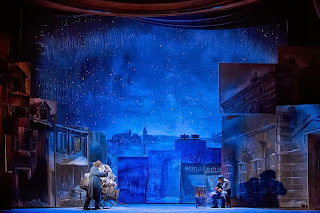 Already acclaimed for their renditions of this starring role, two recent graduates of the Metropolitan Opera’s prestigious Lindemann Young Artist Development Program make their COC debuts as the fragile seamstress Mimì: Italian soprano Grazia Doronzio and Canadian soprano Joyce El-Khoury (Oct. 9, 19, 27, 30). Doronzio, called “splendid” by the New York Times and a “fascinating discovery” by the Chicago Tribune, has made recent notable engagements at Oper Frankfurt, Hamburgische Staatsoper, Angers Nantes Opéra, Seattle Opera and the Metropolitan Opera. El-Khoury has earned praised from Opera News, Washington Post and The Financial Times, among other publications, for performances across North America and Europe, and recently made her recording debut with the BBC Symphony Orchestra at London’s Barbican Hall.

El-Khoury is double-cast in La Bohème. In addition to Mimì, she sings the role of the flirtatious singer Musetta for eight of the 12 performances of the COC’s production. Sharing the role of Musetta is COC Ensemble Studio graduate soprano Simone Osborne (Oct. 9, 19, 27, 30). A favourite with audiences and critics, Osborne returns to the COC after recent engagements with Opera Hamilton, Vancouver Opera and 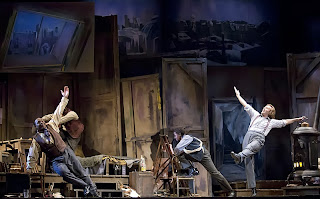 Carnegie Hall, appearing in the world premiere of the classical music show Viva Verdi! in Zurich and in the Saito Kinen Festival with renowned maestro Seiji Ozawa, as well a debut performance with the LA Philharmonic.

The role of the poet Rodolfo, Mimì’s lover, is sung by two rising young tenors, Mexican David Lomelí and Italian-American Eric Margiore (Oct. 9, 19, 27, 30). Lomelí has built a growing reputation in opera houses and concert halls across North America and Europe since becoming a first-prize winner of Plácido Domingo’s prestigious Operalia competition in 2006. First introduced to Toronto audiences in 2011 as the Duke in the COC’s Rigoletto, he returns in a role that “from both vocal and dramatic perspectives, you [would] have a difficult time finding a tenor more suited” (concertonet.com). Margiore recently made his European debut with Deutsche Oper am Rhein and is quickly establishing himself as an international contender in the principal Italian bel-canto and romantic tenor repertoire. He makes his COC debut as Rodolfo, a role for which Margiore’s been called “an ideal fit” (Opera News). 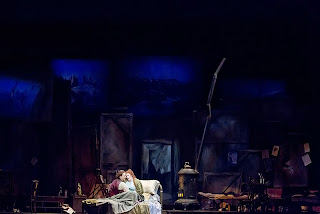 In the role of the painter Marcello, Musetta’s lover, are two standout Canadian baritones: Joshua Hopkins and, in a company debut, Phillip Addis (Oct. 9, 19, 27, 30). Last with the COC in 2005 in Carmen, Hopkins has been hailed as “an outstanding young baritone with a virile, vigorous yet velvety sound and an immediately evident dramatic authority” (Globe and Mail) and was chosen by Opera News in 2012 as one of 25 artists poised to break out and become a major force in the coming decade. A rising star on the international stage, Addis has performed in opera, concerts and recitals throughout Canada, the United States, Europe and Japan. He’s been called “a star in the making” (MusicOMH) and praised for his creamy, bright, smooth voice as much as for his spell-binding, daring, yet sensitive interpretations.

In addition to Marcello, Addis takes on the role of the musician Schaunard for eight of La Bohème’s 12 performances. He shares the role with COC Ensemble baritone Cameron McPhail (Oct. 9, 19, 27, 30), whose “impressive voice” (barczablog) had its company mainstage debut last season in the acclaimed production of Dialogues des Carmélites. 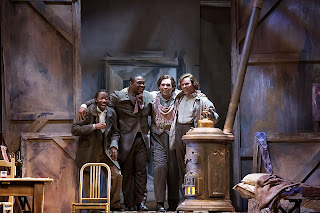 The role of the philosopher Colline is shared by two celebrated bass-baritones: American Christian Van Horn and Canadian Tom Corbeil (Oct. 9, 19, 27, 30). Quickly becoming a regular in the world’s most prestigious opera houses with a voice described as “a true balm of vocal happiness” (ResMusica), Van Horn returns to the COC after his 2012 debut in Tosca. Corbeil is praised throughout North America for his vocal presence and stage craft. Last with the COC in 2010’s Death in Venice, he returns after spending a recent season singing Lurch with the first national tour of Broadway’s The Addams Family Musical.

In creating this new production of La Bohème, Olivier Award-winning and Tony Award-nominated set and costume designer David Farley has taken inspiration from France’s Belle Époque to capture the romance and artistic brilliance at the heart of this opera. The set design, in particular, is conceived as a collage of canvases by the painter Marcello that frame the action within the opera’s changing Parisian locales. Michael Clark creates the romantic lighting design.

La Bohème is based on the 1851 Henri Murger novel Scènes de la vie de bohème, a collection of stories about bohemian life in Paris. While the opera was not a great success at the time of its 1896 premiere, it has since become Puccini’s best-known work and one of the most loved and performed operas in the world. The tale of doomed romance in Paris has inspired many books, films and theatrical productions. The most notable adaptation in recent history is the rock musical RENT.

This new production of La Bohème is a COC co-production with Houston Grand Opera and San Francisco Opera. The opera was last performed by the COC in 2009, and is sung in Italian with English SURTITLES™.

TICKET INFORMATION
Single tickets for La Bohème are $12 – $365 (includes applicable taxes). Tickets are available online at coc.ca, by calling 416-363-8231, or in person at the Four Seasons Centre for the Performing Arts Box Office, located at 145 Queen St. W. Check the website for other details.