A century or more ago, in cities like Smyra, Thessaloniki, and Istanbul, Greeks and Turks lived peacefully side by side during the waning years of the Ottoman Empire. People laughed and loved and sang together. In the bars and the hash houses, they played the music that was the root of what came to be called 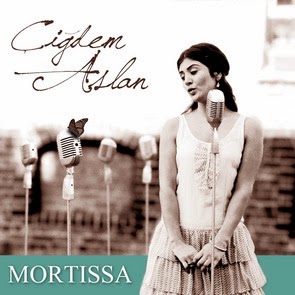 rebetiko, songs about poor people like themselves, the criminals and lovers, the musicians, the beauties and the strong women known as mortissas. Çiğdem Aslan (her name is pronounced Cheedem) reaches back to that earlier age on her debut solo recording, Mortissa (Asphalt Tango, Oct. 08, 2013).

“Most of the songs are in Greek,” Aslan explains,” and I didn’t know the meaning when I first heard them. It was the music I could relate to, I felt close to them even if I didn’t understand a word. Once I learned what they were about it was even better. Most of them are love songs. They’re familiar to me in the way they express things. The way a woman tells off her lover is similar to what I heard in Turkey.”

Rebetiko has always been the music of society’s outsiders, and Aslan can understand that very well indeed. Although born and raised in Istanbul, her parents are Kurdish and she grew up near Gezi Park, the scene of riots earlier this year, recalling that, “My neighbourhood was full of leftist groups. There were always police there. It was a ghetto, it wasn’t even considered Istanbul. So I’m an 'other,' too; I come from a minority background and that usually makes you more open and understanding towards others. My luck was that I encountered many 'others' to expand my vision.”

Music was always around and “culturally part of our daily life. When I went to secondary school it was in a Greek and Armenian area, so I heard their music. One of the songs on Mortissa is the second or third rebetiko song I learned, years ago.” 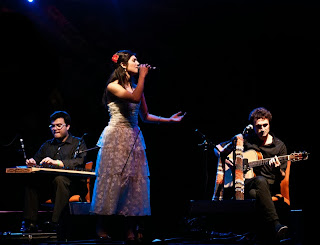 After completing a degree in English literature and singing as part of “a project exploring different minorities in Turkey,” Aslan moved to London, intending to do her Master’s. “But,” she explains simply, “I changed my mind and started to make music.” She became a member of Dunav, a band playing Balkan music, and began singing with the She’koyokh Klezmer Ensemble, who provide the music for three tracks on Mortissa.

“I’m the addendum,” she laughs. “They’re mostly instrumental. I saw one of their gigs and wished I could be part of it. That was three years before I joined. Some of them came to jam sessions with the SAOS Rebetiko band and then asked me to perform with them.”

The musicians who form the core for much of the album are mostly from the North London Greek and Turkish communities, although Nikolaos Baimpas, the wonderful kanun (plucked dulcimer) player and musical director whose playing on the album is stunning, often performs with prominent musicians back in Greece.

What brings them all together is rebetiko. Often described as the Aegean blues, it’s the music of the underclass, the people with nothing except love and life. Today, in this new age of austerity, there are plenty of people who can understand songs like “Çakici,” which celebrates the legendary Mehmet Efe, a thief who gave to the poor, or “Pane Gia To Preso,” an ode to leek – the slang word for marijuana. And, of course, there are the songs of the mortissas, the independent women who don’t behave as society expects and who give the album its name. Part of rebetiko is smyrneika, songs from the Aegean port city of Smyrna, which absorbed the influence of travellers from across the Middle East into its music. 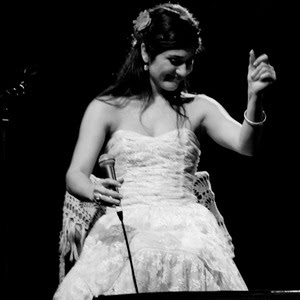 “The thing about the Smyrna school of rebetiko,” Aslan notes, “is that females were more dominant as singers, unlike Athens.”

But while Aslan might evoke the past with her voice, she has no desire to make it a museum piece. Her rebetiko and smyrneika are living things, full of tears and laughter that speak loudly and emotionally to today’s audiences.

“Otherwise there’d be no point,” she insists. “They’ve been recorded, they need changes for a contemporary audience. What I’m doing is adding details and highlighting the similarities between the cultures. Even something like a double bass in there makes it more modern. It’s adding your personality. What I’m doing is putting my feelings into the songs, trying to reflect what they make me feel.”

With Mortissa, Çiğdem Aslan crosses time, making rebetiko startlingly alive and relevant in the 21st century. As she says, “it shows there are no cultural boundaries in music.”