Sangria. It’s the Spanish national drink, a refreshing mix of wine, fruit, sugar, and brandy that’s been copied, around the world. But no one makes it like a native. Singer Rebeca Vallejo, born and raised in Madrid, understands that very well. 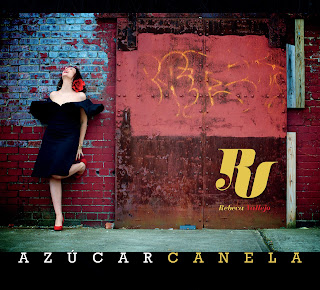 “My friends say they know my sangria as soon as they taste it,” she says. “It’s the kind of drink where anything goes, but as well as sugar, I use cinnamon as an ingredient. That’s my personal touch to sangria.”

But the music on her new album, Azúcar, Canela (which translates to “sugar, cinnamon”), is like her sangria, always Spanish but open to possibilities. Vallejo begins a U.S. tour October 13 with a New York City release party on October 27, 2013 with the support of SPAIN arts & culture (www.spainculture.us). The songs include a unique mix, immediately identifiable, drawing on her deep immersion in jazz, Brazilian music and the flamenco of her ancestors and always with that very personal, and very Spanish, flavor. It’s there not just in the vocals, but bedded deep, in the layers of sharp, inimitable flamenco rhythms that propel the music, the palmas (handclaps) and Vallejo’s own finger-snapping and body percussion.

That signature blend shines in her compositions. “Despertar” fires with the raw street energy of Brazil, powered by accordion, but the cajón and clapping put a swing behind Vallejo’s jazz phrasing. The parade of 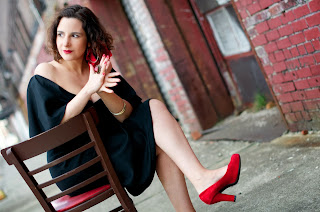 pain that inhabits “El Ciego Sol” finds an African rhythm and flamenco – inspired by a Spanish Easter procession walking hand in hand with the blues while “Canicas” is a trip back to the simple joys of that Madrid childhood.

“I find a certain pleasure in nostalgia, in the bittersweet and romantic,” Vallejo admits. “But that’s nostalgia used as a trampoline, not as a hammock! If I write about love it’s usually not in a happy way. ‘No Sabes,’ for instance, is an adaptation of ‘You Don’t Know What Love Is.’ That’s the dramatic Spaniard in me.”

But that track is just one of three adventurous interpretations on the album. “Verde Sobre Azul” offers her take on Miles Davis’s classic “Green and Blue,” while “Cravo E Canela” is sung in homage to one of Vallejo’s musical heroes, Milton Nascimento.

“I love Milton,” she explains. “His album, Clube da Esquina, was life-changing. And the song…a woman of clove and cinnamon, spoke to me. It was my grandmother. And it has a flamenco feel that I took full-on by adding a traditional flamenco rhythm called bulería.”

Flamenco. It was always there, even if Vallejo never fully appreciated it then. Both her grandparents and their ancestors had sung it As soon as she was old enough she left Madrid to go to university in Swansea, Wales (“Manic Streets Preachers went there. They were one of my favorite bands at the time”), where she sang professionally for the first time, and an event happened that would change her entire future - after the gig a friend gave her an Ella Fitzgerald compilation. “She was sure I’d like it,” Vallejo remembers. “ I did; it’s what 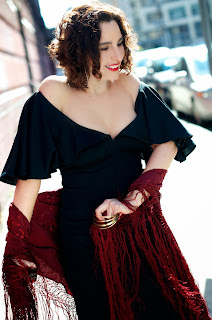 made me become a jazz singer. I knew I needed to study jazz.”

For her there was only one place to be: New York. A city to absorb jazz, to breathe it in where it lived.

Soon her sets in Manhattan clubs were incorporating the bossa novas she’d learned from her professional vocalist mother. They were well-received, so Vallejo added sambas to her repertoire. The more she performed Brazilian music, the more she came to love it. Finally she realized that she had to make a pilgrimage to Brazil. “I needed that, to internalize it, the rhythms, the language, the styles of singing and phrasing, the different genres, the culture, the traditions, the food…” Everything.

With that trip, she had both jazz and Brazilian music under her belt. But Rebeca Vallejo was about to return to her flamenco roots, thanks to an unlikely catalyst.

“I had a Greek bass player,” she recalls. “He was playing a lot of flamenco and started teaching us the rhythms and I felt the call back to flamenco I began listening to the music properly, and someone contacted me to sing for a flamenco dance company. I was so nervous before I went onstage! I worked with them for a couple of years but people said I didn’t sound traditional.” Hearing about a flamenco school in Sevilla, Spain, she contacted them and was offered a scholarship for a one-month intensive course.

“My teacher was in his seventies and very traditional. He kept trying to kick me into the non-Spanish class but I fought him on it. The very last day I did one of the pieces we’d learned, but instead of using the lyrics, I sang the melody of the song trying to imitate a saxophone; he finally got it. But I needed to learn the tradition to be able to do my own thing.”

All the pieces were in place and the woman who’d felt frustrated “because I could never sound like a jazz singer, a Brazilian singer or a flamenco singer” understood that this mix of styles was what made her music unique. Unique not only as a composer but as a singer with her mix of vocal techniques.

But one more factor crept into the mix. She performed a show with a pianist and her long-time percussionist David Silliman, but without a bass player.

“The first gig the three of us did, it sounded good,” she says. “We played more and it worked. It makes an original statement and we’ve created a sound of our own.” After experimenting with different pianists she began working with George Dulin, and, with Silliman, they’re the core band on Azúcar, Canela. But still no bass.“It’s an irony,” she laughs, “because I love bass. Basslines are the first thing I hear when I’m writing!”

It’s her sangria. Anything goes.

“Although I consider myself a jazz musician and jazz places a lot of importance on the concept of harmony, music,” she notes, “is essentially rhythm and melody.” With Azúcar, Canela, Rebeca Vallejo gives us a feast of both. A sangria of music. But with sugar and cinnamon, of course.