Even without reading the PR material to know what a swara is or speaking to New York City based jazz pianest Richard Bennett, the influence of classical Indian music on his latest release is obvious. It appears as 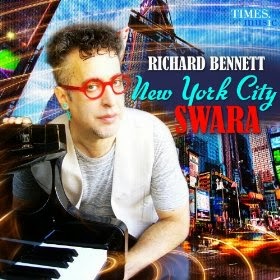 an organic thread of the music and in varying degrees, from the driving straight up jazz of How Brooklyn Sounds to the Indian steeped Savage Garden. "How Brooklyn Sounds is the freeest adaptation. It's taking it to the limit of the raga and still staying inside the raga," says Richard.

He's known for incorporating many influences into his compositions, including his work as part of a Greek traditional band, New Orleans second-line pianist, and leader of his own eclectic trio at Japanese jazz club, among other experiences. "It can be a little bit like a set of ingredients for cooking," he says. Indian music in particular has a certain public perception along with the sonic possibilities. "It's been found as very 'New Age' in the West and I was trying to avoid it." 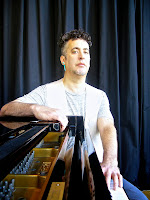 jazz drumming of Michael Wimberly. Budhkar is an integral part of the album's sound and has played with Bennett in India and throughout the U.S.

A swara is an individual note. In Indian classical music, the emphasis is on playing each note until you are done with it rather than focusing on the progression of notes as in Western music. It's a minimalist approach that Richard explores throughout the albums tracks. Raga actually means odour or hue, indicating the emphasis on how the notes are played rather than the pitch alone. He uses classical Indian ragas like the Call of the Swan Raga as a starting point. "It's a raga known for melodic development and you can hear it on the first two tracks."

Despite his history of cross cultural experimentation, Richard didn't necessarily have his own music on his mind when he initially went to India. Richard first landed in Mumbai when his jazz vocalist wife Paula Jeanine went to India to study with renowned singer Dhanashree Pandit-Rai - an artist who later ended up a collaborator. "I went to concerts every night. The concerts are free in India," he says. "I was immediately

meeting other musicians and playing with them."

He joined his wife as a student of Indian classical music. "I studied in India - on the voice," he says. "(My teacher) really didn't speak any English, so we didn't waste any time talking. They sing and you sing back. You don't stick at one space; you are constantly going on to the next level. In Indian music, if you're a great singer, you know pretty much everything there is to know." He points out that this comes in contrast to Western music, where a composer needs to know piano or guitar - not just voice - to fully comprehend musical structures. When it comes to composition, he immerses himself in the sound. "It's not just like listening to a tape here and there. When I'm learning a raga, it's playing all day. This is my world and I'm inside of it."

His collaborations with local musicians ended up as playing gigs - with one issue unique to the area. "I played keyboards at first," he remembers. "They don't have a lot of piano culture. When I got bigger and was playing concerts, no matter where it was, they always rented the same piano." This latest release, recorded last year, is his first on a major label in India.