On October 28th, 2013
May the Force be With Thee...
R.H. Thompson leads a cast of Canada's best performers
bringing a mash-up of Shakespeare and Star Wars to life
in support of Driftwood Theatre!
at Whistler's Grille

Toronto, ON. A short time from now in a pub very, very nearby…

Star Wars, one of the world’s most popular films, and William Shakespeare, its most enduring playwright: On October 28 (just in time for Hallowe’en) these two classics will be brought together by some of Canada’s 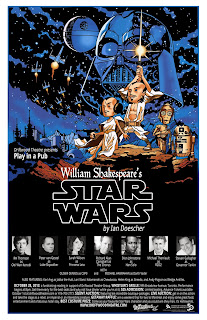 greatest performers for an evening of entertainment and ale not to be missed. Driftwood Theatre presents Play in a Pub: a reading of William Shakespeare’s Star Wars.

The reading is a fundraising event in support of Driftwood Theatre Group, Ontario’s longest-running outdoor, 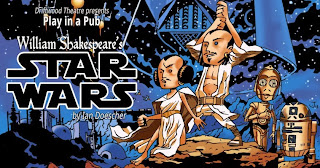 touring theatre company, which celebrates its 20th season of The Bard’s Bus Tour in 2014. Taking place just off the Danforth at Whistler’s Grille (995 Broadview Avenue), Play in a Pub: William Shakespeare’s Star Wars brings this must-see event into the informal setting of the corner pub, where the audience can enjoy the reading over a pint. Audience members will be able to get in on the action through a Live Auction offering three walk-on roles as rebels, imperials or interesting creatures. The event will also feature a Mini Silent Auction (featuring 10 boutique packages handpicked by Driftwood Theatre’s board of directors), a Getaway Raffle (win a trip for two to Montreal for some great food, entertainment and luxurious hotel stay) and Best Costume Prize (come as your favourite Star Wars character and you could win BIG).