Tarragon Theatre proudly presents
The Double
A TheatreRUN production and adaptation of a Dostoevsky novella
- two actors and one musician with a double bass collide in a schizophrenic feast of site and sound -
Opens October 23 and runs to November 24, 2013 (previews from October 15) 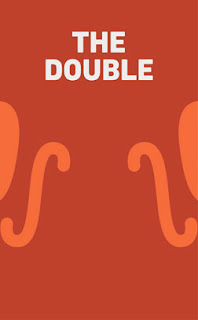 TORONTO - Tarragon Theatre proudly presents TheatreRUN's The Double, an hilarious and innovative adaptation of the Fyodor Dostoevsky novella of the same name, created and performed by TheatreRUN Artistic Director Adam Paolozza (who also directs), Arif Mirabdolbaghi (bass-player and lyricist of the award-winning Canadian progressive metal band, Protest The Hero) and international actor Viktor Lukawski.  A dark comedy about our deepest fears of losing our identity, The Double opens October 23 and runs to November 24 (previews from October 15) in Tarragon's Extraspace.

When are you no longer yourself? The anxious government clerk Golyadkin is plagued by a stranger who looks just like him, but is more daring, romantic and brash. This uncanny triangle between a neurotic, his doppelganger and a stand-up bass transports us to 19th century Russian high society and Golyadkin's labyrinthine search for his identity as he desperately attempts to fit in.

The Double combines Dostoevsky's brilliant prose with physical theatre and original music to create a theatrical Molotov-cocktail filled with laughter and pathos.  An exploration of alienation and paranoia, The Double speaks to our own fragile hold on reality in a time when our identity is as fluid as our facebook and twitter profiles allow.

The Double was nominated in 2012 for a Dora Mavor Moore Award for Outstanding New Play, with Andre Du Toit winning for Outstanding Lighting Design in the Independent Theatre Division. The full creative team returns for this incarnation which sees the script deepen after further development at 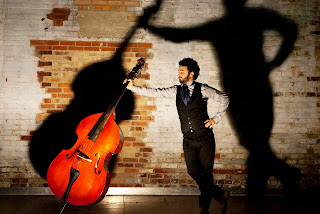 Dostoevsky seems to be a part of the cultural zeitgeist this year as British writer-director Richard Ayoade has also adapted The Double into a feature film of the same name starring Jesse Eisenberg and Mia Wasikowska that was recently screened at TIFF 2013.

Adam Paolozza, Artistic Director of TheatreRUN and Tarragon's 2012-2013 Kareda Resident, further developed The Double under the mentorship of Tarragon's Artistic Director Richard Rose. He also assistant directed Rose in No Great Mischief on the Tarragon Mainstage last season. Paolozza is a graduate of École Internationale de Théâtre Jacques Lecoq and Ryerson Theatre School; he has studied Corporeal Mime with the Decroux company Intrepido in Paris. TheatreRUN is recognized as part of the next generation of exciting and physically innovative theatre creators and is co-creator (with Why Not Theatre and Theatre Smith Gilmour) of the internationally acclaimed hit show Spent, nominated for three Dora Mavor Moore Awards, and winning for Outstanding Performance in a Featured Role (both Paolozza and Ravi Jain). 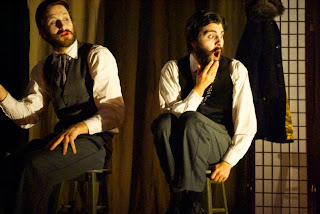 Viktor Lukawski is an actor, director and freelance instructor working in Canada, France and Poland. Like Paolozza, he trained at the École Internationale de Théâtre Jacques Lecoq in Paris, France. Lukawski recently toured nationally with Old Trout Puppet Workshops' hit Ignorance and has co-written and/or performed in several productions, including Shostakovich, or 3 Days in Red (TheatreRUN), SplasH20 (Edge of the Woods Theatre / Houppz Théâtre), and the site-specific Much Ado About Nothing at Spadina House (Single Thread Productions). He is also a company member of Wet Picnic in England. 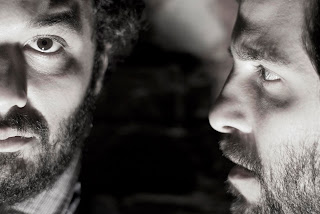 Tickets range from $21-$53 (including discounts for students, seniors and groups)
AND a Pay-What-You-Can on October 15 at 8pm
- $13 Rush Tickets available at the door for Fridays (on sale at 6pm) & Sundays (on sale at 1pm) starting Oct. 25.