Toronto – Arguably the greatest opera of the 20th century, Benjamin Britten’s Peter Grimes, comes to the Canadian Opera Company this fall for seven performances at the Four Seasons Centre for the Performing Arts on October 5, 8, 11, 17, 20, 23, 26, 2013. Recognized worldwide as the finest dramatic tenor before 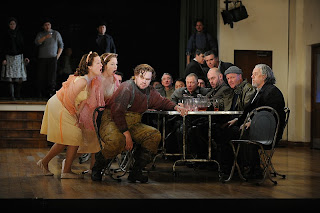 the public today, Canadian Ben Heppner returns to the COC in one of his favourite roles as the title character in Britten’s gripping opera about an alienated fisherman and the seaside village he struggles to inhabit. Peter Grimes is sung in English with English SURTITLES™.

COC Music Director Johannes Debus leads the COC Orchestra and Chorus through Britten’s evocative score with music that vividly personifies the world of its characters, from the activities of village life to the unrelenting power and loneliness of the sea. The COC’s production of Peter Grimes, presented in the centenary of the composer’s birth, marks Debus's conducting debut of Britten’s operatic masterpiece.

This production of Peter Grimes is by award-winning Australian director Neil Armfield, familiar to Toronto audiences for his past COC productions of Ariadne auf Naxos (2011), A Midsummer Night’s Dream (2009) and Billy Budd (2001). Armfield transports the world of Peter Grimes from the 1800s to post-World War II England and concentrates the action within a village hall, focusing our attention on Britten’s psychological revelations of small-town English life.

Armfield’s production gives special attention to one of the non-speaking characters in the opera, Dr. Crabbe. The real George Crabbe was an English poet, surgeon, and clergyman who created the story of Peter Grimes in The Borough, the poem from which the opera is adapted. Here, the Dr. Crabbe figure is a silent observer who, as Armfield has said in describing his vision, “has conceived these characters, this story, and sits back as their father and watches them perform it, watches as these creations of his mind come to life and act.” American mezzo-soprano Jill Grove, introduced to COC audiences as Amneris in 2010’s Aida, is renowned for her distinctive dramatic voice and artistry and returns to the COC as Auntie, the proprietor of the local tavern. Ensemble Studio members soprano Claire de Sévigné and mezzo-soprano Danielle MacMillan, who makes her COC mainstage debut, are Auntie’s nieces. 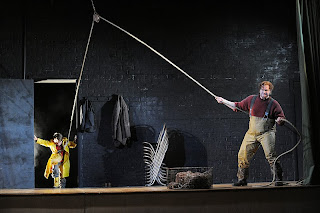 Rounding out the cast is acclaimed Canadian bass-baritone Tom Corbeil (who also appears as Colline in the COC’s La Bohème this fall) as the lawyer Swallow, highly sought-after American mezzo-soprano Nancy Maultsby in her COC debut as the meddlesome Mrs. Sedley, Ensemble Studio tenor Owen McCausland as Rev. Horace Adams and Canadian bass Robert Pomakov as Hobson. The non-speaking role of Dr. Crabbe is played by Canadian actor Thomas Hauff.

Denni Sayers, a frequent collaborator with Armfield who has worked with the COC on several past productions, returns as the revival director. Costumes for the production are by Tess Schofield whose designs reflect the life of hardship that would have been experienced in a rural seaside village during wartime. Ralph Myers has designed the sets, the framework of which is a village hall. Myers’ hall design is suggestive of a similar space in Aldeburgh, England, Britten’s home village on the coast and an additional source of inspiration for the composition of Peter Grimes. Lighting design by Damien Cooper further serves to suggest the opera’s isolated seaside setting.

Peter Grimes premiered on June 7, 1945, one month after World War II ended in Europe and marked the reopening of the Sadler's Wells Opera Company in London. Peter Grimes was an immediate success and established Britten as the pre-eminent British composer of his generation. Britten died on December 4, 1976, in Aldeburgh. He is one of the most performed 20th-century composers of opera from anywhere in the 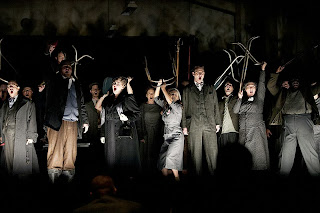 This production of Peter Grimes comes from Opera Australia, which co-produced the work with Houston Grand Opera and West Australian Opera.

TICKET INFORMATION
Single tickets for Peter Grimes are $12 – $365 (includes applicable taxes). Tickets are available online at coc.ca, by calling 416-363-8231, or in person at the Four Seasons Centre for the Performing Arts Box Office, located at 145 Queen St. W. See the website for other details.