Infinithéâtre Presents the Return of
Kafka’s Ape
Based on Franz Kafka’s short story, A Report to an Academy
Adapted from the original German and directed by Guy Sprung
Thursday, November 7 – Sunday November 24, 2013

“I deliberately don’t use the word ‘freedom’. ‘Freedom’ is a powerfully seductive word which your so-called civilized world uses very cleverly, very effectively, to entrap and occupy whole continents.” - Redpeter

MONTREAL - Infinithéâtre presents the remount of its hugely successful world premiere of Kafka’s Ape, Guy Sprung’s adaptation of Franz Kafka’s A Report to an Academy, from the original German. 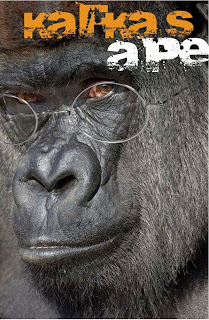 Kafka’s Ape runs from Nov. 7-24 at Bain St. Michel. This disturbing satire is a theatrical tour-de-force starring company favourite Howard Rosenstein as keynote speaker, the primate Mr. Redpeter. Born in 1883, Kafka is one of the most influential authors of the 20th century.

Sprung is thrilled with the response the play garnered during its original run, “During the last week of the February performances we were turning audiences away. We are bringing the show back to be able to offer it to schools, particularly CEGEPs and universities, as well as Montreal audiences who missed the opportunity to catch one of the most exciting productions of the city’s past theatre season.” Sprung is looking forward to revisiting the production, “Last season was the premiere of a first draft of the play and an initial exploration of the central character. This new rehearsal period will allow the company to polish the script, deepen the tragic ape to human internal journey and have the time to expand and define the onstage relationship between Redpeter and Mrs. Redpeter.”

Captured on the Gold Coast and imprisoned in a cage, Redpeter’s only escape route is to become a walking, talking, spitting, hard-drinking member of the Peace Industry, the entrepreneurial world of mercenary soldiers. In detailing the journey of his enforced evolution from Apehood to Humanhood, Mr. Redpeter is a living embodiment of the irony that perhaps now he is more animal than he ever was as an ape. Witness a human become an ape become a human before your very eyes... 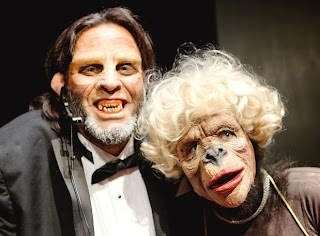 to mass murder and genocide.

Writer/director Guy Sprung has adapted Kafka’s story, originally a tale of the captured simian turned into a celebrated variety show act, and has Redpeter end up as a distinguished member of the ‘private security industry’, a euphemism that white-washes his reality as a mercenary soldier. Sprung is certain Kafka will not object to this contemporizing of his work, “Just as Redpeter, in the original, had to distort his animal nature to be accepted into humanhood, so in our version he has to distort his nature even more to be assimilated into one of the most heinous occupations that Homo sapiens has embraced on its evolutionary journey - the privatization of the killing and the subjugating of other human beings for profit.” Kafka’s central thesis, that other animals have a dignity and a respect for Mother Nature and their own species which Homo sapiens have lost, has been nudged into the 21st century. Sprung adds, “My father’s generation of Canadians who volunteered to fight in the Second World War must be rolling in their graves to see the military turned into a for-profit enterprise.”