A New Play by Bruce Norris
Directed by Anna D. Shapiro
Running Time: 2 hours and 10 minutes, including an intermission

NEW YORK CITY - DOMESTICATED, by Bruce Norris, the Pulitzer- and Tony-winning author of CLYBOURNE PARK, dives into the conflagration of gender, power, sexuality and politics that emerges in a private relationship after a public humiliation. In this prescient new play, Laurie Metcalf and Jeff Goldblum play Judy and Bill Pulver whose marriage is thrust into the public eye by scandal. As told by Norris, their story is wickedly funny, deeply serious and anything but predictable.

In addition to the Tony Award and the Pulitzer Prize for Drama, Bruce Norris won London's Olivier and Evening Standard Awards for CLYBOURNE PARK. His other works include A Parallelogram, The Unmentionables, The Pain and the Itch, We All Went Down To Amsterdam, Purple Heart, and The Infidel.

Anna D. Shapiro directed Bruce Norris's A Parallelogram, The Unmentionables, The Pain and the Itch, Purple Heart and The Infidel. On Broadway, she directed August: Osage County, (Tony Award) and most recently The Motherfucker with the Hat. 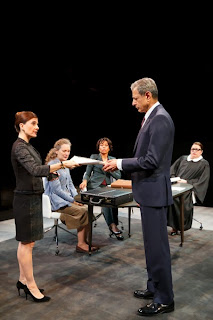 Laurie Metcalf has appeared on Broadway in The Other Place and November, receiving Tony nominations for both. Other recent stage credits include the Broadway revival of Brighton Beach Memoirs, and Long Day's Journey Into Night in the West End. She won three Emmy Awards playing Roseanne's sister, Jackie, on the long-running series.

Jeff Goldblum's Broadway credits include Seminar and The Pillowman (Outer Critics' Circle Award and Drama Critics' Award). Film credits include Adam Resurrected, Nashville, Jurassic Park, Independence Day, The Big Chill and The Fly. He was nominated for an Academy Award for the live-action short, Little Surprises.

Join us on Thursday, December 19 from 6-6:45pm for a Platform Series event with cast members Laurie Metcalf and Jeff Goldblum. The event is free and will take place in the Vivian Beaumont Lobby. Seating is limited and available on a first-come, first-served basis beginning a half hour before the talk. 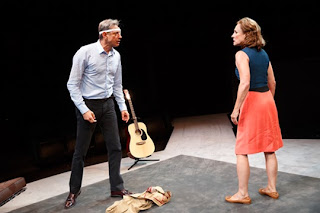 DOMESTICATED will be performed Tuesday through Saturday evenings at 8pm, with matinees Wednesday and Saturday at 2pm and Sunday at 3pm.
• Please note: there will be no performance on Tuesday, November 5.
• Tickets, priced from $75 to $85, are available at the Lincoln Center Theater box office, at telecharge.com or by visiting www.lct.org
• A limited number of tickets priced at $30 are available at every performance through LincTix, LCT’s program for 21 to 35 year olds. For information and to enroll, visit LincTix.org.
jeff goldblum laurie metcalf lincoln center theater off broadway opening night theater in new york city