TORONTO – The Ger Mandolin Orchestra (GMO), who perform in Toronto on November 7, is the brainchild of Israeli-American Avner Yonai. Avner’s search for his family roots in Poland led him to a 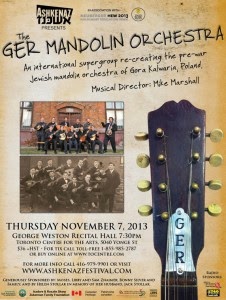 tattered photograph of his grandfather and two other relatives playing in a pre-WWII Jewish mandolin orchestra in the Polish town of Gora Kalwaria (Ger in Yiddish). The photograph inspired Yonai to create a contemporary version of this musical group, as a memorial project for his own family and the orchestra members, most of whom perished in the Holocaust.

“We have a lot of stone monuments, but this is a living monument...it brings something to life rather than honouring something that’s dead.” - Prof. Barbara Kirshenblatt-Gimblett (Columbia University, NYC), Program Director, Museum of the History of Polish Jews, Warsaw.

Under the direction of Grammy winner Mike Marshall, the new GMO resurrects a quintessential Jewish musical form. Mandolin clubs and orchestras were at one time ubiquitous in the shtetlakh (villages) of Jewish Eastern Europe and in North American immigrant communities. With authentic instrumentation and repertoire that includes Klezmer, Yiddish, Polish, Russian, Ukrainian, Italian, Czech and classical music, the GMO’s all-star lineup of international musicians achieves a rare synergy between history and virtuosic musical performance

Ashkenaz is pleased to present this very special concert as part of Holocaust Education Week, and will partner with the Yellow Rose Project to bring hundreds of Holocaust Survivors to the concert for free. Ashkenaz will also provide free tickets to students and youth to share this rich musical experience with the next generation.

The 11 member GMO was founded in 2011 as a commission project of the Jewish Music Festival in Berkeley, California. Six months after its premiere performance, the group was invited to Poland to perform in the town of Gora Kalwaria to a packed room of over 500 residents, including the only two remaining Jewish community members.

As a result of the youth workshops conducted by the GMO on that trip, a number of Polish youth mandolin orchestras now perform arrangements of Jewish music.  The GMO is led by renowned multi- 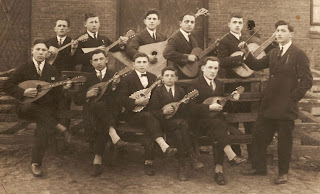 instrumentalist Mike Marshall, a multiple Grammy nominee and winner known for his work over the last 35 years with such luminaries as Bela Fleck, David Grisman, Edgar Meyer, and Stephane Grappelli. Marshall is an adventurous innovator whose stylistic mastery ranges from bluegrass and classical to Brazilian folk and jazz.

Marshall is joined in the GMO by an all-star cast of mandolinists from Canada, the US, Europe and Israel. From the classical mandolin world comes San Diego’s Chris Acquavella, and San Francisco’s Dana Rath and Adam Roskiewicz, one half of the Modern Mandolin Quartet, whose most recent album Americana received three Grammy nominations in 2012. The group’s resident experts in Jewish and Klezmer music are New York City’s Jeff Warschauer and Toronto’s Eric Stein, leader of the award- 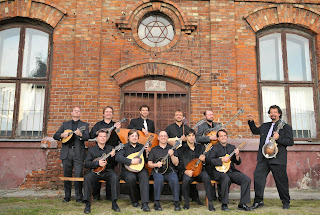 winning group Beyond the Pale and Artistic Director of the Ashkenaz Foundation. From Portland, Oregon come Brian Oberlin and Tim Connell, mandolinists esteemed for their expertise in bluegrass, jazz and Brazilian music. Adding to the international flavour of the group is Prague’s Radim Zenkl, an astounding virtuoso whose music bridges the worlds of bluegrass, classical and east European folk. The orchestra is completed by two new additions, Chicago-based jazz-mandolin master Don Stiernberg, a protégé of the late great Jethro Burns, and  Israel’s Tom Cohen, a remarkably accomplished young mandolinist, composer/arranger and conductor who specializes in Balkan, Roma, North African and Andalusian music.