NEW YORK CITY  - The African Diaspora International Film Festival is in full swing in New York City and specially for music lovers, this Friday's Centerpiece Screening looks at the African roots of music we automatically associate with South America. 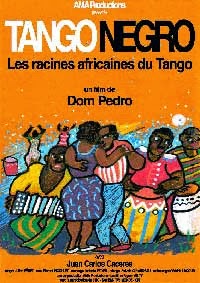 TANGO NEGRO, AFRICAN ROOTS OF TANGO
US Premiere
Directed by Dom Pedro, 2013, 93 min., France, Documentary , French/Spanish/ English subt.
Tango Negro, African  Roots of Tango by Angolan filmmaker Dom Pedro explores the expression of Tango's Africanness and the contribution of African cultures in the creation of the tango. Tango was a reflection of the social life of the slaves that were taken to South America - including Argentina and Uruguay - mostly from central Africa, particularly from the former Kongo Kingdom. Director Dom Pedro reveals the depth of the footprints of the African music on the tango, through this rich movie combining musical performances and interviews from many tango fans and historians in Latin America and Europe, including the renowned Argentinean pianist Juan Carlos Caceres.

CANDOMBE
Directed by Rafael Deugenio, 1993, 16 min., Uruguay, Docu-drama, Spanish/ English subt.
More than two hundred years ago, there was an influx into Uruguay of slaves from Africa who, after being freed, continued to make up the poorest and most marginalized strata in society. Fernado Nunez, a black man, a musician, and a maker of drums, sees himself as the heir to "Candombe", an important social and cultural legacy from his slave forefathers. The official history and culture of Uruguay, on the other hand, which has never acknowledged this contribution to the degree which it deserves, continues to marginalize expressions of black culture. Fernando Nunez and his friends from the Barrio Sur back street quarter of Montevideo have decided to fight to keep these important cultural roots alive in the consciousness of the Uruguayan people.