NEW YORK CITY - After celebrated engagements downtown and in Washington D.C., BEDLAM brings its critically-acclaimed productions of SAINT JOAN and HAMLET back to New York! 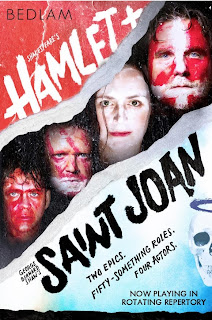 Following the edict “the play’s the thing,” this innovative theater company distills two of the stage’s greatest classics down to their simplest form—placing the focus on the actors’ performance and the authors’ words—and breaks down the walls between the performers and the audience.

The result is a powerful and immersive piece of theater that allows the viewer to experience these masterpieces like never before. The Wall Street Journal named BEDLAM’s production of SAINT JOAN the “Best Revival of 2012” and said their HAMLET is "an experience so intense and concentrated that you'll feel as though you were part of the action.” These thrilling productions will be performed in repertory for 12 weeks only. You cannot miss BEDLAM’s passionate, virtuosic and pulse-quickening performances in SAINT JOAN and HAMLET.

Committed to the immediacy of the relationship between the actor and the audience BEDLAM creates theatre in a flexible, raw space and is interested in contemporary reappraisals of the classics, new writing and small-scale musical theatre.

About Bedlam Theatre
The theatre we make always includes the audience. Storytelling is paramount to us. We believe that innovative use of space can collapse aesthetic distance and bring the audience into direct contact with the dangers and delicacies of life––inciting laughter and chaos, exciting thinking and recreating the thrill of lived experience.