TORONTO, ON – Put the beat in your blades when Harbourfront Centre’s wildly popular DJ Skate Nights series returns for another season. Twelve consecutive Saturday nights from Dec. 14 to March 1

With themed nights ranging from rare groove to top 40 hits, there is truly something for everyone. So get ready to lace up and get down with Toronto’s finest spin masters. 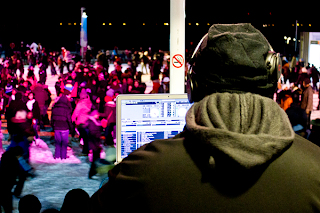