Do not be afraid of New Music, electronic music or the fact that this CD contains only two long tracks. Neil Rolnick's latest work is a seamless marriage of musical styles, of organic melody and edgy live digital processing. The release includes two 30-minute pieces for big ensemble, soloist and computer. 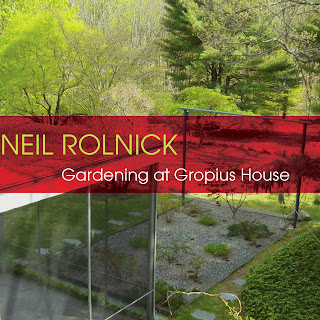 From the composer himself:

Gardening At Gropius House is based on interactions I had with the famous modernist achitect Walter Gropius when I worked at his gardener in college. It explores the tension between 20th century modernism and music based on melodies and grooves. And the groove definitely emerges triumphant. The second piece, Anosmia, explores the experience of living without the sense of smell. And in the end, it turns our to be a love song. Because when you can't smell yourself, who can you depend on? "Dear lover, sweetheart, be my nose ..."

The players on both pieces are spectacular. Gardening At Gropius House features the unstoppable Todd Reynolds on violin, with members of Alarm Will Sound, conducted by Alan Pierson. Anosmia is performed by the San Francisco Conservatory's New Music Ensemble, conducted by Nicole Paiement, with baritone Daniel Cilli.

effortlessly. The music is rhythmic and has a delightfully appealing exuberance. The first - and title - piece has a nice sense of drama and flair. The second track - Anosmia - has a playful nature and highlights the vocals. It's described as a monodrama for three singers (Andy Osmia and the 2 Scents), computer and ensemble and features baritone Daniel Cilli and the New Music Ensemble of the San Francisco Conservatory (conducted by Nicole Paiement). The piece draws on a variety of Western musical idioms - including doo-wop - that become an intriguingly whimsical look at the nose (and its absence, lol).

• For more of Neil's videos, check out his youtube page