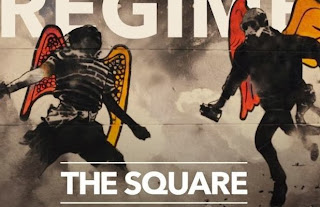 limited engagement of the award-winning documentary The Square, Friday, January 17 2014 at the Bloor Hot Docs cinema.

The Square follows a diverse group of Egyptian activists, armed only with cameras and the power of social media, as they risk their lives to build a liberated society.  Directed by Egyptian-American Jehane Noujaim, The Square follows these activists not only through the ouster of former President Hosni Mubarak in 2011, but also through the turbulent years that followed.  Defiant, courageous, and inspiring, The Square has been called “a remarkable portrait of Egypt’s false dawns, and worthy of its Oscar buzz” by Time Magazine.

The Square was first released as an unfinished cut at Sundance in 2013, and was awarded the Audience Award for World Cinema Documentary.  However, even as the filmmakers were accepting their awards, the activists featured in the film were returning to the streets of Cairo, as the country’s first democratically elected president began granting himself extraordinary powers. It was clear that the fight was not over, and the filmmakers returned to Cairo to capture what would become the second part of this developing story.

Following the film, AITO will host a panel discussion focusing on the important issues raised in the film.