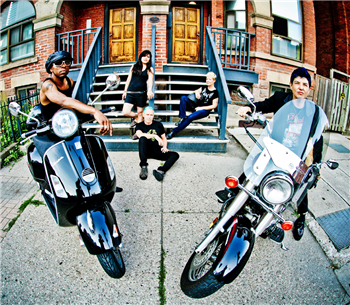 There’s nothing random or orderly about this band Random Order. Sometimes described as “rock ‘n’ reggae” the group is one of Toronto’s best, longstanding underground treasures. And now with their third album plus a stunning video of the title track, the band is set to achieve new heights, exploring the dark links between pleasure and pain.

Lead vocalist/guitarist and founding member Lynn Phillips, is the driving force behind Random Order. The vocal style ranges from playful rap, to soulful reggae, to blow-you-away punk/funk and rawk – Lynn even barks and growls at times when the edginess ramps up in live performances. The meat and potatoes of this group are Lynn, who plays lead guitar with a definite Jimi Hendrix influence, and trombonist John Jowett, who adds memorable flavour, flourish and fun to the mix. Adding the groove are drummer Caterina Marchese, percussionist Anita Graciano and bassist Bryant Didier.

The new CD BLACK LIPSTICK KISS, features “Zombie-fied zigzagging pulp fiction tango-rock reggae, ”straddling the edge of thriller ska and a hint of ‘50s candy pop. Having drawn comparisons to bands such as The Au Pairs, The Slits, and The Clash in previous years, Random Order’s new music now reflects more of the Clash sound, circa London Calling. The title track “Black Lipstick Kiss” was spawned from lead singer Lynn Phillip’s passion for sexy, dangerous, spy soundtracks and movies like Dawn of the Dead and anything by Quentin Tarantino. The CD highlights high-energy tunes with complex 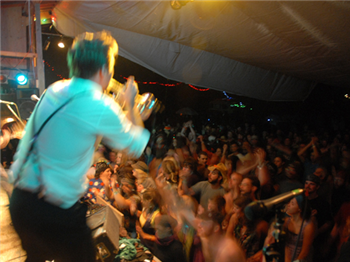 arrangements, as in the epic “Black Heart,” the horn-driven surf rock instrumental “Do It In Quattro,” and also includes intricately layered vocal harmonies such as those in the ska-drenched “Spoiled.”

Random Order has toured all over the world, playing in Tokyo, Guatemala, Milwaukee, Holland, and Belgium. Their music has been heard on radio stations all over Canada, in Ireland and Berlin, and they played Milwaukee Pridefest where they opened for Salt-n-Pepa.

They are fast becoming known as a dynamic supergroup who pack floors quickly with politics you can dance to. But however they’ve been described, Random Order's sound is certainly unique.