Cedric was born and raised in Holly Springs, Mississippi. At the young age of 13, he began touring around the world playing drums with his grandfather, North Mississippi blues legend R.L. Burnside also known as "Big Daddy". In late 2006, Cedric & Lightin' Malcolm teamed up and toured as "The Juke Joint 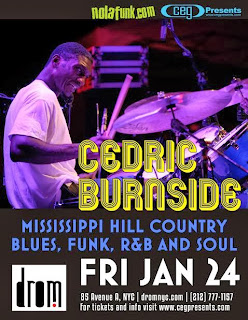 Duo" which produced the award winning record, ‘Two Man Wrecking Crew'. In 2010, Cedric collaborated with his younger brother, Cody Burnside, and his uncle, Garry Burnside, to create The Cedric Burnside Project. They created a new genre of music by infusing Mississippi Hill Country Blues, Funk, R&B and Soul that will keep your foot stomping all night long! Following the passing of his brother, Cody, Cedric keeps the flame burning, touring with Trenton Ayers.