Described as “mesmerizing from start to finish,” by The Hollywood Reporter, Big Bad Wolves involves a series of brutal murders that put the lives of three men on a collision course: the father of the latest victim, a vigilante police detective and the main suspect in the killings – a religious studies teacher arrested and released by a police blunder. It follows Israeli filmmakers Aharon Keshales and Navot Papushado’s first feature, Rabies, which caused a sensation at its 2010 debut at the Tribeca Film Festival as Israel’s first horror film. Big Bad Wolves asks the question, “does being the victim give you the legitimate right to turn into a bloodthirsty vigilante?”

Writer/directors Keshales and Papushado took their inspiration from contemporary society, explaining that, “existential anxiety serves as Israel's foundation and attempts to define and reinforce the legitimacy of the state: a fear of terrorist activities, primarily kidnappings, unremitting feelings of being persecuted, inherent intolerance and macho behavior topped with a historical craving for vengeance create an ideal breeding ground for extreme actions and subsequent reactions.” Big Bad Wolves is their attempt to address those issues. 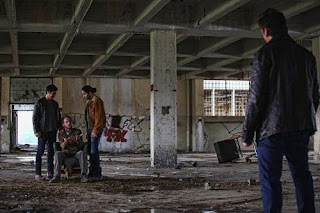 “The rapturous reception the film received at the Fantasia Festival earlier this year has been repeated at screenings across the world and we’re excited to bring it to theatres in Canada,” stated VSC President Jonathan Gross, “Aharon and Navot have made a thought-provoking film that will have audiences talking.”

The film will be released on VOD, iTunes, DVD and Blu-ray later in 2014.