TORONTO – After coming out swinging with their debut album in 2011, Toronto-based collective THE HEAVYWEIGHTS BRASS BAND now packs a one-two punch of crossover appeal and respect from music’s elite with the release of their sophomore album BRASSTRONOMICAL. Their many fans will join them to celebrate the album release at Lula Lounge, 1585 Dundas St. West on Thursday, March 6th. Doors 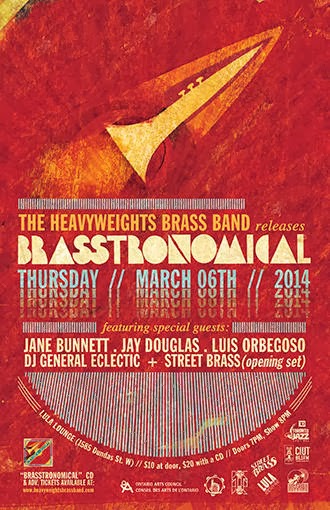 This country’s greatest purveryors of feel-good horn music burst onto the Canadian jazz scene with their energetic brass band covers of contemporary pop hits. Now with Brasstronomical, the Heavyweights are offering a unique sound with emphasis on their original compositions. They delve deeper and more eclectically into each musical direction implied on the first album. Brasstronomical reveals the band’s remarkable progress over the past three years; their music is stronger, bolder, ballsier, funkier and more mature than ever before. Similarly, the sound of the new album is fuller, richer, with more elaborate production while retaining the players’ raw burning passion.

While the Heavyweights remain inspired by the New Orleans tradition – after all, they cover the dirty, gritty “St. James Infirmary Blues” here – they are a product of their local Toronto environment and skillfully reference the incredibly diverse, multicultural music scene the city is known for. The band lithely moves between funky modern originals like the title track and “Hypnosis” to hot-burning material like “I think I’m Going Crazy”; from the neo soul of “Telephone” (written by Erica Badu and two members of hip-hop royalty, The Roots) to a wild cover of the RUSH prog-rock anthem YYZ (a nod to their hometown Toronto); and from an especially sweet version of R. Kelly’s “I Believe I Can Fly” – which the members of the band can recall from their childhoods – to the pulsating Afro-Cuban jazz of “Misterioso.”

In fact, “Misterioso” offers a perfect example of the sort of respect that the band has earned from some of the world’s most exceptional musicians. The song features iconic national treasure and frequent collaborator Jane Bunnett, playing off of the propulsive rhythmic drive of legendary percussion master Giovanni Hidalgo – who’s performed and recorded with the likes of Dizzy Gillespie and Paul Simon, among countless others. Hidalgo joins the band live at Koerner Hall on the explosive, incendiary album finale “Float.” Jamaican-born, Toronto-based, JUNO nominated R&B singer Jay Douglas – something of a mentor to the band members – soulfully sings on the traditional New Orleans-style “Booze Hounds.” In further distinctive acknowledgements, the band received props from The Roots on twitter after opening for them, and have 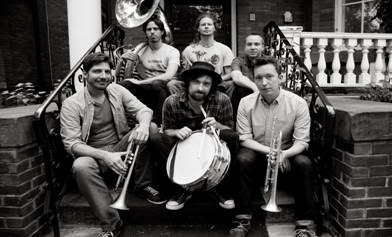 been championed by influential British DJ and tastemaker Gilles Peterson.

The band is composed of trombonist Christopher Butcher, Rob Teehan on sousaphone, Paul Metcalfe on saxophones, Lowell Whitty on drums, Jon Challoner on trumpet and recent addition John Pittman also on trumpet. Of particular note, is Metcalfe’s solo on YYZ where he mimics a wailing guitar, but every one of the players has incredibly inspired moments that leave their indelible mark on Brasstronomical.

Opening the event will be Street Brass, which is a community-based horn ensemble that plays brass music from across the Americas. The group is led by Christopher Butcher in collaboration with Uma Nota Culture. Special guests for the release concert include Jane Bunnett, Jay Douglas, Luis Orbegoso and one of Toronto’s finest DJs, DJ General Eclectic (who also did the album design.)

Brasstronomical is the first album to be released on the newly formed Lulaworld Records operated by Lula Lounge, which is Toronto's home to great live salsa, jazz, Brazilian, African and world music.

Doors 7pm/Show 8pm
Dinner reservations
• As an incentive to purchasing your tickets online we are giving away three tracks recorded at the Brasstronomical sessions that aren't included on the CD. They will be emailed directly to you.
• As a second incentive every package other then "General Admission" includes a direct download of the entire album as well. Meaning you don't need to wait until the March 6th to get it, you get Brasstronomical emailed to you now. The physical copy of the CD will be picked up at the door.