“Don’t be afraid. I left my hate at the foot of a barbed-wire fence.” – Aeneas

Montreal- Talisman Theatre is honoured to present the Canadian English-language premiere of this important story, The Aeneid. Written by Québecois playwright Olivier Kemeid and translated by Judith 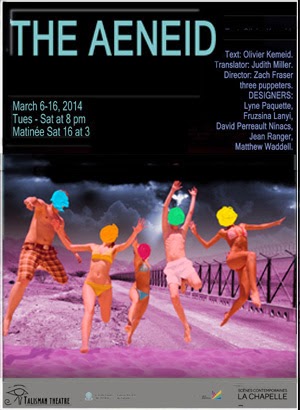 Miller, The Aeneid will be performed at Theatre La Chapelle from March 6-15. Directed by Zach Fraser, the cast features Marcelo Arroyo, Deena Aziz and Chimwemwe Miller as the gifted actor/puppeteers playing over 20 roles in this dynamic blend of epic legend and contemporary reality.

Sometimes flight is necessary, leaving everything behind in pursuit of a new place to call home. Rich with scenes of moving drama and biting humour, Kemeid's version of this classic tale migrates the search for a homeland into the modern world of a middle-eastern revolution. In this powerful and disturbing new adaptation, we encounter tourist resorts, refugee camps and immigration officers, but the mythic magic of Virgil’s original epic remains a visit to Hades and encounters with underworld spirits. The Aeneid’s message is as relevant today as when it was originally written: the importance of family, friends and a place called ‘home’.

This is the first time Kemeid’s play will be staged using puppetry. Director Zach Fraser is the mastermind designer/builder behind each of the 22 characters; Fruzsina Lanyi designs the puppet’s colourful costumes. The Aeneid is timeless and universal as it examines the voyage of a modern-day refugee. Not unlike War Horse in its innovative use of dramatic puppetry, yet playful in its caricatures, this is no Sesame Street. This is a unique evening at the theatre, combining beautiful language with hand-crafted puppets. The story’s heroes come to life as characters effortlessly move from one place and time to another - with just a flip of a few set pieces they’re on a boat, in an office, in Hades or at a resort. Audiences are kept engaged in the full story as it progresses.

Fraser has wanted to examine the immigrant experience and the idea of ‘the other’ for several years, “In 2007, the debate around ‘reasonable accommodations’ intrigued me. Now in 2014, we are still in the thick of it.” He continues, “This proposed Charter of Quebec Values highlights a very real need for us to better understand ourselves and to learn more about the world at large. Fear of others is often linked to a lack of understanding about them. This play helps put things in perspective.” Kemeid’s adaptation brings to the surface all the absurdity, the tragedy and the heroism tied to the refugee experience. The journey Aeneas and his family go through is a reality for millions around the world. For Fraser, everyone on this planet is entitled to a place to call home, “I never understand how governments can say, ‘We have no place for you here.’ It baffles me that we so easily put the concept of economy above human needs.” Fraser hopes The Aeneid is a reminder for people to ask neighbours about their journeys and life experiences, “Not only would this decrease intolerance within our communities, but it might also fill us with wonderment about the strength and will of the human race.”

Lyne Paquette, Talisman Theatre’s Artistic Director and co-set designer with Fruzsina Lanyi, was drawn to the high contrast of the play which is evidenced in her design, “We are focusing on the juxtapositions inherent in the text- old/new, contemporary/mythical, absurd/tragic, with post-disaster, repurposed pieces shifting throughout. In The Aeneid we discover a collapsing, transient world, always off-kilter in a makeshift state.” 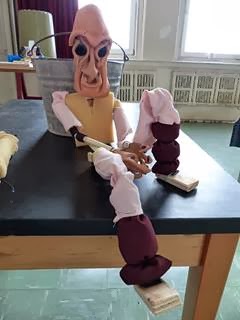 “I’m not a humanitarian organization; we don’t get funds to give food to refugees. You’re refugees, that’s right isn’t it, or beggars? I mean, you weren’t poor before you were thrown out, right?”- The Hotel Keeper
The Aeneid (9 shows only)
Talisman Theatre
Playing at Theatre La Chapelle, 3700 rue St. Dominique
March 6-15, 2014
Tuesday to Saturday, 8:00 pm. Matinee: Sat., March 15 at 3:00 pm
Tickets: 29$ regular, 25$ students 514 843-7738 or purchase online: La Chapelle box office
Talisman Theatre’s mission is to produce English-language premières of contemporary Québécois works, bringing the visceral intensity of Québécois theatrical practice to non-Francophones.