With funky keyboards and saxophone added to the mix, Funktapuss keeps the crowds smiling and feet on the dance floor.

Make no mistake, Funktapuss has got chops.  United States Naval veteran Brian “Beek” Vanderbeek is an accomplished musician.  Mentored by bass legend Victor Wooten, Beek has spent time as a hired gun, backing up artists such as Jennifer Johns and Medusa, and recording with Satellite Grey.  Multi-instrumentalist Ryan Tivey pulls double duty, playing both keyboards and saxophone.  Tivey majored in music education at Berklee College of Music where he studied under Fred Lipsius, a Grammy award-winning artist known best as a member of the band Blood, Sweat, and Tears.  Tivey also had the opportunity to learn from Bruce Katz and has had the pleasure of jamming with Jerry Portnoy of the Eric Clapton Band, Richard Dreyfus, David Garabaldi, Susan Tedechi, and Derek Trucks.

Building on a relationship with Beek and Tivey that dates back to their high school years, drummer Chris Santos helped form Funktapuss after earning a musical performance degree on full scholarship to Berklee College of Music.  Santos, Beek, and Tivey have also toured together as members of the Zach Deputy Band, playing high profile venues and festivals throughout the east coast.  Self taught guitarist Tom Davis 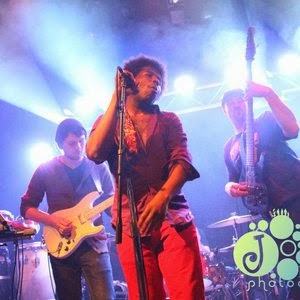 draws from a wide spectrum of influences that run the gamut from Led Zeppelin, Stevie Ray Vaughn, to Jack White.  The end result is fiery riffing that rears its mighty head, adding to Funktapuss’s “wow” factor.

Accomplished vocalist Latez Crawley rounds out the band.  Coming up in both gospel and school choir, Crawley competed at the all-district and all-state level and performed at Walt Disney World. Crawley earned a degree in theater music from American Musical and Dramatic Academy in New York City.  He went on to play major roles in various musical productions before joining Funktapuss in 2009.

From concert halls, to the bar, to the club, Funktapuss is a touring machine that brings the party wherever they go.  They can rock a huge late-night festival crowd, or have heads bobbing in the jazz club.  If you ever wondered what it would sound like if Stevie Wonder and Maceo Parker got together, you’re going to want to check out Funktapuss.