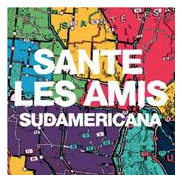 With a catchy fusion of rock and electronica, 'Sudamericana' is the debut album from acclaimed indie band Santé Les Amis, which will be released May 27th by Nacional Records.

Santé Les Amis has toured with Franz Ferdinand, Foals and Calle 13, making the band a fan favorite among indie rock fans. With tracks in English and Spanish, 'Sudamericana' has won praise from Indie Shuffle and Remezcla, who celebrated their “funky, dance-floor-igniting goodness.”

Watch the Video For The First Single “Brasil”: