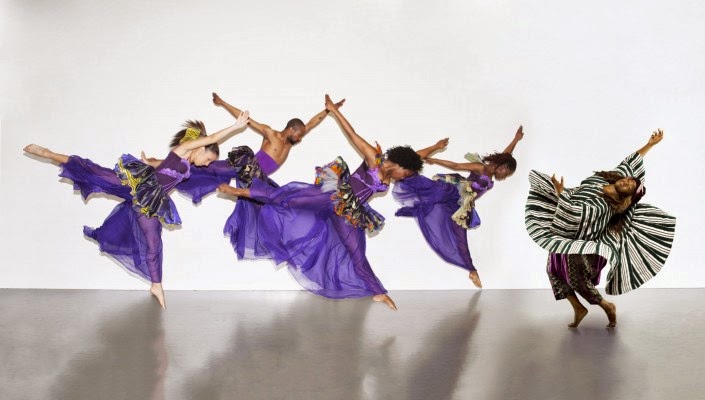 Azaguno founder/dance director and choreographer, Zelma Badu-Younge, and founder/executive and music director, Paschal Yao Younge, bring to stage the world premiere of Africa Meets Asia. The performance will explore the fusion, juxtaposition and similarities of African and Asian dance and music. Azaguno, a multi-ethnic international touring group based in Athens, Ohio, focuses on performance of traditional and contemporary African dance and music. Through intercultural works, Azaguno brings to the stage a unique African theatrical experience.

KasheDance is hailed as embodying artistic diversity in technique, form and presentation. This company echoes in a new genealogy of Afro-contemporary dance steeped in modern dance, ballet and rooted in dances of the diaspora. Celebrating its fifth anniversary, KasheDance will perform Ke-ashe (Interludes within), a work that unleashes a person’s restraint to freedom in the internal and external interludes of life. Recalcitrare (2011) is about dance at the crossroads; where definition is insignificant to technical execution, form, content, choreographic exploration and personal artistic expression. Finally, 5…, a journey of three pieces choreographed since KasheDance’s inception where the final sections will dance the story of migratory bodies in motion; unrelenting artistic inquiry in form, place and time.

Zelma Badu-Younge – Founder/Dance Director & Choreographer of Azaguno
Zelma Badu-Younge, one of the most charismatic cultural fusion artists, captivates her audience as she steps on stage. This mesmerizing performer is considered one of the most electrifying choreographers in Canada, Ghana and the United States; with her high-energy synthesis of West African traditions combined with other world dance forms. A multi-award winning choreographer, Zelma has received

the Canada Council for the Arts, Laidlaw Foundation, and Chalmers Awards; the Ontario, North York, and Toronto Art Council awards, a nomination for Outstanding Choreography by the Dora Mavor Moore Awards, the Ohio Arts Council Individual Excellence Award for choreography, and the NAACP Image Award for Excellence. Commissioned twice by the National Dance Company of Ghana, she has instructed, lectured, performed, given workshops or choreographed throughout the United States, Canada, Australia, Mexico, Taiwan, South Korea, China, Italy, Germany and Ghana. Recently, Azaguno performed Zelma’s work in a production with the Hong Kong Chinese Orchestra (China.) Zelma Badu-Younge is the choreographer/dance director of Azaguno.

Paschal Yao Younge – Founder/Executive and Music Director of Azaguno
The sights and sounds of Africa fill the air when Paschal Yao Younge, a multi-talented musician, composer, author and performer presents world musical arts internationally, focusing on types from Africa and the African diaspora. Younge’s works include several vocal and instrumental works for orchestras, brass bands and choirs. The Hong Kong Chinese Orchestra performed his recent work, “Africa Meets Asia” arranged for Chinese and African instruments by Simon Kong Su Leong in November of 2011. As a specialist and advocate of intercultural and multicultural musical arts, Younge has presented internationally in over 30 states/provinces in the US/Canada and 15 countries internationally including, France, Spain, England, South Korea, China-Taiwan, Hong Kong, Italy, Togo, Ghana, etc. Younge’s recent book and DVD publications in 2011 include Music and Dance Traditions of Ghana: History, Performance and Teaching and a 10-DVD set, Dance-Drumming Ceremonies of Ghana. Younge is the executive/music director of Azaguno.

Kevin Ormsby – Choreographer/Artistic Director of KasheDance
Kevin A. Ormsby, artistic director of KasheDance, works independently as an arts marketing consultant, dance teacher, choreographer and movement coach. He started his training at the Edna Manley College of the Visual and Performing Arts in the dance and drama departments and continued his career with Ballet Creole, Ron A. Taylor Dance among others in Toronto and has performed in the works of Ron K. Brown, Mark Morris, Bill T. Jones, Gesel Mason and Allison Cummings. A company member with Garth Fagan Dance (New York) for six years, Kevin further developed his artistry and passion for dance. He is the dance animateur at the Living Arts Centre, a consultant for Cultural Pluralism in the Arts Movement Ontario (CPAMO), and a member of Wind in the Leaves Collective. A passionate advocate of dance education, writing and outreach, he has presented papers and sat on panels in the US, Caribbean, Canada and has been published in Pluralism in the Arts in Canada: A Change is Gonna Come (2012). He is on the Toronto Arts Council’s Dance Committee and also lends his efforts as chair of the Dance Companies’ Standing Council at Canadian Dance Assembly.