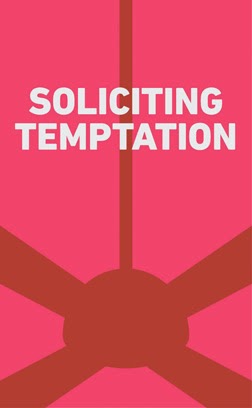 In a sweaty and sticky hotel room in an unnamed developing country, a Western man and a young woman meet for sex. Somewhere between the reality and the fantasy, the sex becomes talk and the talk becomes dangerous. Nothing is off limits in this battle of morality, economics and desire.

Says Shields, "I initially started writing this play because I was incensed at the rise in child sex tourism in developing countries. As I began to write, I realized that what I wanted to talk about was the power dynamics between young and old, rich and poor, male and female. Soliciting Temptation is about child sex tourism, but it is also a play about entrapment and desperate longing, about sexual suppression and sexual awakening, about the desire to expose and be exposed."

Director Andrea Donaldson, who has collaborated with Shields previously on such Groundwater Productions as Montparnesse and The Unfortunate Misadventures of Masha Galinski, says, "We count on playwrights to write the unspeakable, and for actors to give those words life - to be us at our best and to be us at our worst. Erin's two characters are ultimately each other's perfect match - and there is nothing more attractive than a couple who are worthy opponents. At the end of 60 minutes of real-time, they face themselves in ways that surprise them and us. I am drawn to this play because it grapples with our most essential human questions in an unexpected way."

Derek Boyes makes his Tarragon debut. A resident artist at Soulpepper Theatre, currently in his 11th season there, his numerous credits recently include The Norman Conquests and The Crucible with 12 Angry Men upcoming. An early claim to fame was his appearance in the world premiere of Ann-Marie MacDonald's Goodnight Desdemona (Good Morning Juliet), produced by Nightwood Theatre. He is also an associate artist with Toronto Masque Theatre.

Miriam Fernandes also makes her Tarragon debut. She has been seen in Hamlet for Shakespeare in Action, The Biographer for Tango Co. at Videofag, The Bundle during Sheep No Wool Theatre Company's Edward Bond Festival in 2012 and she is currently an artist-in-residence at Theatre Passe Muraille. In 2011, Fernandes co-founded The Pomegranate Project, an arts education initiative that connects students in Toronto to students in Mumbai, India through dance, theatre and filmmaking. She is the recipient of the inaugural Independent Theatre Creators International Training Scholarship, a partnership between Theatre Ontario and Why Not Theatre.

Set and costume design is by Ken MacKenzie, lighting design by Kimberly Purtell, and sound design by Thomas Ryder Payne. The stage manager is Laura Baxter.