• Check out the party & the CD here

This June, Karikatura will release its debut full-length album, Eyes Wide, recorded to analog tape at Mighty Toad Studios and mixed at Strangeweather Studios by creative luminary Daniel Schlett (Bob Dylan,Yeasayer, Rita Indiana). The music on the album is as diverse as the backgrounds and life-experiences of the band-members; each member contributed songs to the album, expressing his personal vision, and the band shaped the music collectively. They write songs the way a storyteller 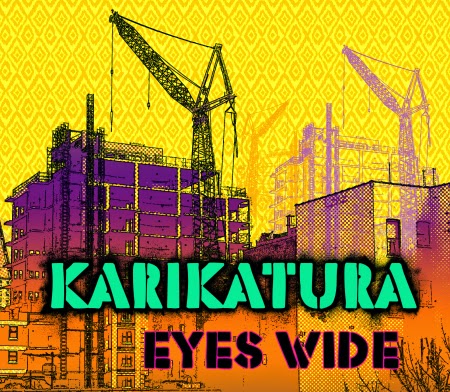 The album will come out on Ropeadope Records; Karikatura is excited to join the Ropeadope family, which boasts recent Grammy winners Snarky Puppy and a magnificent lineage, including The Philadelphia Experiment, Antibalas, Spanish Harlem Orchestra and many more amazing artists.

Karikatura makes life-affirming, body-shaking music that moves people around the world. While the band has toured everywhere from Japan to Brazil, New York City is home. With bright horns, socially conscious lyrics and booty-bouncing beats, Karikatura delivers real songs that transcend style and genre.  An organic synthesis of all the music heard blasting out of car windows and shops onto the streets of NYC, Karikatura lives where cumbia meets hip-hop, reggae meets klezmer and indie-rock meets afrobeat. Neither purist nor revivalist, this is music of the present, for the future.   The band has released two EPs and has successfully done DIY tours in Europe, Asia and South America.

Born on the road, Karikatura hasn’t stopped moving since. The band was conceived in South India in 2009 by Ukrainian-born, Brooklyn-bred recovering metal guitarist, Dima Kay, at the end of a life-changing journey across three continents. He returned to his adopted hometown of NYC to make the group a reality, joining forces with like-minded musicians: soulful singer Ryan Acquaotta, bassist Eric Legaspi, woodwinds maestro Joe Wilson, drummer Morgan Greenstreet, and brass-blaster Ric Becker. They hit the road, traveling from Kyoto to Berlin, via Bratislava and New Orleans, to spread the joy of music that brings people together. They are equally at home performing at a packed festival 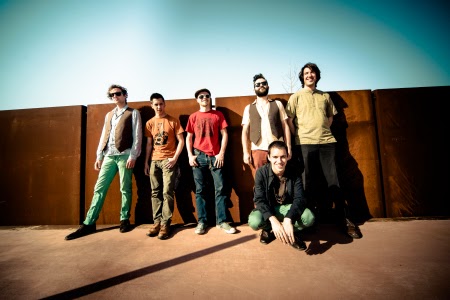 in Belgium, a Manhattan jazz bistro, a Czech punk club or the subways of Sao Paolo.

They were also selected for the Music Under New York Program (MUNY), one of only 18 new acts chosen by the MTA out of 300 applicants for permits to perform in the subways of NYC. After just a few months with MUNY, Karikatura was invited to participate in the Red Bull Sounderground Festival in Sao Paulo, alongside other popular street music performers from around the world. They made a major impact on Brazilian audiences, instantly winning fans and building bonds for the future.

2014 has already brought Karikatura to new places, with a three-week tour down to Austin, Texas for SXSW, including shows throughout the Northeast, Midwest, and the Southeast of the US. The band made new fans, new friends and lots of music along the way.

Wherever Karikatura goes, they move people with honest songs, strong rhythms and creative horns. Karikatura brings the world to New York and New York to the world, capturing the present moment, with eyes and ears wide open.