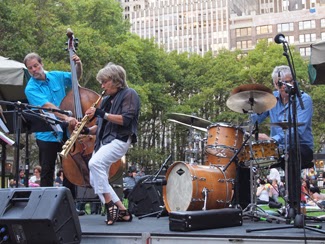 The series kicks off with performances by the all-star groups World Time Zone and SYBARITE5. World Time Zone plays a mix of straight-ahead jazz with a cool bluster and far-reaching curiosity, influenced by soul, funk, R&B, and folk. The concert features Michael Blake’s commissioned work Contrasts In Individualism, an homage to the legacies of saxophonists Coleman Hawkins and Lester Young. 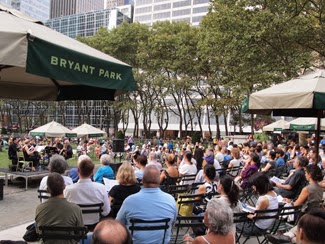 The award-winning string ensemble SYBARITE5, which has caught the attention of the music world with its dynamic performances and range of influences, presents the commissioned work Revolve by composer Andy Akiho.

New Music in Bryant Park continues each Friday, 6:00-8:30pm, through August 8. We’ve arranged for an audience in the round. The stage is setup on the gravel facing the steps to the Upper Terrace, and chairs are placed on the Upper Terrace, the sides of the stage, and the lawn.
bryant park nyc free music in new york city jazz in new york city new music outdoor concert in nyc