• Get the new single

Well that's what art is, innit? Is you being free of all the world's heaviness.

Slagg II, the latest single release by 1700 Monkey Ninjas (1700MN) opens with a sample of British comedian Karl Pilkington intoning one of his more notable observations. Quirky, evocative, the message is entirely in keeping with the ethos of both the piece and the 1700MN body of work. 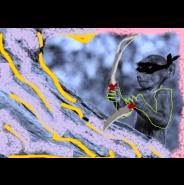 1700MN’s output since mid-2012 has been prolific and has consisted of self-produced indie audio releases available via the usual routes on iTunes and Amazon.com along with a series of some 40 videos that he’s released via his Youtube channel.  The videos feature his music paired with one of his digital art pieces. Like his music, the digital designs use a variety of eye popping techniques and colours in an abstract, post-modern fashion.

If the earliest waves of electronic artists helped to explore and establish the range of sounds available, subsequent waves are able to play with a vast repertoire of noise in creating their works. 1700MN’s work falls fairly neatly into the category of glitch, featuring the stuttering beat pioneered by late 1990's electronic artists. His work has been likened to that of some of the early greats of the genre like Kid606 and Like Vibert (aka Wagon Christ).

1700MN’s earlier releases range from heavier electronic assaults to tracks that combine melody and a danceable rhythm into the mix. Critics and music writers have gotten creative in describing his work – "…at times sounds like Rustie being put through a broken blender and played backwards over a broken, overdriven Burial record." – (http://www.crossradar.com/1700-monkey-ninjas-slagg-ii/)

Glitch finds its inspiration in sonic detritus; the sounds are normally edited out of an audio recording, and has come to include sampling and found noises. The range of sounds 1700MN uses includes analog and digital distortion, sampled material, cartoon and vintage video game noises.  There are vinyl stops and starts, machine noises and electronic hum. Like many other experimental glitch artists, 1700MN’s work has an intellectual rather than a visceral appeal, featuring elements of minimalism, techno and digital collage. What began as an underground movement has become mainstream and 1700MN comes as a new wave of the genre, confidently exploring the full range of possibilities in the context of easily accessible new media culture. 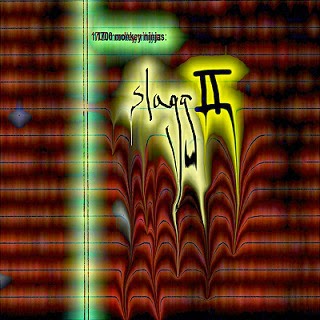 His video output – uploaded to his Youtube channel between August 2012 and November 2013 – combine his digital art (albeit static, an odd choice for a video channel) with the music in characteristically short tracks in the 3 minute range and often less than 2. The video tracks tend to develop one theme/mode in various permutations rather than exploring multiple genres or approaches.

1700MN often uses flashes of humour, both in the choice of sounds (like cartoon and video game noises) and in snippets of dialogue. thuperin' thuckotash features cartoon sampling and dialogue. In some tracks like ehgooggkienendal (another video track), the mix actually approaches traditional song territory. But, before the conventional groove can get roots, it’s broken up and turned into noise.

Many of the tracks, in particular the video pieces, use a strong rhythmic element to glue the various other components together. The original track slagg appears in his Youtube channel, uploaded  October 13, 2012. It’s a playful piece that bashes its way to the end with a combination of noise over melodic piano samples and a danceable/tranceable beat . Flashes of conventional music mixed are happily married to the electronic noise.

The pieces often use playful pop culture references like vintage video game sounds and cartoons and most tracks have whimsical or made up names like Urk, Eenoo Meenoo Muhnoo Moo or
Phrysteel. However, the work does turn serious on occasion like the obviously politically-minded video UStaythe FUCKouttaSYRIA. In it, a cacophony of computer noises percolate over the sound of talking heads on the news. It's repetitive with a purpose and works to get the message across.

Slagg II, his newest release pushes the sound into even more abstract territory. Here the stuttering beat precludes a conventional groove and the moving kaleidoscope of sounds has a distinct sense of fun about it. The electronic meandering ventures into the danceable only to bash away noisily, from squeaks to hisses to gaming sounds, occasionally lapsing into a melodic passage. It’s imbued with a sense of constant change and

experimentation that is maturing with the artist and 1700MN’s prolific output.

The broken, stuttering grooves flit from one idiom to another in a crazy ride of noise. While the effect is pell-mell, the trip along quality means that the genres flow into each other – a percussive section into a repetitive, trance-like section into full frontal noise.  The track plays with the genres, juggling sounds and flitting seamlessly from one to another at a dizzying pace. He goes through a dozen genres, deftly spliced together in a kinetic arrangement. Like the original slagg, it combines analog and digital sounds to create the idiosyncratic idiom. It’s not background music by any stretch of the imagination.

While glitch as a genre has come under fire in recent years for becoming too predictable and obtuse, 1700 Monkey Ninjas comes as a rejuvenating influence. Abstract yet accessible and appealing, the creative energy of 1700MN elevates it above the level of the mundane.

Alongside his work as 1700 Monkey Ninjas, 1700MN – aka Ed Purchla –has recorded music under his own name in a singer/songwriter vein.  His digital designs are available on a wide range of merchandise from t-shirts, bags and stickers to cups and posters. His digital art similarly features a whimsical, cartoony sensibility in a bright and appealing palette and include 1700 Monkey Ninja logo items.

Discography (available on iTunes or Amazon.com):