In anticipation of the 50th anniversary of the Selma Voting Rights Movement, Selma ‘65 explores the virtually unknown stories, and double lives, of Viola Liuzzo and Tommy Rowe.

Based on true events, SELMA ‘65 stars Marietta Hedges and is directed by Eleanor Holdridge.

Performances of SELMA ‘65 will be held Wednesday through Sunday evenings at 7:30 pm with a matinee on Saturday and Sunday at 2:30 pm. Beginning on Friday, September 26th, SELMA ‘65 will play its final performance on Sunday, October 12th, 2014.

In anticipation of the upcoming 50th anniversary of the Selma Voting Rights Movement, Bloody Sunday and the Voting Rights Act, Filloux’s newest work explores the civil rights movement from the perspectives of white activist Viola Liuzzo and FBI informant Tommy Rowe. Rowe was among the Ku Klux Klan members who overtook and gunned down Liuzzo’s Oldsmobile on March 25, 1965. The Klan targeted Ms. Liuzzo, who witnessed racial hatred first hand as a young girl, whilst she drove African-American freedom fighters to safety following the historic March to Montgomery. Ms. Hedges tackles both roles, switching between characters throughout the 75-minute production. 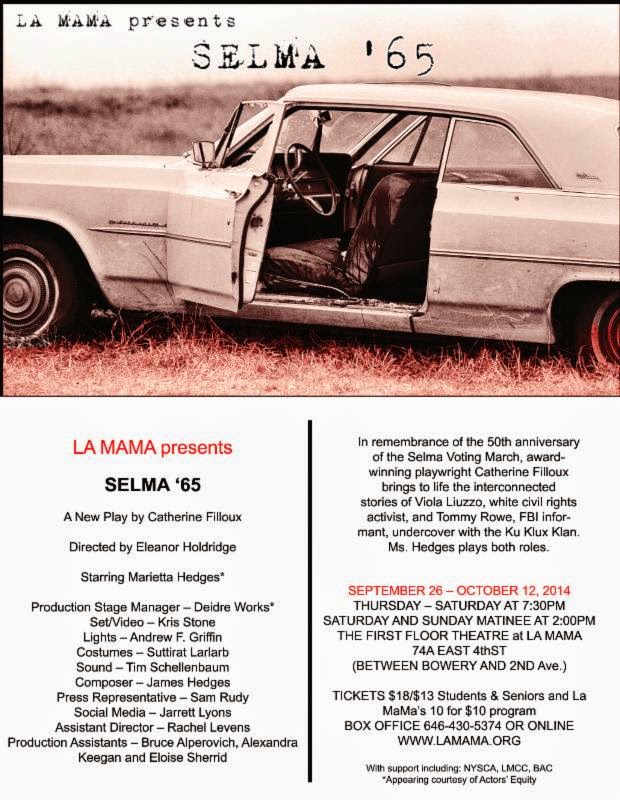 About taking on the story, Catherine Filloux believes it was a necessary step towards preserving history in the minds of theatergoers and staying in-line with her dedication to activism. “As a playwright I focus predominantly on human rights, exploring issues of genocide and other forms of state violence, its crimes and scars. I always choose subject matter, which I personally feel most urgently about. In this case, it is the erosion of our civil rights. The long and often bloody struggle to win the right to vote is obviously ongoing. The Supreme Court recently struck down the heart of the Voting Rights Act of 1965. And as long as the rights of minority voters remain in jeopardy, the play becomes even more crucial to society.”

“SELMA ’65 brings a virtually unknown story in United States’ history to light,” adds Filloux. “In my story, I juxtapose the poetic with the brutal reality of violence and the individual moments of choice within the whirlwind of history.”