TORONTO - From an Aboriginal uprising and fugitive cows to the latest film from an Oscar® winner and restored gems by an animation pioneer, the National Film Board of Canada (NFB) presents a diverse lineup of stellar titles at the 2014 Toronto International Film Festival (September 4–14).

The most recent documentary from Canada’s pre-eminent First Nations filmmaker, Alanis Obomsawin, is featured in the Masters Program: Trick or Treaty? examines the current-day discussion around a controversial 1905 land rights agreement, set against the backdrop of the recent Idle No More movement. Veteran documentarian Paul Cowan teams up with Palestinian animator Amer Shomali to co-direct the Intuitive Pictures/NFB co-production The Wanted 18, which artfully recreates the efforts of the town of Beit Sahour to establish an independent dairy industry during the First Intifada. The Wanted 18 screens in the TIFF Docs Program.

The Short Cuts Canada Program features three new titles as well as two landmark films from the NFB vault. Oscar® winner Torill Kove (The Danish Poet) is back with the autobiographical short Me and My Moulton, about a little girl’s desire to fit in. CODA is a technologically enhanced dance film set to Stravinsky’s The Rite of Spring, co-directed by Quebec husband-and-wife team Denis Poulin and Martine Époque. Toronto’s Randall Okita makes his first foray into full-on animation filmmaking with The Weatherman and the Shadowboxer. And to celebrate the 100th anniversary of the birth of groundbreaking animator Norman McLaren (founder of the NFB’s animation studio in 1941), the NFB has restored Around Is Around (1951) and O Canada (1952); created with frequent collaborator Evelyn Lambart, these early experiments in stereoscopic filmmaking will screen in eye-popping 3D.

Feature documentaries
Trick or Treaty? – World premiere, 84 minutes
In 1905, the British Crown and the Canadian government entered into an agreement with Cree and Ojibway communities in Ontario and Manitoba: the James Bay Treaty – Treaty No. 9. The treaty is still called into question today by Indigenous people and other Canadians who want to set the record straight.

The documentary Trick or Treaty? by Alanis Obomsawin follows the journey of Indigenous leaders in their quest for justice as they seek to establish dialogue with the Canadian government. By tracing the history of 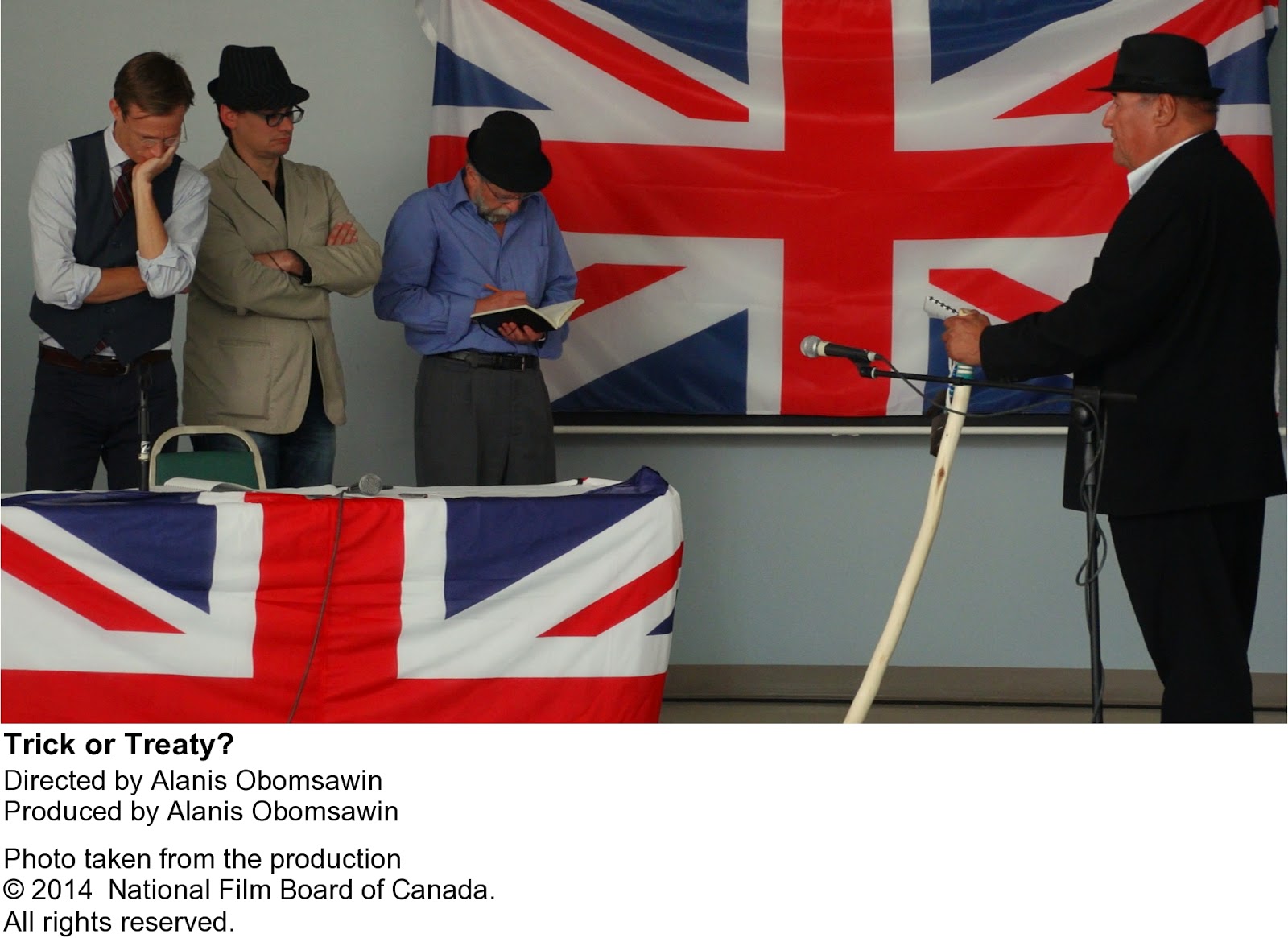 their ancestors, they want to raise people’s awareness about the issues that concern them: respect for and protection of their lands and their natural resources, and the right to hunt and fish so that their society can prosper.

With their sights set on the future, growing numbers of Indigenous youth are at the forefront of a great awareness-raising movement to finally put an end to inertia. In recent years, various social awareness movements have surfaced: conferences to re-examine the context in which the Treaty was signed, the Idle No More movement to mobilize communities, Cree Chief Theresa Spence’s hunger strike, and the 1,600-km trek to the Canadian Parliament in Ottawa by David Kawapit and those who joined him. In her film, Obomsawin gives those who refuse to surrender a chance to speak out.

A member of the Abenaki Nation and one of Canada’s most distinguished filmmakers, Obomsawin has directed more than 30 NFB documentaries over four decades, chronicling the lives and concerns of First Nations people and exploring issues of importance to all Canadians.

Her landmark documentary Kanehsatake: 270 Years of Resistance was named Best Canadian Feature Film at TIFF in 1993. Obomsawin’s previous film, Hi-Ho Mistahey!, had its world premiere at TIFF 2013 and was runner-up for the festival’s People’s Choice Award in the documentary category.

Trick or Treaty? was produced by Alanis Obomsawin and executive produced by the NFB’s Annette Clarke.

The Wanted 18 – World premiere, 75 minutes
It is 1987, and the First Intifada has just begun. Palestinian communities want local alternatives to Israeli goods. Residents in filmmaker Amer Shomali’s village of Beit Sahour, a suburb of Bethlehem, decide to create a co-operative dairy farm, purchasing 18 cows from an Israeli kibbutz and transporting them to the West Bank. These new dairy farmers are pacifist intellectuals and professionals who know nothing about raising cattle or operating a dairy farm. But after some trial and error, the newly minted “lactivists” succeed, and the population comes to depend on the “intifada milk”―so much so that these 18 cows are declared “a threat to the State of Israel.”

Blending interviews, archival footage and whimsical animation, The Wanted 18 tells the unlikely story of how these cows became an inspiring symbol of resistance, sparking a self-sufficiency movement and remaining hidden even as hundreds of Israeli soldiers searched for them.

The Wanted 18 was entirely shot in Palestine, where Shomali is based. This is Shomali’s first professional film as an animator.

Me and My Moulton – North American premiere, 13 minutes
In this latest animated short from Oscar® winner Torill Kove, a seven-year-old girl and her sisters ask their parents to get them a bicycle. Our young protagonist struggles with her sense that her family is somehow unconventional, and her loving yet hopelessly out-of-touch parents prove to be a source of quiet embarrassment and anxiety. Unfolding on a bright, colourful palette, the film views the creative attitudes of the parents through the eyes of their introspective daughter. Me and My Moulton tells the charming story of a young girl whose sensitive nature sometimes makes it difficult for her to be honest with the ones she loves most. 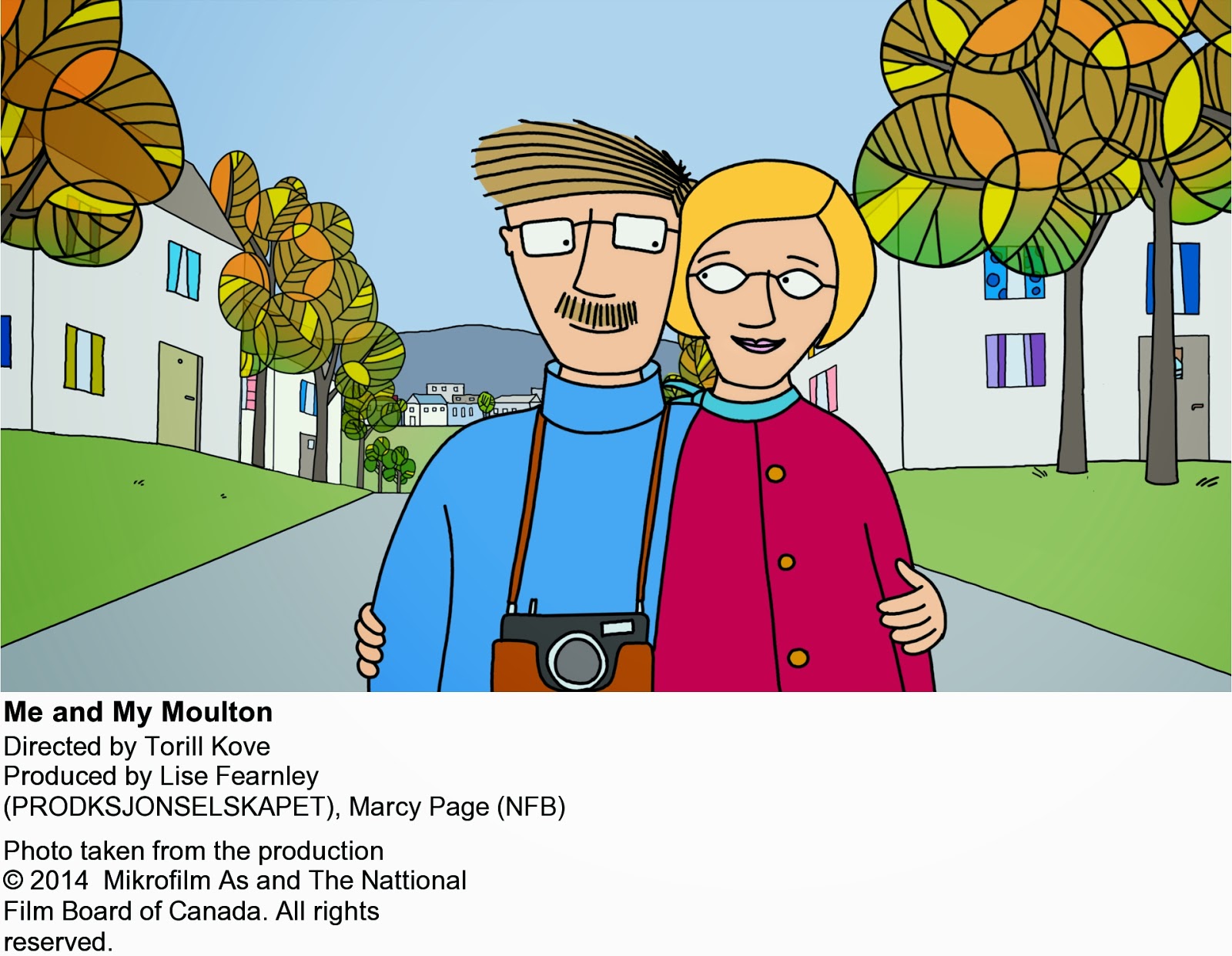 Me and My Moulton is a co-production with Norway’s Mikrofilm AS. It was produced by Lise Fearnley (Mikrofilm AS) and the NFB’s Marcy Page, and executive produced by Fearnley, Michael Fukushima, Roddy McManus and David Verrall (NFB).

CODA – World premiere, 11 minutes
From the glittering ground slowly emerges a mass of moving particles. Several more soon join in, dancing as though they were luminous bodies in the infinite space of the cosmos. These precarious shapes continually shatter, appear and disappear, transform and evolve, to the rhythms of the final transition of Stravinsky’s Rite of Spring...

CODA draws on advanced digital technologies to offer a new vision of dance in cinema. Using motion capture (MoCap) techniques and particle processing, designers Denis Poulin and Martine Époque create virtual dancers that are free of any morphological features. They’ve crafted a film in which the dynamic movements of real dancers are transformed into images of motion in its purest form.

Addressing environmental themes by way of metaphor, CODA depicts a universe where space and time collide, deploy, and dissolve. The film was co-produced by Poulin and Époque with René Chénier (NFB) in collaboration with Marc Côté (FAKE Studio). 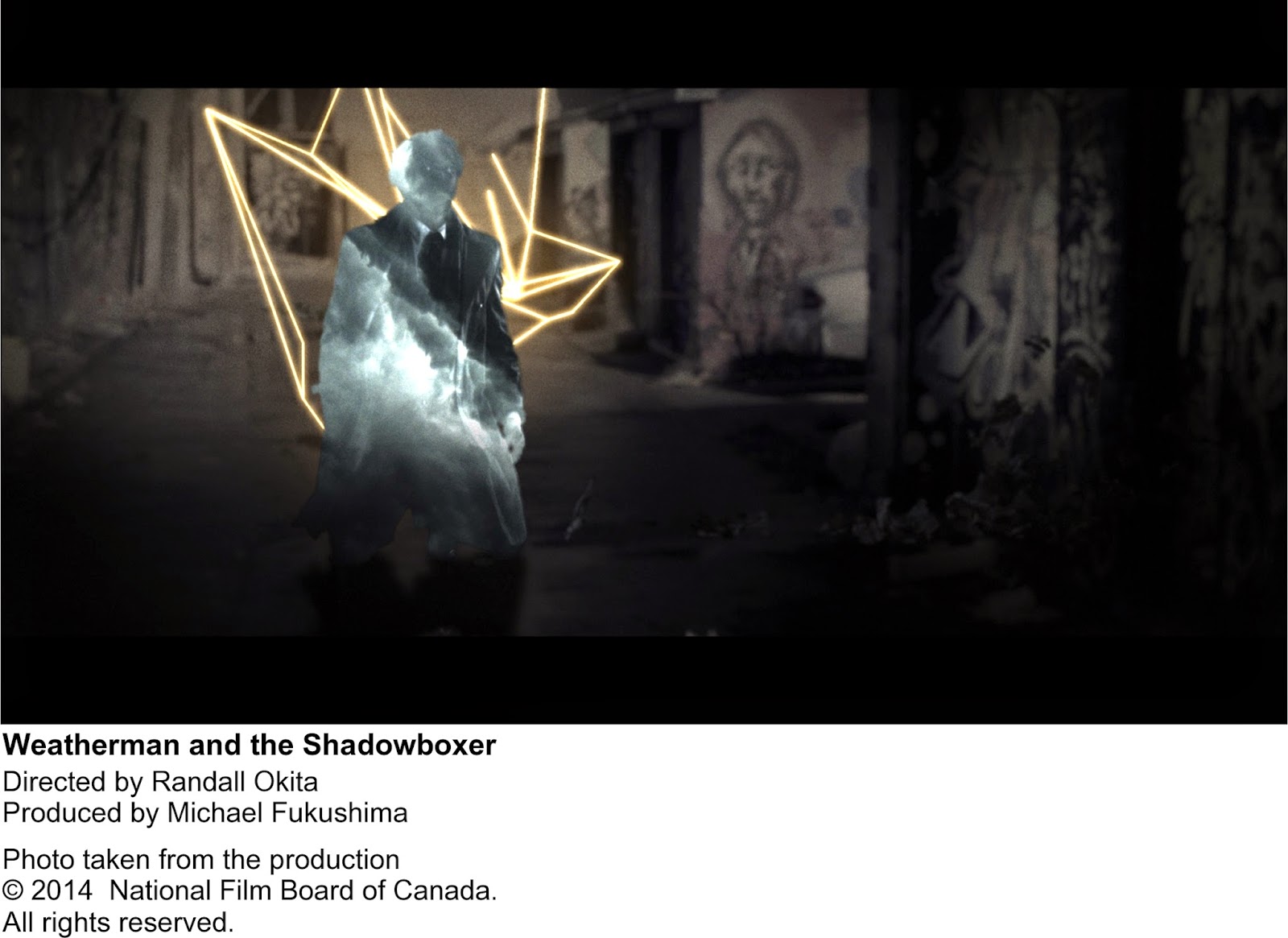 The Weatherman and the Shadowboxer – World premiere, 9 minutes
This visually haunting animated short follows two brothers who share the scars, though not the memories, of an untold history that has driven them to existential extremes. Combining high-speed camerawork, striking art direction and intricate animation sequences, acclaimed Toronto-based filmmaker and visual artist Randall Okita crafts a poetic elegy to connectedness and survival.

The film was produced by Maral Mohammadian and Michael Fukushima for the NFB, with Fukushima also acting as executive producer.

Around Is Around – North American premiere, 7 minutes
In Around Is Around, director Norman McLaren creates a 3D effect with cathode-ray oscilloscope patterns and images of spherical shapes evolving in space. “The Festival of Britain asked the National Film Board of Canada to contribute two shorts for a program of stereoscopic and stereophonic films being shown at the Telecinema in London, with the specific request that the films be of a cartoon or animated nature... To our knowledge, no stereoscopic cartoon-type animated film had been made before.” – Norman McLaren. With animation by Evelyn Lambart and music by Louis Applebaum. The film was commissioned by the British Film Institute for the Festival of Britain in 1951.

Around Is Around was restored in 2014 to commemorate the centenary of Norman McLaren’s birth. NFB restoration team: Luigi Allemano, Eloi Champagne, Don McWilliams.

O Canada – North American premiere, 1.5 minutes
Following the enormous success of the NFB stereoscopic shorts commissioned by the BFI for the Festival of Britain in 1951, director Evelyn Lambart created O Canada, an experimental, stereoscopic trip through the Canadian countryside that makes use of the “travelling zoom” invented by Norman McLaren in 1937.