To be released October 14, 2014, via Chahatatadra Music:
Outhead - an Arthouse Quartet Blending the Free-Minded Jazz of Ornette Coleman, Archie Shepp and Roland Kirk with the Post-Beat Sounds of the Lounge Lizards and Morphine - Presents Its Second Album: Send This Sound to the King 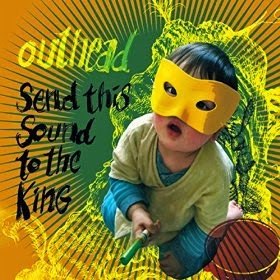 This Sound to the King, to be released October 14, 2014 via Chahatatadra Music - juxtaposes catchy melody and swinging grooves, headlong caterwaul and dreamy spoken word. Guest guitarist Peter Galub provides spiky six-string atmosphere to several tracks, and multiple voices are heard, male and female.Send This Sound to the King is the sound of both edge and allure.

Outhead's new album is the follow-up to the band's 2008 release, Quiet Sounds for Comfortable People, which was a favorite of Downtown Music Gallery's Bruce Gallanter for its "inventive dynamics" and "fabulous groove." He heard a kinship with Ornette Coleman's two-sax band with Dewey Redman, while Weiss lists Archie Shepp and Roland Kirk as further references, for both their stentorian roar and the theatricality of their '60s work. The sly humor and sheer accessibility of Send This Sound to the King makes Outhead akin to John Lurie's iconic downtown New York band the Lounge Lizards, while rock fans may even hear echoes of the baritone-driven, post-Beat stylings of vintage indie-rock trio Morphine at times. Yet for all its hip influences and antecedents, Outhead is above all an individualist outfit, playing music that isn't quite like anything else out there.

• Send This Sound to the King: Track by Track

Outhead's second album kicks off beautifully with the majestic, melody-rich"Ode to John Denver, or How I Learned to Stop Worrying About Death," a woozy rubato spiritual by Weiss in a classic Albert Ayler mode, with a droning foundation of harmonium and arco bass for an East-meets-West feel. Next comes "The

Chairman," a laconically catchy tune by Gurke that's blessed by Woodcock's grooving, textured bass playing and guest electric guitar by Peter Galub, who lends a rock'n'roll feel to the track - particularly with his fantastically wild, wailing solo near the end. Weiss' "The Palimpsest" makes a nod to John Zorn's Masada songbook; the composer's alto leads with the faintly Middle Eastern melody and a cry in his tone, though Gurke's baritone soon entwines serpentine around it for their characteristic sax blend.

"Glass Houses and Gift Horses" is a headlong rocker by Weiss, with a deceptively sophisticated form. The composer plays tenor, while Gurke's solo takes advantage of multiphonic effects and the overtones possible on the baritone. Westbrook, who has a Masters in Fine Arts degree in poetry, wrote the music and verses for the artfully produced soundscape "A Made Truth," with the sexual subtext of the words made plain in the initial sly recitation by Sarah Horashek and then undercut oddly and humorously by Eunjin Park's less-native way with the same lyrics."Trotsky" is a groovy free-bop number by Charlie in the early Ornette Coleman manner, the harmolodic icon being a prime influence on every member of the band. The album's offbeat closer,"Uncle Ho," features music by Charlie and words by Alex, with a chorus of women's voices taking a key role. Roland Kirk'sVolunteered Slavery is a key influence here, though with more demented humor in the words than political fire. The sound of Alex and Charlie's twinned saxophones is a textural highlight, as on the entire album.