“Music is a language,” exclaims Ethiopian sax player and Nile Project musician Jorga Mesfin, “and in the Nile Project, the conversation is about love.” The love of craft, of place, of the river that connects eleven countries and millions of people. 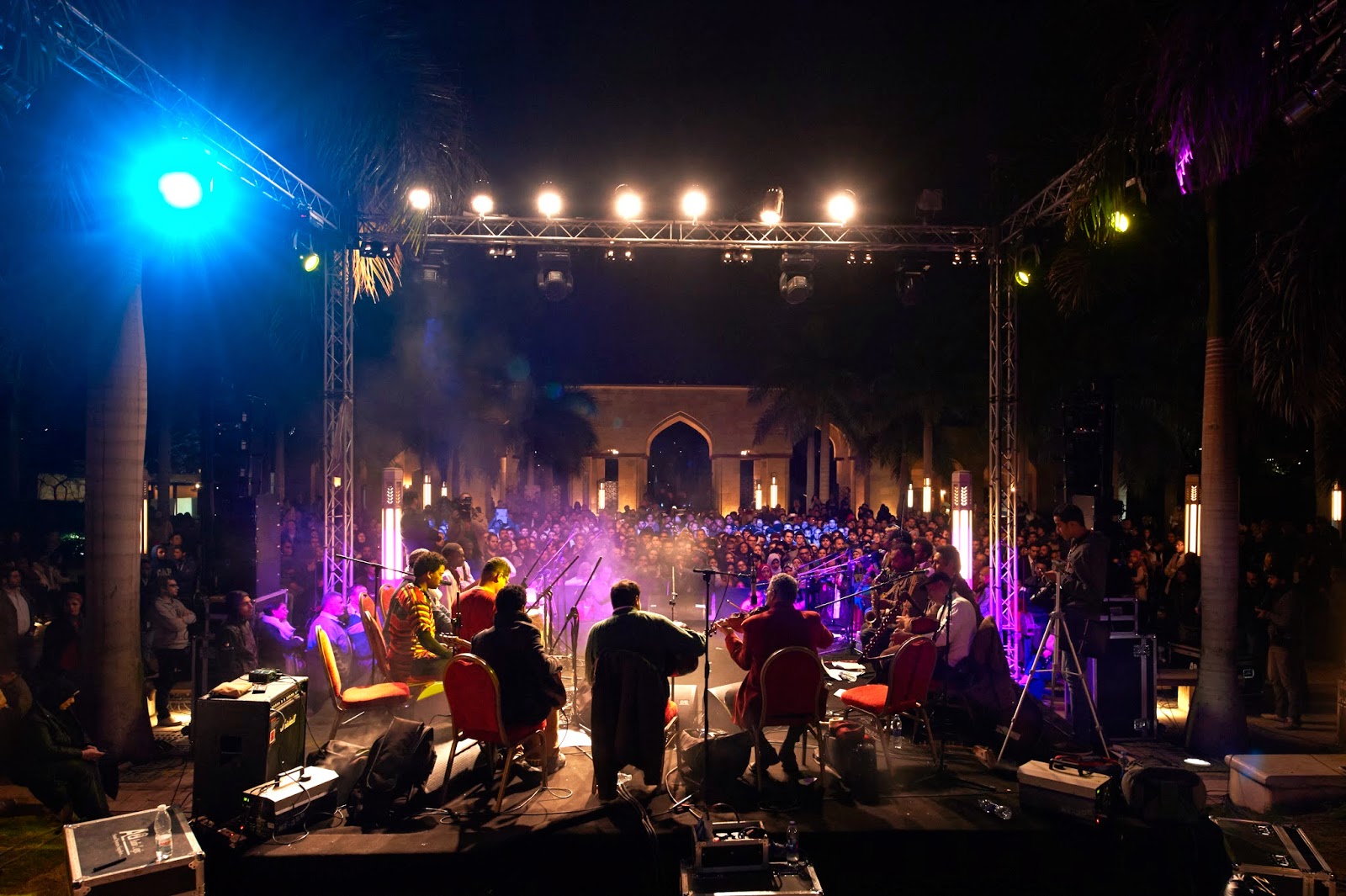 The passion and affection spring forth via one of the tightest cross-cultural collaborations in history. Forged over weeks of carefully calibrated workshops and participatory composition, the Nile Project Collective members hail from all along the great river, from its sources beyond Lake Victoria to its delta in Egypt.

They have learned each others’ traditions well enough to create substantive music together, work that goes far deeper than mere meet-and-greet jam sessions. An ensemble of a dozen musicians will tour the US in January-May 2015.

To craft this music, Egyptian and Ethiopian artists have mastered each others’ wildly different modal systems. A Burundian bassist has become the foundation within head-spinning Ugandan rhythms. Instruments that parted ways millennia before are reunited and pushed into new tunings, new places. Love songs and lullabies 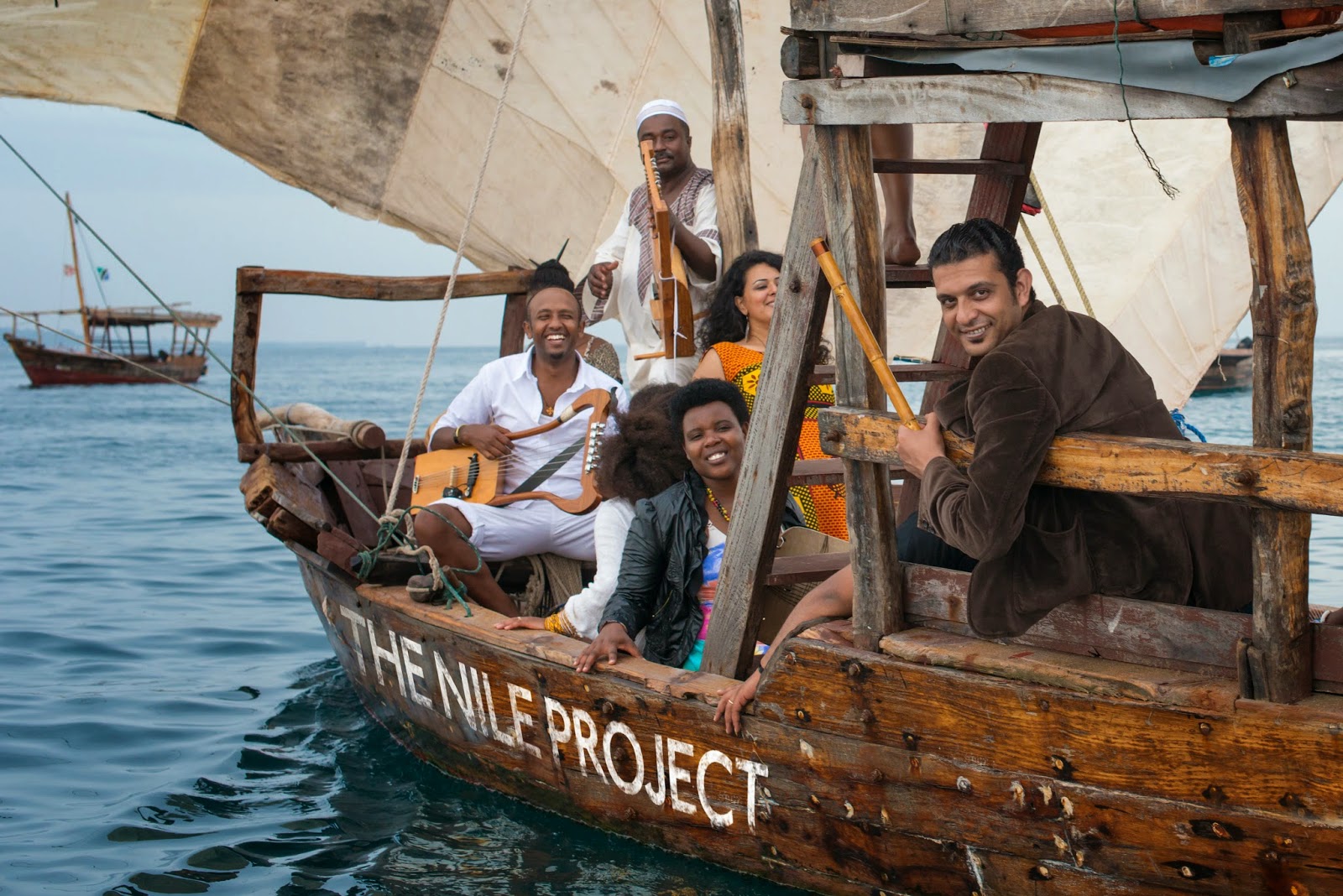 Creating together, with the role of lead and soloist rotating among the players, the Collective has crafted emotionally stirring, musically complex pieces that weave together over the course of a concert into one long and shifting composition. This work serves as a rallying point to draw more and more people from more and more places into a meaningful conversation, where love and art intertwine with politics, history, ecology, and commerce.

Yet it all starts with sound, and with listening. “In the end, it is all about learning to listen,” reflects Egyptian singer and Nile Project musician Dina El Wedidi. “I think that is what we all took away from this, whether it is the participants or the audience. Listening is the basis for understanding.”

The Nile Project 2015 US Touring Ensemble

Mohamed Abo Zekry: Despite his tender years, this oud player has a stunning command of his instrument, as well as an open ear for other forms, skills that got him a recent album deal with Harmonia Mundi.

Alsarah: Based in Brooklyn, this soulful Sudanese singer and ethnomusicologist’s songs have won high praise from roots-music tastemakers like Songlines Magazine. 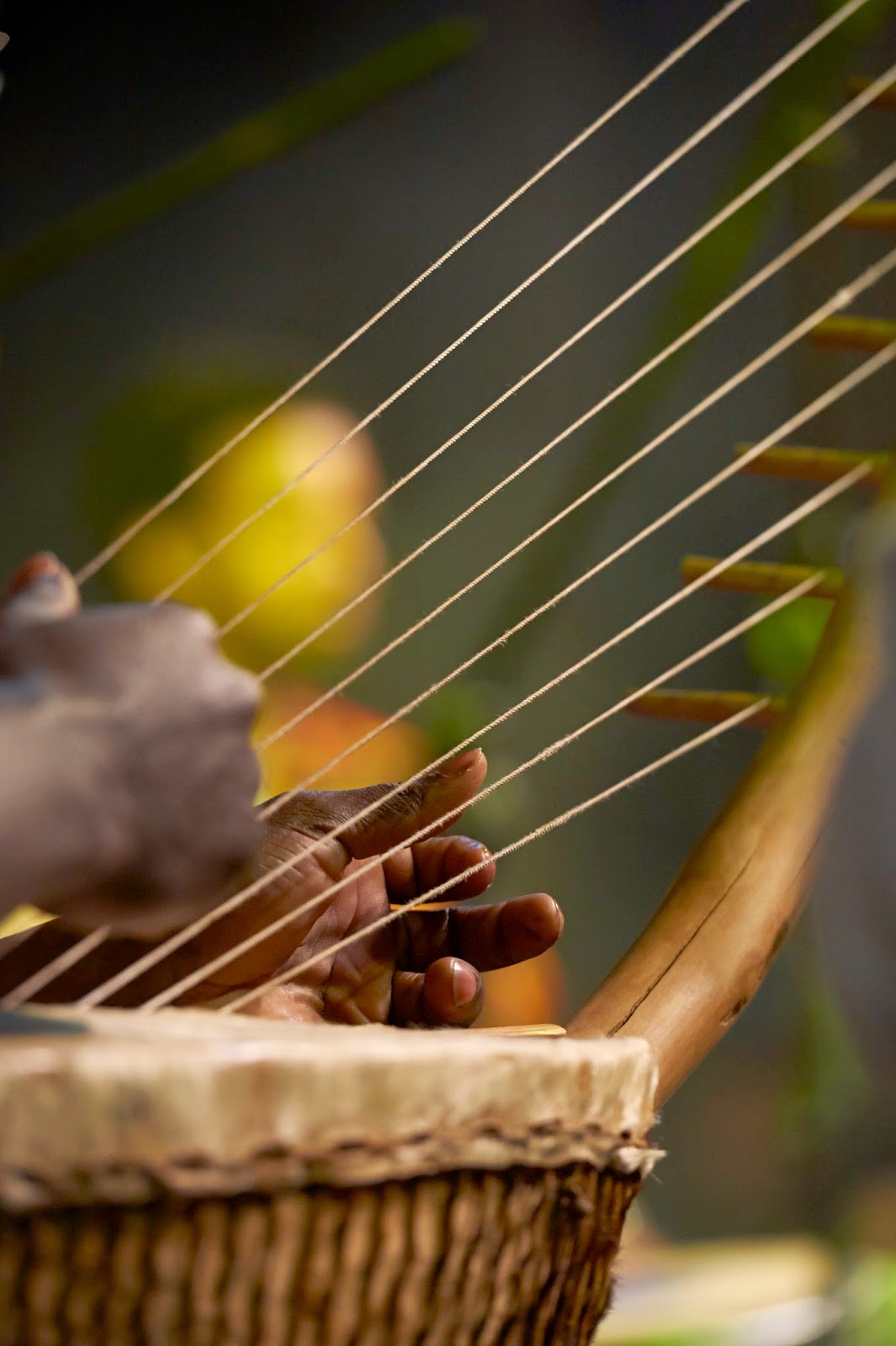 Hani Bedair: When the biggest stars in the Middle East need daff (hand drum) or riq (traditional tambourine), they call Bedair, whose percussion skills have also earned him a teaching position at several respected Cairo institutions.

Nader El Shaer: Born in the culturally rich town of Port Said, Egypt, El Shaer taught himself accordion and ney, only to fall in love with the tones of the kawala (end-blown cane flute) and its role in Arabic classical music.

Meklit Hadero (select appearances only): Co-founder of the Nile Project, this American-based Ethiopian singer frequently digs deep into soul and hip hop, but never loses sight of her roots.

Jorga Mesfin: This self-taught sax player meshes jazz with Ethiopia’s wealth of musical forms and ideas, both as a respected band leader and favorite sideman for greats like Mulatu Astatke.

Kasiva Mutua: Kenyan percussionist and singer Mutua may have learned drumming from her grandmother, but has developed her own knack for powerful Afropop beats. Her expressive playing can tell a story on its own, or keep a band perfectly in the pocket.

Sophie Nzayisenga: The first female master of the Rwandan traditional zither (inanga), Nzayisenga learned at her internationally acclaimed father’s knee before setting out to make the instrument her own.

Dawit Seyoum: Known for his flexibility, Seyoum rocks both the krar and the bass krar, the six-string powerhouse harps at the heart of much of Ethiopia’s music.

Steven Sogo: Burundi’s leading bassist, this multilingual multi-instrumentalist can play anything with strings, including the umiduri, Burundi’s answer to the birembau. Add to that Sogo’s wonderful voice, and it’s easy to see why he was named a World Bank musical ambassador.

Selamnesh Zemane: Hailing from a long line of unique culture bearers in Northern Ethiopia, this young singer has brought her traditions to collaborations with indie darlings like Debo Band and The Ex.

The ensemble flows from a larger collective of musicians—most of whom are young and work across genres—that in turn arose from a long, thoughtful recruitment and collaboration process. The Nile Project strived to include musicians from many different cultural communities along the Nile, while finding a compelling combination of instruments and voice to support and balance one another.

Over the course of two gatherings and a major, five-country African tour, the collective has gained an increasing sense of how to craft joint works, guided by their own interests and by the Collective’s leaders: Nile Project Musical Director Miles Jay, a contrabassist and composer who spent much of the last decade living and working with prominent artists across the Middle East and Africa; and Nile Project executive director Mina Girgis, an Egyptian ethnomusicologist and curator who specializes in creating innovative musical experiences. The exchange of know-how has had significant impact on the participants—bassist Steven Sogo enthuses about his newfound love for Ethiopian modes—and has molded a sound as broad and powerful as the Nile itself.

“The set is a continuous flow, like the river,” explains Jay. “We craft creative transitions from one piece to the next, inspired by the Nile’s soundscapes. So, we end a song and the percussionist continues the pulse, even through the applause. Or all the strings at the end of the song go into a drone, and then we introduce a melody to modulate to the next key.” 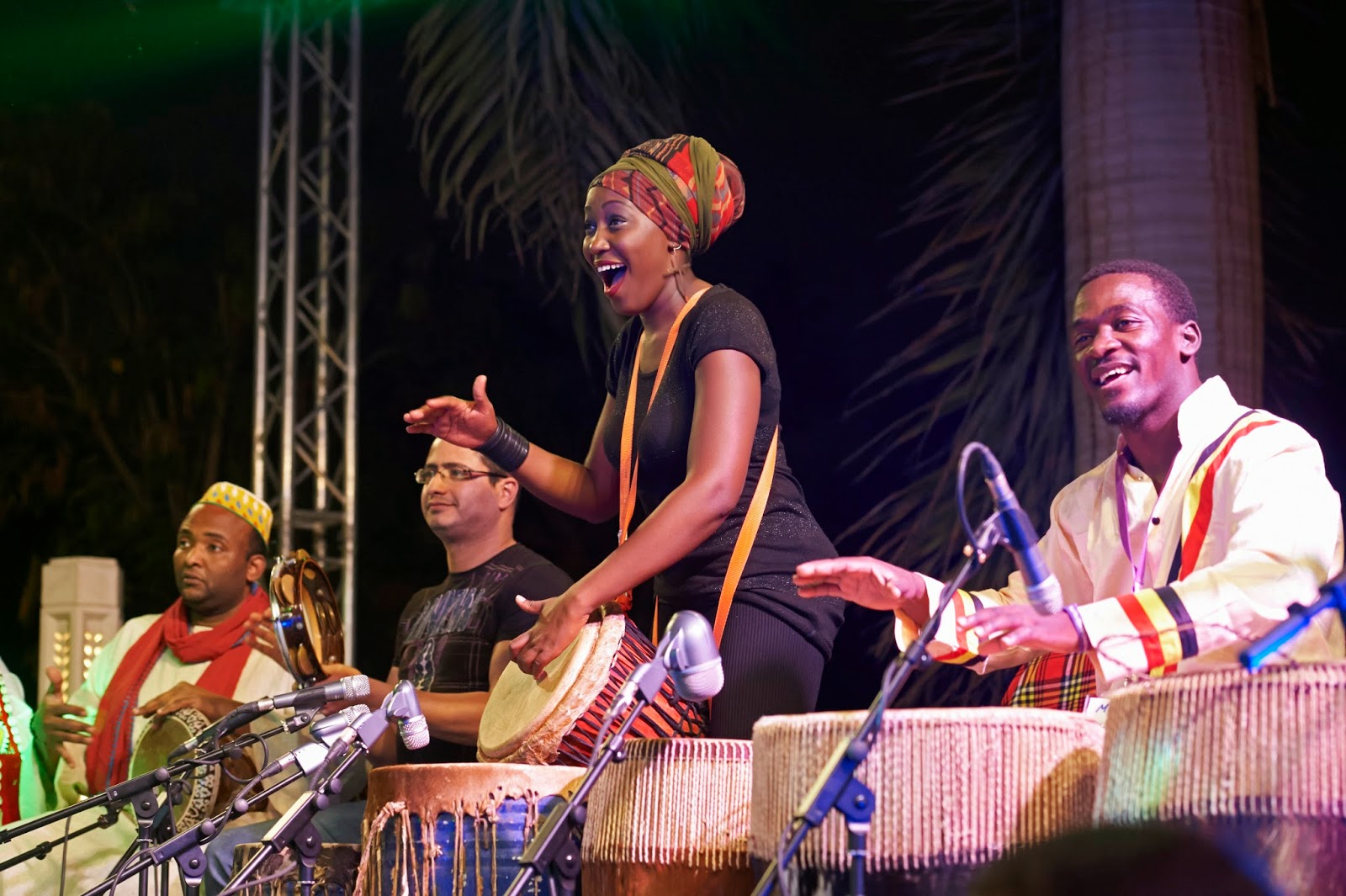 Evoking the Nile is not enough, however. Many trans-national music projects stop at the stage, when top performers break out their best for an audience. For The Nile Project, live performance is merely one stop on a long, compelling journey. “Music is the gateway that lets us envision the Nile Basin, its people, its challenges,” explains Girgis. “Yet the concert experience is just the beginning.”

The Nile Project uses music to spark cultural curiosity and engage audiences—particularly university and student audiences—encouraging them to feel connected to the river and to explore new approaches to its large-scale problems. In an evolving series of interlocking programs that spring from the musical experience, the project aims to inspire, educate and empower young people worldwide to become Nile Citizens. These growing circles of participants will contribute to Nile sustainability through their music, leadership, and innovative ideas.

For this reason, nearly every stop on the U.S. tour will be accompanied by a series of workshops and symposia involving the Nile Project participant musicians, complemented by the faculty resources and student interest of each campus. From water issues to women’s roles, from musical discovery to the image of the Nile through history, a wide range of topics tackle the river’s complexity and aim to draw students into active roles. These activities expand the circle of conversation begun by the musicians, to encompass entire academic communities.

The exchange on stage and the long interweaving of voices and ideas that preceded it, however, sets the tone for other interactions, dedicated to matters beyond music. “No matter what topic we’re addressing, the music shows something that we can aspire to,” notes Nile Project Musical Director Miles Jay. “It shows it in subtle terms.” 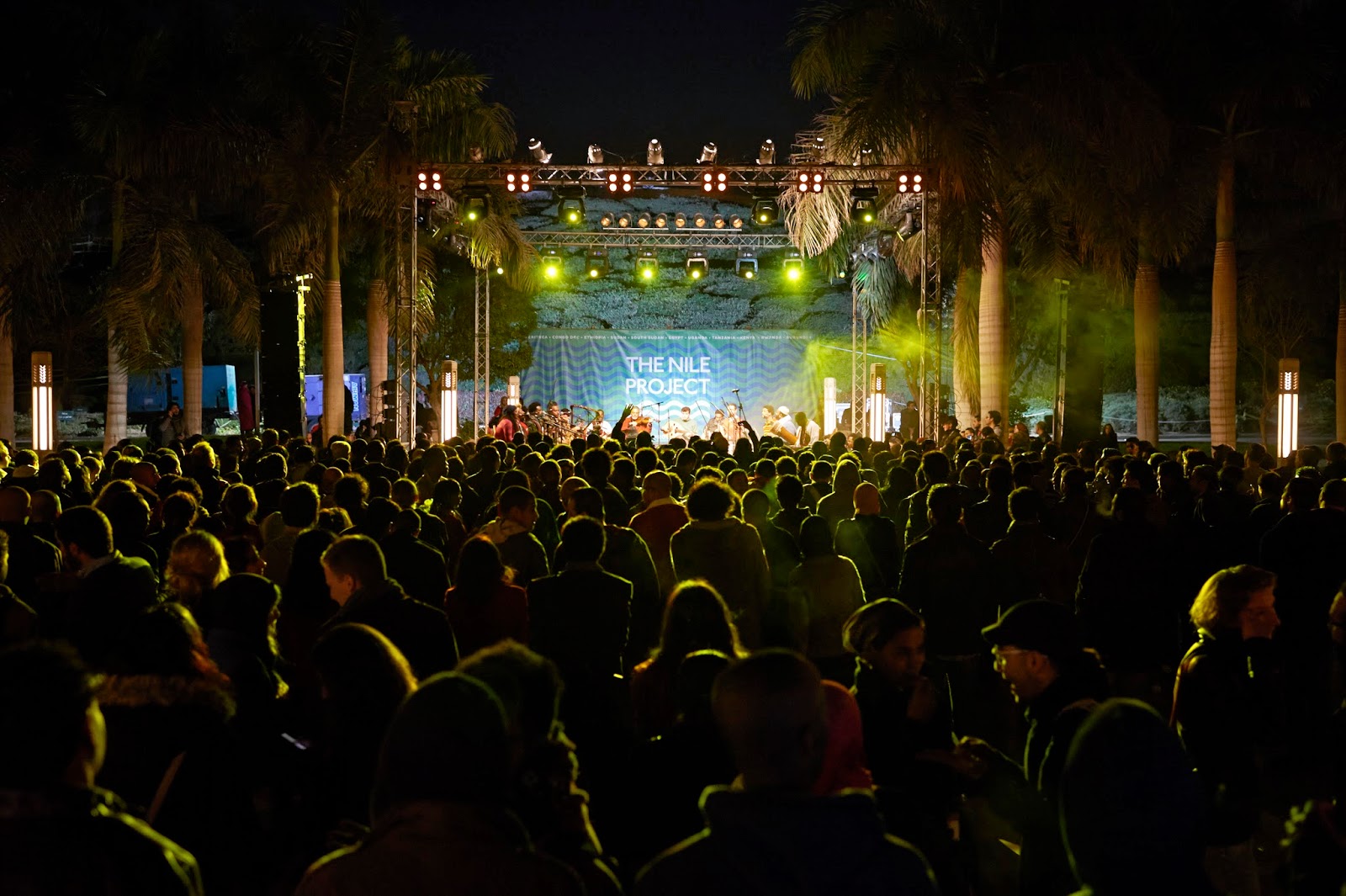 The Nile Project will offer a variety of workshop themes during its 2015 US Tour, including those below. These programs will serve as catalysts for longer-term engagement with students and faculty beyond the tour ensemble’s musical performances.