New from Smithsonian Folkways: New Orleans Brass Bands: Through the Streets of the City (out January 27 2015)

New from Smithsonian Folkways: New Orleans Brass Bands: Through the Streets of the City (out January 27 2015)

• Get an early listen
• Preview/buy

For more than a century, the signature sound of New Orleans has been the brass band — at once a source of celebration, collective expression, and community pride. On January 27th, Smithsonian Folkways will release the newly-recorded collection New Orleans Brass Bands: Through the Streets of the City, bringing together for the first time in one recording three musical generations that represent three dominant styles of 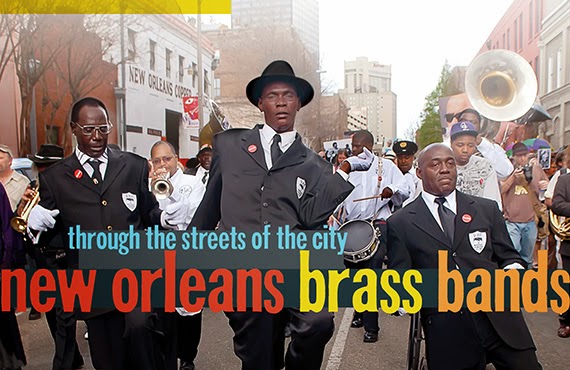 With the 10th anniversary of Hurricane Katrina approaching in 2015, album producer and Liberty Band leader Dr. Michael White believes that the renewed interest in brass band music is due in part to a wider audience appreciating and preserving the history and culture of the region after the natural disaster. Though many musicians lost their lives, instruments, and personal archives in the storm, this album is a testament to the sheer will of these groups to continue despite hardship.

The oldest group on Through the Streets of the City is the Liberty Brass Band, formed in 1985. The six songs they contribute, including the 1911 jazz march “Panama” and one of the best-known traditional jazz songs, “Paul Barbarin’s Second Line,” keep alive the spirit of the early brass bands.

Named after what Dr. White considers one of the oldest traditionally African American neighborhoods in America, Treme Brass Band, founded in 1991, bridges the old and new, ripping though parade favorites like the infectious “Give Me My Money Back,” among others.

For the past 15 years, Hot 8 Brass Band has been one of the most popular and visible funk-style brass bands in New Orleans. Like most of the younger bands, Hot 8’s style blends influences from the Dirty Dozen and Rebirth, with elements from contemporary rhythm & blues, rap, and its local variation, “bounce.” Merging out of two former Fortier High School Groups, the members of Hot 8 grew up together and maintain strong, family-like ties.

While Hot 8 has seen both local and international success and acclaim, they have also experienced serious tragedy. Four original members of the group lost their lives due to street violence and illness, and the band was displaced and scattered across the country during Hurricane Katrina. Upon returning to the city, the band regrouped and continues to maintain a heavy touring schedule, as well as a regular residency in New Orleans.

Hot 8 Brass Band prove why, since forming 15 years ago, they’ve remained arguably the most popular funk-style brass band, with original numbers like hometown ode “New Orleans (After the City)” and the aptly titled “Keepin’ It Funky.”