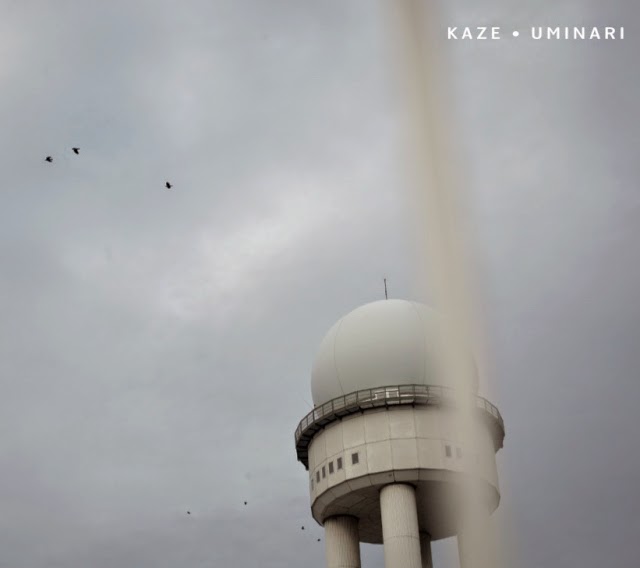 Uminari is a Japanese word that refers to a sound rising from the sea, a low-frequency roar that portends a coming storm or tsunami. The poetic word serves as an ideal title for the third CD, available in the US and Canada on May 5, 2015 on Circum-Libra, from the unconventional international quartet Kaze. The two-horn quartet is equally adept at the calm and the storm, with expressive subtleties giving way to overwhelming torrents of sound.

Japanese pianist Satoko Fujii and trumpeter Natsuki Tamura reunite with French trumpeter Christian Pruvost and drummer Peter Orins for the band's most evocative and inventive outing to date. The music for Uminari was developed over the course of a 12-day tour of Japan during which skeletal compositions by each of the quartet's members were elaborated and experimented on by the group as a whole.

"Every day we decided to play with different ideas," Fujii recalls. "Today we'll play the piece one way, the next day a completely different way. We wrote very simple music beforehand and developed it together."

Uminari opens at gale force with "Tioky Atsimo," the first piece to date contributed to the ensemble by Pruvost. The heady whorl of sound ultimately subsides to a stutter-stop rhythm by Fujii and Orins, accompanied by breathy rasps and brassy bleats by the trumpeters, who ultimately fall in line with the insistent beat. A second eruption ensues, as the piece becomes an exercise in forming order out of chaos.

Orins' "Vents Contraires" follows from the opposite extreme, starting from a place of shimmering stillness with the drummer's scraped cymbals and a low murmur from the horns. The piece builds gradually in intensity over half of its 14 minutes before dissolving into pointillistic shards. "Running Around," the first of two Fujii compositions on the album, begins with a circuitous melody articulated by the trumpeters, ceding to a fragmented groove from the rhythm section. At the midpoint it becomes a play of dynamics and silences among the four musicians.

Fujii and Tamura originally met Orins in 2002 when the pianist's quartet shared a bill with the drummer's collective Impression in his hometown of Lille, France. Nearly a decade later they crossed paths again and Orins suggested a collaboration with Pruvost, inaugurating Kaze's unusual instrumentation.

"We immediately became friends," Fujii says. "We felt like we shared the same kind of musical values. And we had so much fun doing this group we just kept playing together."\

Uminari is one of three new releases scheduled for 2015 from the always- prolific Fujii, whose prodigious output is only rivaled by her remarkable drive to constantly explore new terrain. Also on tap are albums by two new ensembles: Tobira, which expands the pianist's New Trio to a quartet with the addition of Tamura; and the Satoko Fujii Orchestra Berlin, the fifth city-specific large ensemble she's founded, and the first group launched in her newly adopted home.

Kaze is a departure from much of Fujii's output, being a collective rather than a group led by and dedicated to performing the music of the powerful composer. "I don't have much opportunity to be a side musician," she says. "Almost all the time I'm the leader; I write and direct the music and arrange the gigs. Finally, this gives me a chance to play with great musicians who all write music and all sound different. I have so much fun playing their pieces." 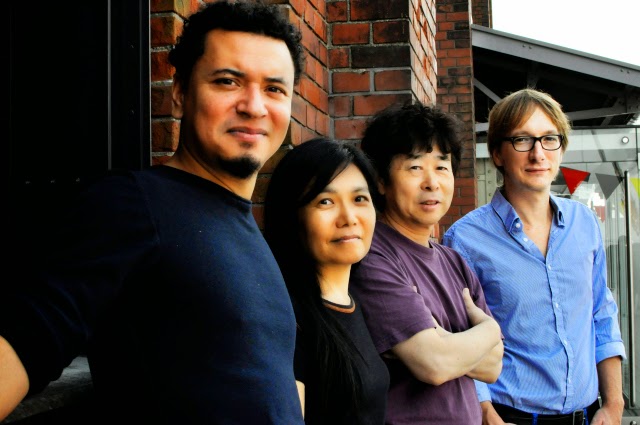 One of the most original and wide-ranging voices in modern jazz, Satoko Fujii has documented her abilities on more than 70 CDs in less than 20 years. The Tokyo native relocated to the U.S. to study at Berklee College of Music and New England Conservatory, where she was mentored by the likes of Paul Bley, Herb Pomeroy, George Russell and Cecil McBee. Through her touring and collaborations she's truly become a citizen of the world, most recently settling in Berlin. She's founded jazz orchestras there as well as in New York and Tokyo, Nagoya, and Kobe in Japan. Fujii has also led the quartets Ma-Do and Tobira and an avant-rock group featuring Ruins drummer Tatsuya Yoshida. In recent years she's formed fruitful collaborations with such inventive artists as pianist Myra Melford, drummer John Hollenbeck, violinist Carla Kihlstedt, and guitarist Elliott Sharp.

Trumpeter Natsuki Tamura is internationally recognized for his ability to blend a unique vocabulary of extended techniques with touching jazz lyricism. Since 2005, Tamura has focused on the intersection of European folk music and sound abstraction with Gato Libre, a quartet featuring Fujii on accordion, Tsumura Kazuhiko on guitar, and the late Koreyasu Norikatsu on bass. In 2006 he co-founded the collaborative trio Junk Box with Fujii and drummer John Hollenbeck, while his most recent quartet, First Meeting, features Fujii, drummer Tatsuhisa Yamamoto and electric guitarist Kelly Churko. Born in Otsu, Shiga, Japan, Tamura studied at Berklee College of Music and the New England Conservatory and has taught at the Yamaha Popular Music School and at private trumpet studios in Tokyo and Saitama.

A generous, insatiable and prolific musician, trumpeter Christian Pruvost has forged meaningful collaborations in jazz, improvised music and live performing arts settings. With Didier Aschour, Pruvost is a co-director of Round the World of Sound, which gathers 14 musicians from the Muzzix collective and Dedalus ensemble to perform the madrigals of eccentric poet/composer Moondog. In a new project called PCM Blat, he explores repertoire from medieval to contemporary and improvised music with Maxime Morel (tuba) and Samuel Carpentier (trombone). He is also a member of Circum Grand Orchestra and La Pieuvre, the improvisational orchestra conducted by Olivier Benoit.

From a classical music background, Peter Orins branched out to study the drums at the Conservatoire National de Région of Lille, where he studied with Guy Gilbert, Jean-François Canape, and Gérard Marais. At the same time, he studied improvisation with Fred Van Hove and composition with Jean-Marc Chouvel and Ricardo Mandolini.  Beginning in the mid-'90s, Orins played in the bands that would come to form the Circum collective: Impression, Quartet Base, and the Stefan Orins Trio. He coordinated the Circum collective until its fusion with fellow collective CRIME in 2010, and created the 10-piece Circum Grand Orchestra. He also plays in La Pieuvre, a French-Vietnamese project called Hué/Circum, and the Wei3 trio with German pianist Jarry Singla and Polish bass player Maciej Garbowski. Since the creation of Muzzix in 2010, Orins has coordinated the artistic direction of that collective.