Spotlight South Africa
Canadian Stage celebrates the best of South African performance art with three week festival showcasing six unique productions, including the most in North America for the first time;
April 8 to 25, 2015

Toronto, ON – Canadian Stage presents Nongogo, The Meal, Hatched, Ubu and the Truth Commission, Dominion and Chandelier in a three-week festival of South African performance as part of Spotlight South Africa. A tribute to the extraordinary vitality and originality of artistic work produced in the country, the 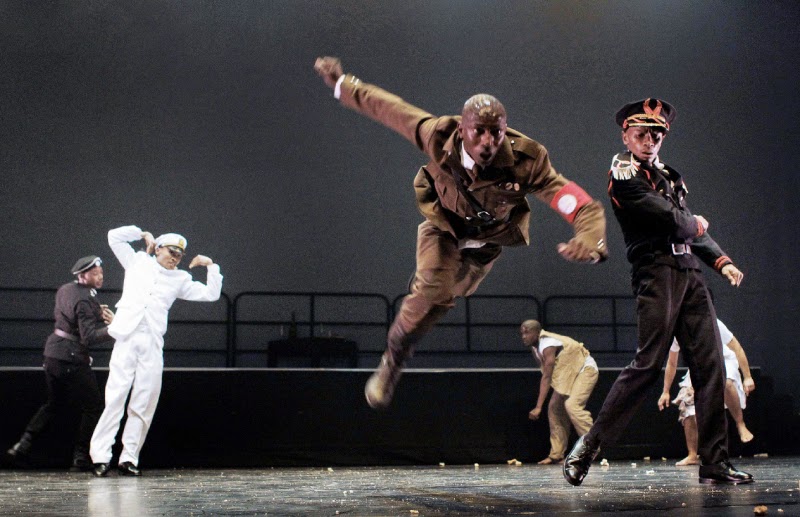 A biennial celebration in its third year, Canadian Stage’s Spotlight Festival series highlights work from the leading artists of a selected country, often giving Toronto audiences an opportunity to experience the work of renowned artists for the first time. Almost doubling in size since its last iteration, Spotlight South Africa is the largest Spotlight Festival to date.

• Each week of the festival will open two new productions, beginning with Nongogo and The Meal (Apr. 8 to 12). On stage the second week is Ubu and the Truth Commission and Hatched (Apr. 15 to 19), with Dominion and Chandelier (Apr. 22 to 25) closing out the festival.

“When I made my first trip to South Africa in September 2013, I was peripherally aware of the vitality of the performing arts scene there – but admittedly unprepared for the magnificent force and determination of the artists I would meet or whose work I would get to see,” said Matthew Jocelyn, artistic & general director. “It soon became clear that our third Spotlight Festival had to centre around the theatre, dance and performance art of this great nation, now celebrating its 21st year since liberation. A true coming of age.” 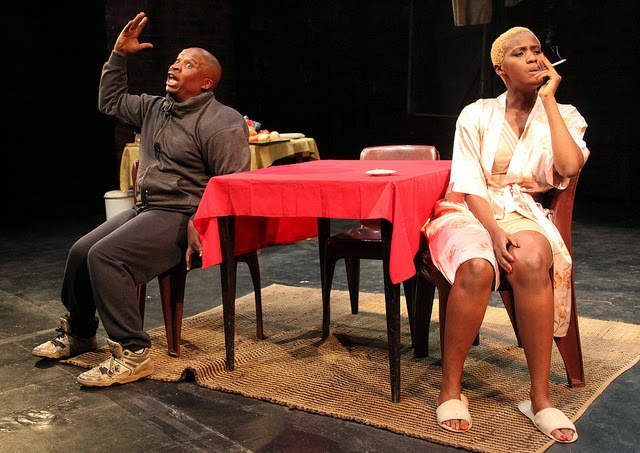 Set against the vibrant turbulence of the 1950s, Athol Fugard’s Nongogo follows the township romance between Queeny and Johnny as long buried secrets are revealed. Produced by Johannesburg’s Market Theatre, the play reflects on South Africa’s history as a rich and complex tapestry that both shapes and imprisons its people.

The Meal and Hatched are two works by multiple award-winning dancer, choreographer, teacher and activist, Mamela Nyamza. Although they are presented separately, both pieces interrogate the African dancer’s body and cultural ethos, while offering autobiographical explorations of Nyamza’s own identity as a dancer, an African and a mother.

In collaboration with Handspring Puppet Company (War Horse) and directed by William Kentridge, Ubu and the Truth Commission combines puppetry, live actors, music, animation and documentary footage in a performance laced with dark and sardonic wit. Drawing on original testimony from witnesses at the Truth and Reconciliation Commission and literary character Ubu Roi, an unprincipled buffoon created by the playwright Alfred Jarry, the play provides a glimpse into the devastating complexities of apartheid.

In Dominion, renowned choreographer Luyanda Sidiya presents a dance program inspired by the deep tribal energy he senses from his land and people. Presented as a double bill, the event includes performances of Umnikelo – which presents traditional African dance with a modern twist – and the title performance, Dominion, a searing contemporary work. In this program, Sidiya explores the levels of power that individuals possess, how this power is unleashed and how it can have a positive or negative impact on our society – be it in a social or political space.

Chandelier is a performance piece from Steven Cohen, an artist who stages interventions in both the public realm and in gallery and theatre spaces. In 2001, the township of Newtown in the centre of Johannesburg was pegged to be bulldozed overnight due to the living conditions in the area. Many of the residents weren’t provided with new accommodations, but were nevertheless evacuated in extremes. As both a live performance and video documentation of the public intervention, Chandelier is Cohen’s attempt to shine a light on this event. 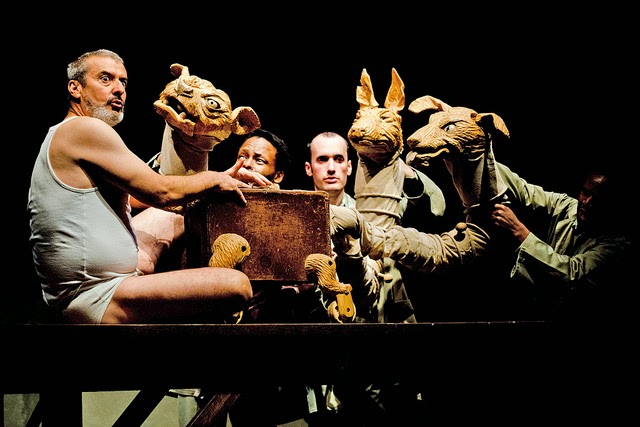 During the course of the festival Canadian Stage will host a range of ancillary programming events designed to engage audiences in the themes of the work and create opportunities for audiences to directly interact with artists featured in the festival. This programming includes pre and post-show chats, student workshops, and special events. Canadian Stage will also debut a new Artist Panel series conceived specifically for the festival. Each session will have a unique theme, artist participants and moderator. More information about Spotlight South Africa’s ancillary programming is available at canadianstage.com/online/spotlight.

A highlight of the festival’s additional programming is INTERMISSION: trans/formation. The fifth edition of the popular event series closes the festival on Apr. 25, and includes a performance of Chandelier followed by music featuring DJ Phil Villeneuve. INTERMISSION is Canadian Stage’s immersive event series that expands on their successful Berkeley Block Parties.  Now directly aligned with themes and ideas that stem from Jocelyn’s programming, INTERMISSION parties are live explorations of the ideas and topics featured in Canadian Stage’s season. INTERMISSION is generously supported by Make Up Forever, Steam Whistle Brewing and Tamm + Kit. 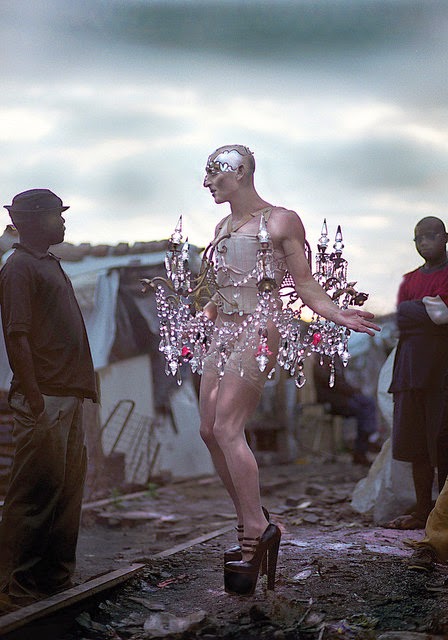 On March 30, Jocelyn hosts the third edition of Face to Face with Canadian Stage, a series of highly-curated art happenings that bring audiences together with cultural organizations from across the city. This edition, titled EXPLORE, partners with the Toronto South African Film Festival (TSAFF) and Education Without Borders (EWB) for a look at community-building and cultural expression at home and abroad. Jocelyn will facilitate a panel with Vanessa Judelman of TSAFF and Eleanor McGroarty of EWB, followed by a screening of a short documentary film from TSAFF. A $25 pass admits two guests to this final installment of the 14.15 season which includes a panel discussion, mingling and refreshments. Face to Face is generously sponsored by Steam Whistle Brewing, Whole Foods Market and Wines of South Africa.

Nongogo (Apr. 8 to 12), Ubu and the Truth Commission (Apr. 15 to 19) and Chandelier (Apr. 22 to 25) will be on stage at Canadian Stage’s Berkeley Street Theatre - Downstairs, with The Meal (Apr. 8 to 12) and Hatched (Apr. 15 to 19) being performed in the Upstairs Theatre (26 Berkeley St.). Dominion (Apr. 22 to 25) will be on stage at the Bluma Appel Theatre (27 Front St. E). Festival performances run Wednesday through Sunday at either 7 p.m. or 8 p.m. depending on the production. Certain productions will have Thursday and Saturday matinees at 1 p.m., and Sunday matinees at 1 p.m. and 2 p.m. Tickets from $30 to $99 are available online, by phone at 416.368.3110 or in person at the box office. For more information about show times and tickets visit canadianstage.com.

Shows and Tickets:
Tickets may be purchased by phone at 416.368.3110 or in-person at the Canadian Stage Box Office: Bluma Appel Theatre (27 Front St. E.) or Berkeley Street Theatre (26 Berkeley St.). Full details on the productions, casting and subscription packages are available online at canadianstage.com.