• Buy/Check out a Sample MP3

The third and last set in this series, completing the release of Handel’s Suites in a 2 CD set at mid price.

“It is impossible to praise this new release too highly. Fabulous playing. The combination of Handel, Gilbert Rowland, Wooderson’s fine harpsichord, the recording and the recording engineer John Taylor is unbeatable providing, as it does, a collection of these wonderful suites that I will return to again and again.” – Bruce Reader (The Classical Reviewer) 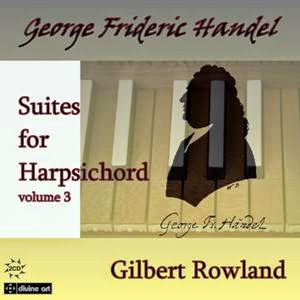 “A fine instrument, with silvery, bell-like timbres in the upper register and a richly sonorous bass. Rowland’s changes of registration for repeats are judicious and tasteful, revealing fully the beauties of his instrument. A highly satisfying version of Handel’s Suites … as the final notes die away, one is simply left with a strong temptation to shout “Bravo!”. – Brian Robins (Harpsichord & Fortepiano)

Handel’s solo keyboard music has for too long been overshadowed by his operas, oratorios, and orchestral music. This comparative neglect seems unjust in view of the considerably large quantity of keyboard music which exists amongst his massive output. This third double CD set completes Gilbert Rowland’s survey of these groundbreaking works which began to free the form from the formal constraints of “Allemande, Courante, Sarabande, Gigue”. Gilbert Rowland first studied the harpsichord with Millicent Silver. Whilst still a student at the Royal College of Music, he made his debut at Fenton House 1970 and first appeared at the Wigmore Hall in 1973. Recitals, appearances at major festivals in several countries, together with regular broadcasts, have helped to establish his reputation as one of Britain's leading harpsichordists. Reviewing volume 1, John Collins of The Consort said “The standard of playing is very high indeed, with some crisp articulation, appropriately added ornamentation in the repeats ... this is a most enjoyable recording.”

As well as being internationally recognised as a leading interpreter of music new and old, Peter Sheppard Skærved is the only violinist to have performed on the personal violins of Viotti, Paganini, Joachim, Kreisler and Ole Bull. In this new series, he plays music on these and many more instruments, many of which only he 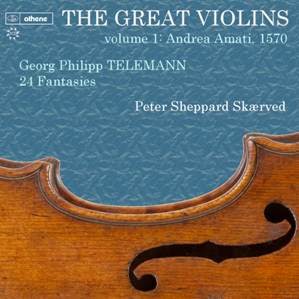 has access to. In this first 2-CD set Peter plays the incredible 1570 Amati in the 12 Violin Fantasies and 12 Flute Fantasies of Telemann. The instrument is of course gut-strung, is tuned A:416 and the bow is by Antonino Airenti. The Flute fantasies are also perfect for performance on the violin.

The series is supported by the Royal Academy of Music in London, the Library of Congress in Washington, D.C. and many other museums and institutions. Volume 2 will present the complete solo sonatas and partitas of J.S. Bach, played on the renowned ‘Joachim’ Stradivari of 1698.

Volume 2 should be released around the end of 2015, and the series will be open-ended with at least ten volumes planned so far. The Athene label, founded originally for historic piano recordings, has been re-launched to celebrate the commencement of this series.