• See details below for tickets

The Grammy Award winning Estonian National Male Choir, one of Europe’s leading professional choral ensembles, tours Ontario this May as part of its 70th anniversary celebrations. Between May 20 and June 1, the R.A.M Koor (Eesti Rahvusmeeskoor as it is known in Estonia) will perform seven concerts and give workshops in six Ontario cities, presented in co-operation with Choirs Ontario, Estonian Federation of Singers in North America, and the Cathedral Bluffs Symphony Orchestra.  This is its first Canadian visit in about 20 years.

Estonian Choir for release.jpgUnder the direction of its chief conductor and artistic director Mikk Üleoja, the choir will begin its tour May 23 at Dominion-Chalmers United Church in Ottawa.  On May 28, it will perform at SING! The Toronto Vocal Arts Festival, at Christ Church Deer Park.  A second Toronto concert sees the choir joining the Cathedral Bluffs Symphony Orchestra, Toronto Estonian Male Choir and conductor Norman Reintamm at the P.C. Ho Theatre in Scarborough, May 30.

Maestro Reintamm lauds the Choir as “one of the crown jewels of Estonian culture.  Its performances and recordings reflect Estonian music both centuries old and contemporary, as well as the great choral repertoire of the Baltic region and further afield.”

The Canadian premiere of Estonian composer Arvo Pärt’s Da Pacem Domini, in a new version for string orchestra and male choir highlights the May 30 orchestral concert with the Cathedral Bluffs Symphony Orchestra.  Also on the program are Mozart’s Ave Verum Corpus, Brahms’ Alto Rhapsody – with Canadian mezzo-soprano Christina Campsall – and works by other Estonian composers.

This Canadian tour of the Estonian National Male Choir is generously sponsored by The Estonian Cultural Foundation, Estonian Ministry of Culture, Estonian Foundation of Canada, and the Ontario Arts Council.  Alexanian Carpet and Flooring is the headline tour sponsor in Canada. 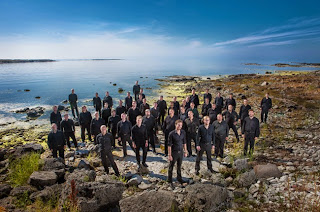 ESTONIAN NATIONAL MALE CHOIR –  Known in Estonia as the R.A.M. Koor, the Estonian National Male Choir celebrates its 70th anniversary this year. It was formed in 1944 by conductor Gustav Ernesaks, considered a founding father of choral music in Estonia. The choir, which originally sang a cappella, is now a world-renowned professional choir noted for its renditions of large-scale choral works. The choir has regularly recorded with Deutsche Grammophon, Sony, Finlandia, Alba Records, Virgin Classics and GB Records. In 2004, RAM won a prestigious Grammy award for Sibelius: Cantatas performed together with the Ellerhein Girls' Choir, the Estonian National Symphony Orchestra and conductor Paavo Järvi.  RAM has performed more than 6,000 concerts in Estonia, in major cities of the former Soviet Union and in countries across Western Europe as well as in Israel, Canada and the United States. During its anniversary season, the choir will give concerts at several venues in Estonia as well as in Israel, Canada, France (Festival de la voix de Chateauroux) and Germany (Hanover).  Since 2011, its chief conductor and artistic director has been Mikk Üleoja.

Info on the R.A.M. Koor`s recordings may be found at http://www.concert.ee/recordings.

More information on the tour is at www.facebook.com/estotour, or may be obtained by e-mailing ramtour@artset.net.