eight pieces of the series, including his much talked about ‘Incident’, the shot up school bus sculpture which toured Washington DC in April of 2013 during the height of the U.S. gun debate.

Mitic is best known for his controversial approach to art, firing live ammunition at images he has painted of celebrities and iconic personalities.   His bullet-riddled paintings offer an acerbic commentary on society’s attitudes towards guns and violence and its obsession with fame.  Moved by the destruction of the giant Buddhas of Bamiyan - ancient sculptures created in the 6th century –Viktor Mitic started exploring the symbiotic relationship between aesthetics and violence. 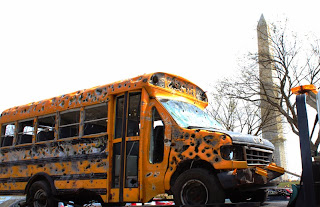 contemporary issues,” says Louis Perticone, Founder of ARTISANworks.  ARTISANworks will launch their new Mitic collection this month. The exhibition will open to the public on May 17th, (1:00-4:00 pm) at ARTISANworks, 565 Blossom Road, Rochester, NY.The dates for the exhibit is: May 17th, 2015 through August 23rd, 2015.

“I am very pleased about this acquisition of Mitic’s work, in my opinion the entire series of paintings included in the Art or War book plus  Mitic’s controversial ‘Incident’ sculpture which caught the attention of numerous U.S. collectors could have an estimated evaluation of around $450K,” stated Corrado Deluca of Toronto's Deluca Gallery.

Co Founder, ARTISANworks Kimberly Trenholm stated, “The exhibit will offer an opportunity for visitors to join in the visual commentary on his often controversial entire body of work, while viewing

the extensive 58 piece series that is being exhibited together for the first time ever in the U.S.”

Mitic’s paintings are being shown at the prestigious Masterworks from the Beaverbrook Art Gallery in New Brunswick, Canada since May 2nd at the front entrance of the exhibit.  Mitic’s painting joins this exhibit of iconic paintings currently showing after spending two years touring North America augmented of some of the world’s most prominent artists – Turner, Carr, Sargent, Constable, Delacroix, Gainsborough, Copley, Sisley, Matisse, Freud, Dali, and many, many more – which will once again grace the walls of the Gallery in a spectacular blockbuster presentation occupying the main floor of the Gallery. 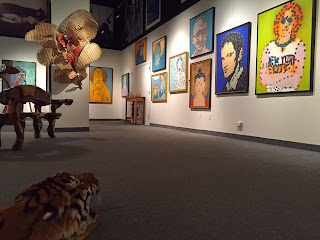 portrait of the founder of the gallery, Lord Beaverbrook, is currently a part of Masterworks exhibition.

About ARTISANworks:
ARTISANworks is a unique, 15year-old 501(c)3 not-for-profit organization founded by Louis Perticone and Kimberly Trenholm. ARTISANworks is located in a previously abandoned factory building and integrate art of all kinds, events and entertainment.  Not government funded, but on generous support from both personal and corporate members, donations of artworks and memorabilia, income from events arranged by its for-profit affiliate (Artisan Events, Inc.), and the sale and rental of art and other objects from our extensive collection of over a half-million items.  We are quite satisfied that our model can be successfully duplicated elsewhere.  Items from our collection can be used to seed similar facilities in other cities. Over 60% of our visitors are from other cities across the U.S. and around the world.  565 Blossom Road, Suite L, Rochester, New York 14610