• Early-bird Conference Registration For Only $99 Is Now Open At LatinAlternative.com
• Discounted hotel rates now available at the link

Helado Negro, and Compass on July 8 and Vicentico, Ximena, and No Te Va Gustar on July 11. Plus, we’re  returning the LAMC to the Bronx with a showcase at St. Mary’s Park with Our Latin Thing and DJ Afro on July 7th.

Now in its 16th year and called the "Sundance of Latin music", the LAMC features free concerts at SummerStage in Central Park and Celebrate Brooklyn at Prospect Park, plus intimate private concerts at various venues around the city. The LAMC also includes industry panels and Q&A’s with special guests, showcases and other events that are soon to be announced.

Born in Caracas, DJ Afro (aka José Luis Pardo) is a Brooklyn based guitarist, DJ, composer and producer, and was a founder of Los Amigos Invisibles. A Grammy award winner and six-time nominee, Pardo began his DJ career in Caracas, where club owners quickly took notice of his eclectic musical tastes and natural ability to move any dance floor, and began booking him in the hottest spots all over town. Through his studio recordings, remixes, compilation albums, mixtapes, and live performances, Pardo has amassed a stellar body of work rich with soul and flavor. He now has over 50 remixes under 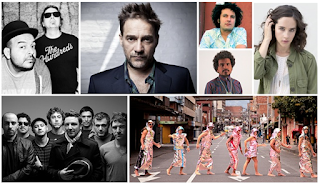 In August 1971, New York gave birth to a sound that would change the face of Latin Music forever. That evening at the renowned Cheetah Nightclub, Jerry Massucci, president of the legendary label FANIA, presented an ensemble of its best artists- The Fania All-Stars. The show was billed as "Our Latin Thing". In the decades ahead the Fania All-Stars would become the ambassadors and juggernauts of salsa around the world. They became the musical reflection of the times, needs, and struggles of New York's Latino community. Their music was "Salsa Gorda", influenced by American Jazz, Soul, and Rock and Roll. Their music became part of Americana. In 2010 an ensemble of 17 musicians debuted to pay tribute to the legendary group. Billed as "Our Latin Thing", the group performs as an assortment of the All Stars' top hits. This Musical/Theatrical like revue takes the audience on a musical poetic journey. "Our Latin Thing", in it's own right, is an All Star group, made up of lead singers and musicians of New York's top young bands.

Systema Solar is a musical-visual collective from the Caribbean coast of Colombia. Through live 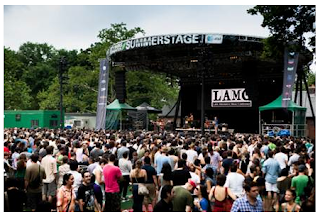 performance, music, video, and theatrical costumes, Systema Solar is a complete, immersive experience, best described as “Tropical psychedelia.” With an innovative approach towards nu-Colombian music, their music is old school cumbia samples partnered with techno fierceness, carnivalesque euphoria with streetwise politics and humor mixed in. Their two albums, the self-titled debut "Systema Solar," and the recent "La Revancha del Burro" have taken the band to new heights within the local scene and internationally, as the band has performed at SXSW, Glastonbury and Roskilde.

A South Florida native, born to Ecuadorian immigrants and based in Brooklyn, Helado Negro aka Roberto Carlos Lange’s upbringing provides essential elements to his songwriting, including his consistently bilingual – English and Spanish– lyrics. While citing the influence of electro and Miami-bass he heard on the radio in his youth, his diverse work as Helado Negro points to shades of kraut rock bathed in his mesmerizing rhythms, loops and hair-raising melodies. Known for his craftsmanship, Lange has cultured his identity, ideology and musical dexterity with constant artistic and introspective development, pouring his heart and full sincerity in his music. His fourth LP Double Youth released in 2014 garnered acclaim with Pitchfork naming it “the boldest and most intricate Helado Negro work to date.”

Vicentico has long been a crucial figure in the history of rock music in Latin America.  On top of a significant career as the lead vocalist of Los Fabulosos Cadillacs, he is also recognized for being a successful solo artist.  With six platinum solo albums under his belt, international tours, and MTV, Gardel, and Latin Grammy awards, Vicentico recently released the album, “Ultimo Acto.” Recorded in Los Angeles, New York, Nashville, Kingston, and Buenos Aires, “Ultimo Acto” features collaborations with Willie Nelson, Sly & Robbie, Intocable, Vaeria Bertuccelli, Our Latin Thing, and offers new takes

on some of Vicentico’s most beloved and well-known hits.

Ximena Sariñana is a Mexican singer-songwriter and actress. Sariñana received critical acclaim and a Grammy nomination for her debut album, "Mediocre," which was also nominated for two Latin Grammy awards for Best New Artist and Best Alternative Song. Sariñana has worked with musicians like Omar Rodriguez-Lopez and Jason Mraz. Her second, self-titled album was released in 2011, and her third studio album, "No Todo lo Puedes Dar", was released in November 2014.

Latin Grammy nominated No Te Va Gustar was formed in 1994 in Montevideo, Uruguay.  A blend of rock, pop, and reggae, their music mixes heartfelt and intelligent lyrics with a unique sound that blends local and international influences. No Te Va Gustar has released eight studio albums, all of which have gone Gold or Platinum in Uruguay and Argentina, and three live DVDs, No Te Va Gustar originally started as a trio but later expanded and added new styles of music to its repertoire such as reggae, candombe, salsa, ska and murga. With a career spanning over 20 years, No Te Va Gustar has been on tour over the last decade performing to fans worldwide