G. Smith (MC). Shows run 8 p.m. – 10 p.m., and take place in The Garage, at the Centre for Social Innovation - Annex location, 720 Bathurst Street, Toronto. $15 tickets available on a first-come, first-serve basis at www.livefromtheannex.com. Follow on Twitter #LFTAnnex and Facebook. For information, call (416) 619-4621 or send an email to livefromtheannex@gmail.com. The comedy and music show is broadcast live to the world-wide web via Dailymotion.com/YouAndMedia.

Rick Miller and Steph Baptist are treating the audience to a glimpse of his solo show, BOOM, and her poetry in the style of Dr. Seuss (for grown ups). Having loved the cabaret scene in Montreal “back in the day,” they are thrilled to have this new option in Toronto. Together 20 years, Rick and Steph have been sharing stages since they met. Starting with Shakespeare-in-the-Park and cross-country tours of Fringe Festivals, they now play with a community-based party band, TRAINWRECK, and have workshopped Rick's new play, Twenty Thousand Leagues Under The Sea, which will premiere this summer at the TO2015 Pan Am/Parapan Am Games.

2-MAN NO-SHOW (2012 & 2014 Canadian Comedy Award and NOW Magazine Best-of-Toronto Nominees) are otherwise widely known as the absurd and unpredictable tag-team duo of Isaac Kessler and Ken Hall. About playing on June 2, Kessler says, “We can't wait to play! We're working on new material so who knows what might happen!”

Mia Sheard launched into a career as a singer/songwriter after discovering her voice in a musical sketch comedy piece for Second City's Master Class. She has since logged over twenty years of performing and touring, and has released four albums of her own material. She created "Songs Are Like Tattoos," a tribute to Joni Mitchell, which she hosts every year at Hugh's Room, and she performs regularly with Classic Albums Live. Mia also maintains a busy practice as a Psychotherapist. “I love improv,” Sheard says, “The best performances occur in the moment without thought. I plan on not thinking at Live from the Annex.” 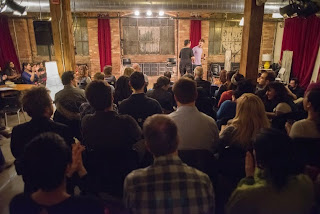 Not only a cabaret series promoting Toronto comedy and music artists, ‘Live from the Annex’ also showcases the work of social innovators. On June 2, The Concerned Kids is being profiled from the stage. It is a non-profit organization based out of the Centre for Social Innovation Annex location that educates and empowers children and youth, ages 6 - 12, through educational and interactive puppet presentations about relevant social issues that are faced by children and are of concern to them.

Rounding out the program is Brunswick Stew, Annex Improv’s Performance Ensemble. This group will be featured in a live-on-stage Improv lesson - a ‘visible classroom’ led by Smith. Performers include members of the Performance Ensemble classes and surprise guests from the professional Improv community.

‘Live from the Annex’ shows take place the first Tuesday of the month (July 7; August 4; September 1; October 6; November 3; and, December 1, 2015); doors open at 7:30 p.m., with curtain at 8 p.m. Refreshments are offered for sale before, during and after intermission. Hummus and chips are provided gratis.